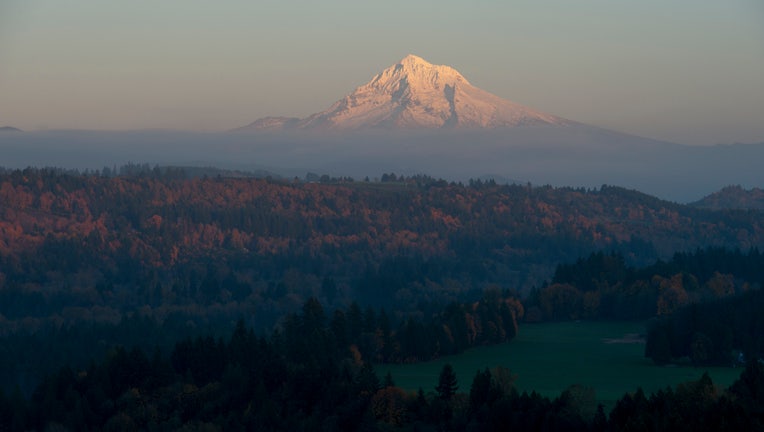 OREGON, UNITED STATES - 2014/11/07: View in the fall from Jonsrud Viewpoint of the Sandy River valley, the Cascade Mountains and Mt. Hood near Sandy in Oregon, USA. (Photo by Wolfgang Kaehler/LightRocket via Getty Images)

The Oregonian/OregonLive reports investigators are hoping the information will help them determine what led to the death of 19-year-old Wanda Ann Herr.

The mystery began in 1986 when two Forest Service workers happened upon the partial skull, some bone fragments and a tooth near Government Camp off U.S. 26, said the Clackamas County Sheriff’s Office, which is overseeing the investigation and issued a news release.

More than a week after the discovery, a forensic examiner with the Oregon State Police determined the remains belonged to a young woman or a small man and the bones had likely been in the forest for 10 years or more.

Then the remains sat in evidence for more than two decades until in 2008 a state forensic anthropologist re-examined them and developed a better victim description: the bones belonged to a woman in her late teens to early 20s.

With that new information, an imaging specialist created a facial reconstruction using clay. The reconstruction generated leads, officials said, but ultimately resulted in no forward momentum.

Another decade passed and, in 2019, the Oregon State Medical Examiner’s Office received a grant to begin DNA analysis on more than 100 sets of unidentified remains, the Mount Hood skull among them.

“This new info, combined with extensive genealogical research, soon revealed a likely name for the young woman: Wanda Ann Herr, born in 1957,” the sheriff’s office said in a statement.

Investigators were able to track down Herr’s surviving sisters, who told officials that she had disappeared sometime after June 1976 while possibly living in a group home near Gresham.