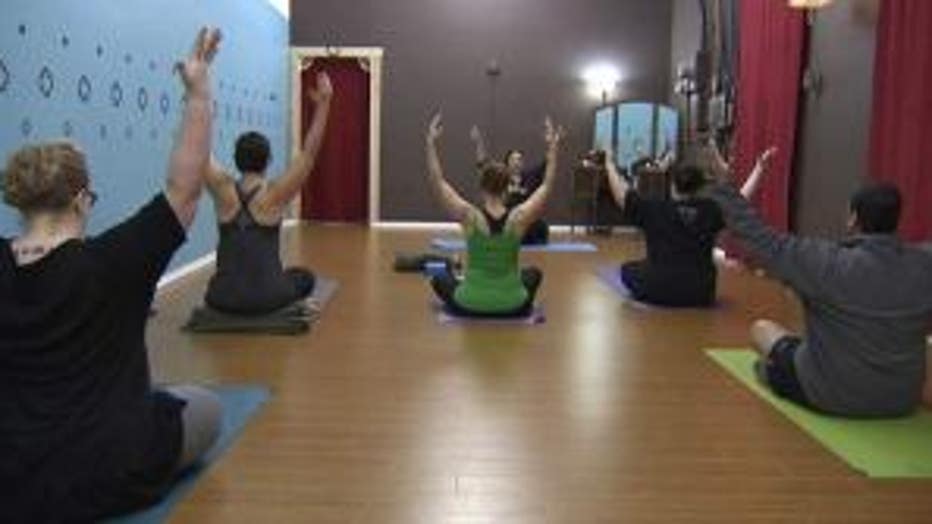 PORTLAND, Ore (KPTV) -There's nothing unusual about the southeast Portland storefront until you look closer at the sign on the window and see a tiny word with a ponderous meaning.


Fat Yoga is the name of this new yoga studio.

Fat, F-A-T, just three letters of the alphabet, that for some, might as well be a four-letter word.

"I say I'm fat cause, guess what, I know I'm fat," said Anna Ipox, the owner of Fat Yoga. "Our American script says, 'No, you're not fat, just some other euphemism, thick, fluffy, big-boned, portly whatever.'"

"It's an emotional word, it has a lot of baggage and it's very fraught, so using it in this context sort of takes that away," said Marianne Luther, one of the first people to sign up for

The Centers for Disease Control has said more than a third of Americans are obese and the benefits of exercise, including yoga, are undeniable. But let's be honest, the typical yoga stereotypes are skinny bodies.

A yoga follower since 2001, Ipox said she always felt there were some yoga poses made more difficult by her bigger size.

"Child's pose is impossible of you have belly fat or thick thighs," she said. "They just have no idea what it is to have a big body. I remember teachers pushing on my hips to make it happen. It's not a flexibilty thing and I couldn't articulate any of that."

She said she never felt fat prejudice and has never dieted. But the yoga teacher told FOX 12 when a doctor suggested lap band surgery to lose weight, despite her overall excellent health, she felt what she calls "fat bias" for the first time.

Open since January, Ipox said the studio's provocative name is not a gimmick, but rather a social statement. She thought about other possible names, such as plus-sized yoga.

"It just became so clear that Fat Yoga was so simple," she said.

And her message has struck a chord with some who said they've felt uncomfortable taking yoga classes in the past.

"I definitely had issues. Instead of going to class and having a bad experience, I just stayed away from it," said Luther.

"We come here to have that space and hold that space and be healthy and get our sweat on and laugh and have a good time," said class participant Melissa Brown. "I really think she nailed it right on the head. Yoga for fat people. Fat Yoga."

Ipox is not advocating people avoid weight loss and her classes are open to all shapes and sizes. She does, however, embrace the chance to help reclaim a word she says has been synonymous with shame.

"There's a responsibility as a fit woman of size to be visible and challenge those stereotypes," she said.

The CDC recommends the average adult get two hours and 30 minutes of moderate to intense aerobic exercise weekly, in addition to muscle-strengthening activities. The government does not have any specific guidelines regarding yoga. For more information, go to www.cdc.gov.

Consult your doctor before starting any new exercise program.

For more information about Fat Yoga classes, go to fatyoga.org.