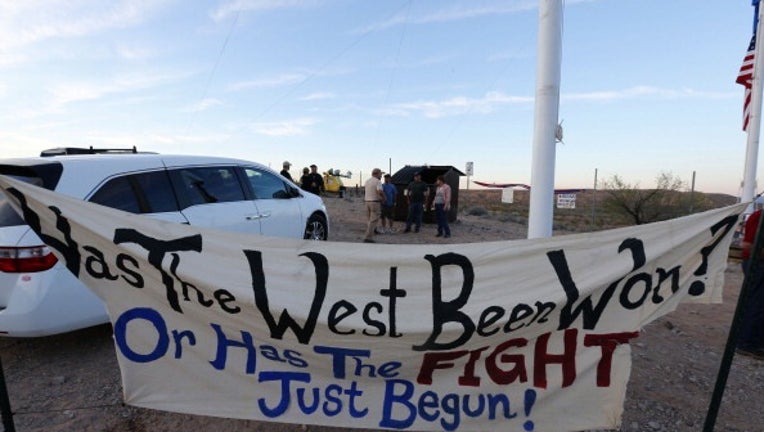 Protesters hang signs along US. highway 170 protesting the closure of thousands of acres of Bureau of Land Management land that has been temporarily closed to round-up illegal cattle that are grazing south of Mesquite Nevada on April 10, 2014 in Mesq

MESQUITE, Nev. (CNN) -- A 20-year dispute between a Nevada rancher and federal rangers over illegal cattle grazing erupted into an Old West-style showdown on the open range this week, even prompting self-proclaimed members of militia groups from across the country to join the rancher in fighting what they say is U.S. "tyranny."

What began as a legal fight between longtime rancher Cliven Bundy and the U.S. Bureau of Land Management has escalated as Bundy kept his cattle on the federal land, and the government has responded by beginning roundups of the livestock.

A confrontation teetered on violence Wednesday when Bundy family members and dozens of supporters angrily confronted a group of rangers holding Tasers and barking dogs on leashes near Bunkerville, about 80 miles northeast of Las Vegas.

Federal officials say a police dog was kicked and officers were assaulted.

Bundy family members say they were thrown to the ground or jolted with a Taser.

In the end, the rangers got into their white SUVs and drove away, a YouTube video of the incident showed.

"Get out of our state!" the cheering protesters yelled at the rangers as they departed in several vehicles. "BLM go away! BLM go away!" they added, referring to the Bureau of Land Management.

The entire incident is now under investigation, Amy Lueders, the bureau's director in Nevada, said Thursday.

To some, the 67-year-old Bundy is a hero who hails from a long family of ranchers stretching back to the Wild West.

To environmentalists and the feds, however, he's an outlaw of sorts who owes U.S. taxpayers more than $1 million in unpaid grazing fees.

The U.S. government is rounding up Bundy's cattle that it says have been grazing illegally on public lands in Clark County for more than 20 years, according to the land-management bureau and the National Park Service.

Between Saturday and Wednesday, contracted wranglers impounded a total of 352 cattle, federal officials said. Bundy says he owns 500 of the more than 900 cattle that federal officials are planning to confiscate for illegal grazing, the Las Vegas Review-Journal reported. Bundy told the newspaper that each head of his livestock is worth about $1,000.

Bundy's dispute with the government began about 1993 when the bureau changed grazing rules for the 600,000-acre Gold Butte area to protect an endangered desert tortoise, KLAS reported.

Bundy refused to abide by the changes and stopped paying his grazing fees to the federal bureau, which he contends is infringing on state rights. His family has been ranching since the 1800s, before the U.S. Department of Interior was created and endangered species became a federal issue, he said in an interview with KLAS.

"My forefathers have been up and down the Virgin Valley ever since 1877. All these rights I claim have been created through pre-emptive rights and beneficial use of the forage and the water. I have been here longer. My rights are before the BLM even existed," Bundy told the station.

And Bundy sees it as a state issue.