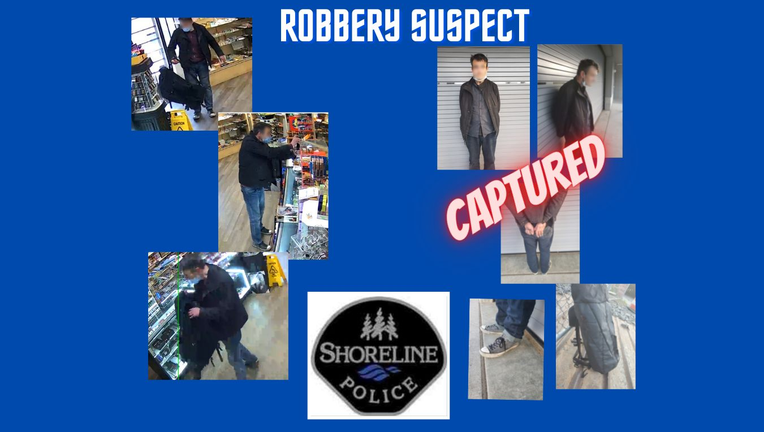 SHORELINE, Wash. - Police officers located and arrested a suspect who used pepper spray to rob a convenience store on Monday.

According to the Shoreline Police Department (SPD), on May 24 at around 6:00 p.m., officers were dispatched to a robbery at a convenience store on Ballinger Way NE near Brugger’s Bog Park. Authorities say the suspect walked into the store and asked to look at an item in the counter showcases. As the employee bent over to open the case, the suspect sprayed him with pepper spray. The suspect then stole about 250 packs of cigarettes worth about $2,500 and left the scene.

Investigators say they were able to swab for DNA and managed to capture a partial fingerprint at the scene. The store’s security cameras caught the incident on video, showing a suspect dressed in blue jeans, black jacket, a blue facemask and a large black backpack.

At around 7:00 p.m. on Monday, officers were on a routine patrol in Shoreline at the I-5 overpass and spotted someone who matched the robbery suspect’s description. After comparing photos from the robbery to the suspicious looking man, officers stopped and arrested him without incident.

The alleged suspect was booked into King County Jail for robbery.

Pierce County Sheriff's Office are searching for a suspect who robbed the Handy Corner Store in Puyallup. Authorities are urging anyone with information to send a message or submit an anonymous tip to Crime Stoppers.