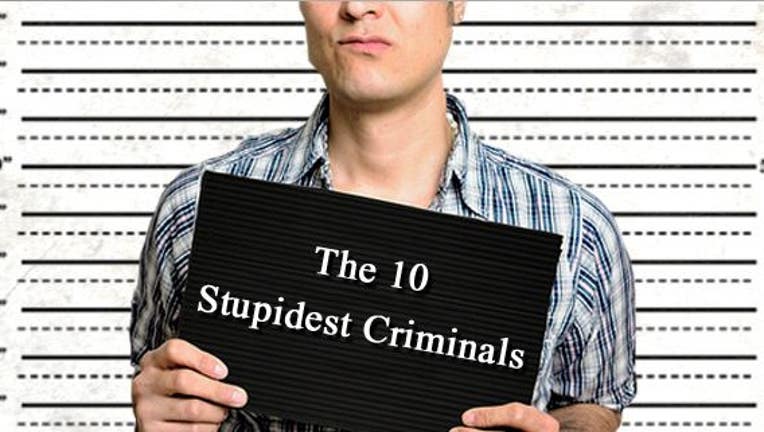 10. Police: Men used can of soup, curtain rod in fight over bad drugs

An argument over bad drugs and a woman turned violent in Pioneer Square, police said, leaving one man with a head wound from a curtain rod attack.

According to the Seattle Police Department, a patrol officer heard shouting coming from a bus shelter at 2nd Avenue Ext. S. and Main Street. When police investigated they found a man standing on the sidewalk with blood coming from the back of his head.

The bloodied man told police he was walking down 3rd Avenue when a man came up behind him and struck him with a metal curtain rod. The victim said the two were fighting over bad drugs and woman, police reported.

When police interviewed the suspect he said the victim had thrown a can of soup at him, justifying the curtain rod attack.

Officers booked the curtain rod-wielding suspect into the King County Jail for assault.

Police arrested a 13-year-old Whatcom County boy Wednesday after he allegedly prompted a false bomb threat at his middle school in order to catch up on homework.

The boy reportedly called 911 at 8 a.m. Sept. 26 and said that Nooksack Valley Middle School would "blow up" in two hours, Everson police told the Bellingham Herald. Police traced the call to the boy's home, but found he had already boarded a bus to school. Officers waited until the bus finished its route, then arrested the boy after it dropped him off at the middle school at 9:45 a.m.

The boy told officers he felt overwhelmed by schoolwork and needed an extra day to catch up, the Herald reported.

He had also been suspended from school and it would have been his first day back, but the school's principal declined to tell the Herald why the boy had been suspended or what the punishment for the bomb threat will be.

After officers found no sign of a bomb threat, the students were bused back to the school at 10:30 a.m.

Officers booked the boy into juvenile detention. Everson Police Chief Erik Ramstead told the Herald he doesn't think the boy will be a regular source of trouble.

"Judging by mom's reaction, and his reaction, this was a new thing," Ramstead told the Herald. "Hopefully he learned his lesson."

8. Man who claims his 'clothes kept falling off' arrested in Lacey

A naked man strolling up and down a Lacey street the morning of Sept. 19 was arrested by police after multiple warnings to cover up, the Tacoma News Tribune reports.

According to the News Tribune, the 39-year-old was spotted walking naked on Pacific Avenue between the Interstate 5 interchange and Lilly Road. Police dispatchers became so inundated with 911 calls reporting the man, responders asked callers if they were calling about the "naked man on Pacific," dispatch supervisor Tammy Clark told the newspaper.

Olympia police officers spoke to the man three times and issued two warnings before arresting him for disturbing the peace, the News Tribune reported. Olympia Police Sgt. Rich Allen said that multiple bystanders offered him clothes as he walked past.

"He was naked and bystanders had tried covering him up with sleeping bags and offered him articles of clothing to put on," Allen told the News Tribune. "When the officers showed up he'd put on the article and when officers left, he'd take it off again."

The man said "his clothes kept falling off," Allen said.

On the evening of July 5, homeowners in Spokane reported a burglary. They told police that when they returned from out of town trip, they were missing several firearms, valuable coins — and a Craftsman riding lawnmower.

Lucky for them, at about 9 a.m. that morning, deputies responded to the area of Linke and White Roads to a report of a suspicious person riding a lawnmower down the road. It was also reported that the man appeared to be carrying some type of rifle or shotgun.

Deputies were unable to locate the armed man riding lawnmower in that area, but did find an abandoned lawnmower near 19200 East Belmont Road a short time later, which was impounded for safekeeping as it had not yet been reported stolen.

Later that afternoon, about 1:30 p.m., deputies began receiving calls of a suspicious person walking near Belmont and Linke Roads, which was near where they had found the lawnmower. When they arrived, deputies saw Robert Morey, 22, sitting on an embankment. After providing his name to deputies, they discovered Morey had an outstanding felony warrant for escape.

Morey did not have any firearms with him at the time he was taken into custody, but he did show deputies where he had thrown them on the side of the road.

Later that evening, after receiving the call about the home burglary, deputies interviewed Morey in jail. He admitted to stealing a shotgun, rifle and pistol and said he discarded one of the weapons on the side of the road because he thought it would weigh down the lawnmower. Morey also said he dropped the pistol when he stole the lawnmower because he couldn’t carry everything.

He also told deputies he took the guns because he was prohibited from having firearms and wanted a gun. Morey said he abandoned the lawnmower because he ran out of gas.

Morey is currently in the Spokane County Jail on multiple charges of unlawful possession of a firearm, first-degree burglary, firearm theft and second-degree theft.

An Oregon man may be a contender for the bad father of the year award after allegedly letting his young son take the wheel when he had a few too many.

An Oregon State Police trooper pulled over a GMC Envoy near The Dalles, Ore., about 10:45 a.m. Sunday after observing the vehicle weaving between lanes with its hazard lights flashing. At one point, the car also stopped in the middle of the road.

When the trooper approached the driver’s side window, he was shocked to see a 10-year-old sitting behind the steering wheel and his 34-year-old father in the passenger seat. The man had allegedly been steering while his son operated the brakes and accelerator.

After the trooper observed several open containers of alcohol at the father’s feet and in the back seat, he was placed under arrest.

The man’s drink of choice: Bud Light and Clamato Chelada — a 24-ounce concoction of Budweiser and Clamato tomato juice. A six pack was recovered from the vehicle— at least five of which were open.

After police called the suspect’s wife to come and pick up her son, they determined she had come to the scene without a valid driver’s license. A family friend finally arrived on the scene and drove the boy and his mother home.

The suspect was booked into the Northern Oregon Regional Correctional Facility for investigation of DUI, reckless driving and recklessly endangering another person.

5. Talk about a bad day: Man shoots self in genitals, gets arrested

A convicted felon accidentally shot himself in the genitals, The Oklahoman reported.

Adding insult to injury, he was then arrested when police discovered that because of his previous record, he is not allowed to have a gun.

Tavares Donnell Colbert, 36, told police he had purchased the gun on the street in Kansas and was planning on selling it to someone he was meeting at a convenience store, the paper said.

It was on his way to the convenience store that things went awry. Colbert said he pulled over prior to his destination to make sure the gun was working properly, and that's when he accidentally discharged the weapon and shot himself in the genitals.

He drove himself to a nearby hospital and it was there that someone from the emergency room contacted police. After Colbert was treated, he was arrested.

4. Man accidentally shoots himself while 'fishing' for salmon

A Thurston County man out "fishing" for salmon with a .22-caliber rifle accidentally shot himself Sunday afternoon on the Deschutes River, the Olympian reported.

According to the Olympian, the man told Thurston County sheriff's deputies he fired a shot into the river about 4:50 p.m. near the 9600 block of Old Highway 99. The bullet ricocheted off a rock and grazed the man in the side of the head.

He told police that when he went to scratch the the injury, a bullet fell out of his scalp.

The man returned to his home and would not tell his girlfriend what happened, the Olympian reported. She called 911 and sheriff's deputies contacted the man a short time later. He was treated at an area hospital for his injuries.

The man's girlfriend told police her boyfriend often uses a gun to shoot salmon. He was not cited with any criminal violations.

A Yakima man was busted for operating a marijuana grow operation after his girlfriend's nine-year-old daughter unknowingly ate a pot brownie from the cookie jar, according to court documents. The girlfriend was arrested soon after.

Hospital officials contacted child protection services, who in turn contacted the DEA, according to court documents. Investigations revealed that the mother, a nurse in the Yakima County Jail, had received the marijuana from her boyfriend.

The nine-year-old girl's father, who is estranged from the girl's mother, informed the DEA that he believed the suspect to be a marijuana dealer. Further surveillance corroborated that information.

On Friday, April 20, DEA agents and Yakima County Sheriff's Office executed a federal search warrant at the home, where they arrested the suspect and seized the marijuana plants, pre-packaged baggies of processed marijuana and steroids.

A short time later, the girlfriend was arrested as well. She admitted to police that she was aware of the grow operation.

It was mid-flight when a male passenger exposed himself to at least one flight attendant.

The Southwest Airlines flight was flying from Albuquerque to Sea-Tac when the man flashed the attendant.

The captain of the plane asked that authorities meet the plane at the gate at Sea-Tac. The man was detained by Port of Seattle police, and the case was referred to the FBI.

There were 126 passengers on board and a crew of five.

Everett Police said five baristas are in trouble for offering more than just coffee at an Everett espresso stand.

Everett Police Sergeant Robert Goetz said police concluded a two-month investigation where they found "terribly inappropriate" and lewd behavior. Five women from the Grab-N-Go espresso stand in the 8000 block of Broadway in Everett have been charged with prostitution and violating the city's Adult Entertainment ordinance.

Police started their investigation after tips came in from customers.

"For extra money these women would expose their entire body. If they were wearing a bikini they would either take it off or at least lower it. There were some allegations, complaints from our citizens that they were performing whip cream shows between two women," Goetz said.

Police said in one instance an alarm went off at the espresso stand and when officers responded, they found a naked barista.

The owner of the business, Bill Wheeler, said the women who work at the Grab-N-Go all sign a policy prohibiting the kind of behavior alleged by police. Wheeler said the policy will be strictly enforced and any violation means immediate termination.

"Any girl caught doing anything illegal will be fired on the spot," he said. "Every girl that works for us knows that our policy states clearly acceptable attire for work. They must cover their bottoms and use pasties, if necessary."

Wheeler said no whip cream on bodies or sexual gestures are allowed. He also said he can't control everything the baristas do.

Police said they were getting tips from other locations and investigations are ongoing.