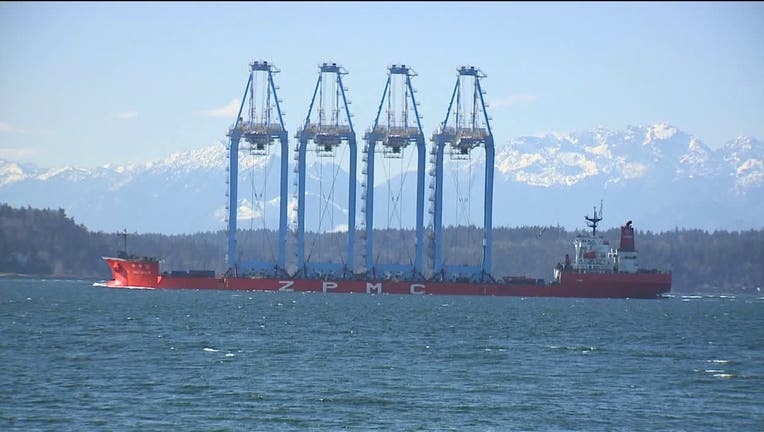 He had no idea.

In a twist that Poses never could have predicted, his game itself would become caught up in the latest fallout from the health crisis: a backlogged global supply chain that has delayed shipments around the world and sent freight costs rocketing.

Worst-Case Scenario, produced in China, was supposed to reach U.S. retailer Target’s distribution centers in early June. Instead, the games were stuck for weeks at the Port of Seattle and didn’t arrive until mid-July.

"It’s consuming my life," said Poses, who started his Miami Beach, Florida-based toy company All Things Equal in 1997, selling games from the trunk of his car. "You do everything right. You produce on time. You’re psyched about your product.’’

And then ... unforeseeable disaster.

Like other importers, Poses is contending with a perfect storm of supply trouble — rising prices, overwhelmed ports, a shortage of ships, trains, trucks — that is expected to last into 2022. The experience proved disturbing enough that Poses is reconsidering a cost-saving decision he made five years ago: to shift production of his games and toys out of the United States to China. Now, he thinks, it might make sense to bring production back — at least to Mexico, if not the United States — to protect him from the risks of relying on factories an ocean away in China.

"I’m willing to make smaller margins," he said, "if it means less anxiety."

Other American companies are making similar calculations: 52% of the U.S. manufacturing executives surveyed by the consulting firm Kearney said they have started buying more supplies in the United States in response to COVID-related supply disruptions. Forty-seven percent said they plan to reduce reliance on supplies or factories from a single country; 41% specifically said they wanted to cut their dependence on China.

And not just because of the virus-related bottlenecks in shipping, severe as they are. Companies are worried, too, about becoming caught in the crossfire of a trade war between the United States and China, the world’s two biggest economies.

But neither Chinese leader Xi Jinping nor Trump’s successor, Joe Biden, appears to be in a hurry to seek peace.

"The whole relationship is in bad shape," said Rosemary Coates, a longtime consultant to companies wanting to establish factories in China.

In America, there is bipartisan frustration over China’s sharp-elbowed trade practices — which, critics say, includes cybertheft — as well as its crackdown on civil liberties in Hong Kong, repression of Muslims in Xinjiang and bullying of neighbors in South and Southeast Asia.

"Are we in a 21st century version of the Cold War? Yes," said trade lawyer Michael Taylor, a partner at King & Spalding. "The endgame is not nuclear annihilation. The endgame now is economic dominance.’’

For decades, companies have piled up profits by moving manufacturing to China and other low-wage countries, then exporting their products back to the United States. They have also held down costs by keeping inventories to a minimum. Under a "just-in-time" approach, factories buy materials only as they need them to meet orders.

But relying on distant factories and keeping inventories threadbare is risky. In March 2011, an earthquake and tsunami damaged auto parts plants in northwestern Japan. The resulting parts shortages temporarily idled car plants around the world, including some in the United States — a sobering reminder that lengthy supply chains are vulnerable to disruption.

But they’d never seen anything like what COVID-19 inflicted on global commerce.

As countries locked down and families took refuge at home in February and March last year, companies sold off inventories and canceled orders from suppliers. And the economy did, in fact, collapse: In the United States, gross domestic product, the broadest measure of economic output, fell at a 31.2% annual rate from April through June 2020 — the worst quarter in records dating to 1947.

Then something unexpected happened.

"What nobody knew was that when you send everybody home, the first thing we all do is shop" online, said Lewis Black, CEO of Almonty Industries, which mines the rare metal tungsten. "You had, on one hand, inventories being run down and manufacturing ground to a halt, and on the other, people were spending like crazy.’’

Fueled by pent-up consumer demand, especially as vaccines allowed economies to reopen and families to get back outside again, growth roared back. The U.S. economy expanded at a stunning clip — a record annual rate of 33.8% from July through September 2020 — and kept chugging along, most recently registering a healthy 6.5% annual growth rate from April through June this year.

Suddenly, companies were overwhelmed with orders they couldn’t meet.

"They had an oops moment," Black said.

"It’s a classic case of overreacting on the front end and having to play catchup," said Tom Derry, CEO of the Institute for Supply Management, an association of purchasing managers. "No one really foresaw the strength in the surge of demand .... Supply just can’t keep up.’’

As companies hurried to meet surging demand, the cost of raw materials soared: The price of oil is up more than 70% over the past year, aluminum 55%. Tin prices have doubled. The price of high density polyethylene blow-molded plastic — common in bottles, fuel tanks, industrial drums and other products — has surged 157%, according to the Plastics Exchange spot market.

Freight costs shot up, too, as companies tried to book shipping containers. The Baltic Dry Index, which measures shipping costs, has rocketed more than 700% since mid-May 2020.

Getting products onto container ships was hard. But that wasn’t the end of the trouble. Ports were overwhelmed when the cargo arrived.

"They couldn’t get the ships in and out," said Richard Gottlieb, CEO of the consultancy Global Toy Experts. "They were backed up. You know that horrible experience where your airplane lands and there’s no open gate? That’s what happened to containers.’’

The result is that the supply chain breakdown is paralyzing many businesses.

Consider Elmer Schultz Services, a Philadelphia company that repairs and maintains kitchen equipment for restaurants and other clients. It is facing maddening delays in getting parts. It used to take seven to 10 days to get backordered parts. Now, it takes three or four weeks.

Glitches made things worse. The huge container ship Ever Given got stuck in the Suez canal for a week in March, cutting off shipping between Asia and Europe. The world’s fourth-busiest port — Yantian near the Chinese manufacturing center Shenzhen — was shut down for a month by a resurgence of COVID cases in late May.

Importers tried to calculate how much of the higher costs they could pass on to their customers. At Mindscope Products near Los Angeles, owner George Balanchi wants to avoid raising the prices he charges retailers for his company’s toys, including remote-controlled cars and the Jabberin’ Jack talking pumpkin.

Raising prices, he said, is easier online. He has upped the online price of Mindscope’s radio-control stunt car to $22.99 from $19.99 and plans another price hike to $24.99 next year.

Companies that resisted moving production overseas now enjoy an advantage. They don’t have to wait for their products to cross the ocean — or figure out whether they can pass along to customers the import taxes that hit them at the U.S. border.

"The guys who stuck through the tough time while their competitors had huge profit margins now look like they were smarter than everybody thought they were," Taylor said.

Make-A-Fort in Wichita, Kansas, is one of the fortunate — or visionary — ones. Co-founder Kent Johnson decided to make his company’s products — easy-to-assemble cardboard fortresses to play in — in the United States. He didn’t like the long lead times required for manufacturing overseas. He wanted more control over the quality of the product and wanted to be able visit the assembly lines regularly.

And he wanted to keep jobs in America.

"We started out doing it at a disadvantage," he said. "We just got a little bit lucky. We don’t have a lot of supply chains.’’

Freight charges are way up in the United States, he said, but that’s still nothing like the exploding cost of shipping containers.

Mursix Corp., which makes precision metal components for the auto and healthcare industries, has been pounded by higher steel costs and shipping bottlenecks.

"We used to be able to put something on a boat and get it in five to seven weeks," said Andy Dieringer, director of supply chain for the Yorktown, Indiana, company. Now, it takes nine to 11 weeks for shipments to arrive from China.

As a result, the company is looking for new suppliers in Mexico, said company co-owner Susan Murray Carlock, also vice president of business development. "I could see us being able to get there by next year" — maybe by the second quarter of 2022, she said.

But leaving China isn’t easy. Costs there remain low. And specialized suppliers cluster in Chinese manufacturing centers, making it easy for factories to get parts when they need them.

At All Things Equal, for example, Poses laments that "I have not yet had luck in finding a North American factory to produce my games at a competitive price. But, I’m still trying!″

"There are zillions of parts that are not made in the U.S. and probably won’t be made in the U.S. because they’re low-cost parts and because the industry is so vertically integrated," said Coates, the consultant, who is executive director of the Reshoring Institute, a nonprofit that helps companies manufacture in the United States.

It can also be risky. Companies might be forced to leave equipment behind, raising the possibility that the Chinese workers they’ve trained can put the abandoned molds and machine tools to work cranking out competing products.

"It’s complicated to extract yourself from China," Coates said, "and often very expensive.’’

But growing awareness of the risks of depending on supplies that must cross a vast ocean — especially at a time of U.S.-China tensions — is making U.S. companies look for alternatives closer to home. After all, major supply chain disruptions are becoming more common, the consulting firm McKinsey has found

’’Although COVID feels like such a black swan — and it is — disruptions in supply chains have been increasing in severity and frequency," said Katy George, a McKinsey partner.

Once rare, supply chain breakdowns that last a month or more are now occurring every 3.7 years, McKinsey found, noting in a report that "a single severe event that disrupts production for 100 days — something that happens every five to seven years on average — could erase almost a year’s earnings in some industries."