"She's dead," Balcomb said from the center's office on San Juan Island. "If you're looking for a short answer, it's that she's deceased. She's gone."

There are now only 74 orcas left in the pods that live in the Puget Sound.

On Thursday, the National Oceanic and Atmospheric Administration (NOAA) announced 4-year-old J50 hadn't been seen alongside her mother - known as J16 - or the rest of her resident pod for several days.

The last time J50 was spotted was Friday evening, Balcomb said. Her pod, the J Pod, has been traveling in and around the San Juans for over a week and she hasn't been spotted.

"This is unheard of for a baby whale," Balcomb said. "Everyone has given up hope."

Balcomb and his group have been following the southern residents for more than 40 years, and often make the official determination on the orcas.

Her body has not been found. But Balcomb said seeing the J Pod, and her mother J-16, without J50 more than three times is sufficient enough evidence to say she is dead.

"It's a tragedy," Balcomb said. "This little whale is showing us that the population is really at risk, not just one whale."

Earlier this month, J50 was missing from her pod for several days, but turned up alongside her mother.

The juvenile female orca -- also known as Scarlet -- was part of the southern resident "baby boom" that occurred when 11 calves were born between 2014-2016. After her death, only four calves from the baby boom are still alive.

The summer of 2018 makes the third summer in a row no orca calves have been born.

NOAA Fisheries and its partner Sealife Response, Rehab and Research on Monday released aerial photos of ailing the ailing orca to document a "dramatic decline in condition" between 2017 and 2018 and a "worrying continuation of this decline in the last month." 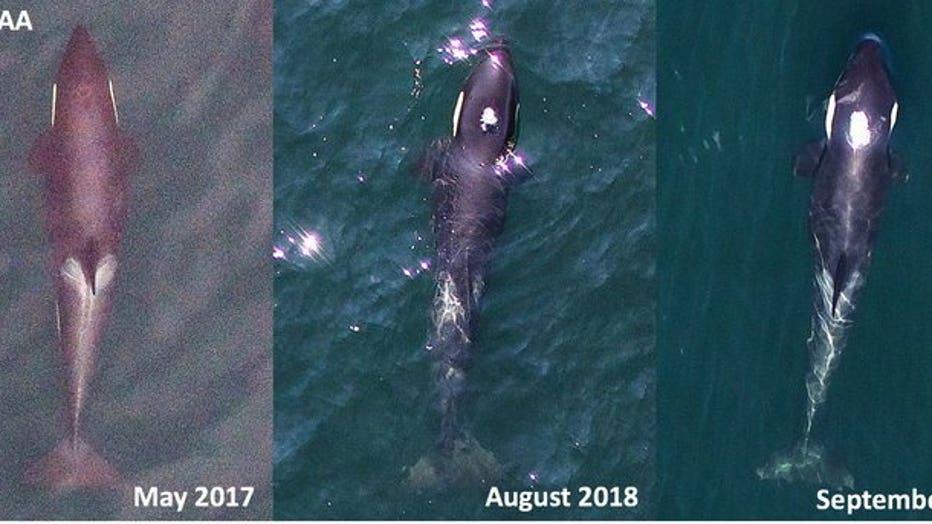 Aerial images of Southern Resident killer whale juvenile J50, taken on May 31st 2017 (left), August 1st 2018 (center) and September 3rd 2018 (right) for comparison. In the 2018 photos, she is in poor body condition revealing a very thin profile, and

Federal biologists said Wednesday they were preparing a plan to capture and treat the critically endangered orca if there was no other way to save her in the wild.

The brief life of J50

Always undersized, J50 was known as playful and independent, said Michael Weiss of the Center for Whale Research.

"She's a little rambunctious," said Taylor Shedd of Soundwatch. "She's always been a super playful calf. There's been multiple accounts of her breaching dozens of times over and over again."

She's a whale that researcher Ken Balcomb said has been easy to identify since day one because of her significant scarring.

"The baby had tooth rakes all over its dorsal side and a fin and I surmise that the baby required some sort of assistance in birth," Balcomb said. "Another whale bit a hold of it and pulled it from the womb."

His assessment is widely accepted. Many believe she was a breech baby and her mom, J16, needed help from other whales to give birth.

"Scarlet has had one of the toughest lives in such a short amount of time," Weiss said.

Earlier this year, NOAA and other scientists devised plans to try to help the ailing orca. Whale researchers medicated her, and released live salmon into the waters in front of the free-swimming J Pod. The orca was given a dose of antibiotics from a dart, and her breathing and attitudes were closely monitored.

"That's what this is really all about. The future of the population," the NOAA biologist said.