OLYMPIA, Wash. -- The Thurston County Sheriff's Office on Thursday assigned a major crimes detective to the investigation of a series of cat killings and mutilations.

This comes as two more cats were found mutilated Wednesday, but it's not yet clear if they were killed by animal or a person.

There had been nine cat mutilations in the county recently, with seven of them appearing to have been committed by the same killer, authorities said.

Then, two more cats were found mutilated on Wednesday. Thurston County Animal Services said they will know more -- and whether the deaths  fit the MO of the previous killings -- after the dead cats are examined by a forensic expert.

In many of the other killings, the cats were  sliced open with a knife or scapel and their spines were removed. The dead animals were then left in a public setting.

In the latest incidents, at about 8:30 a.m. Wednesday, deputies were sent to investigate a mutilated cat that was found inside of the Land Yacht Harbor Community in the 9100 block of Steilacoom Road SE., the sheriff's office said. The cat's owner was found and notified.

Then at about 6:05 p.m. Wednesday, deputies were sent to investigate a cat mutilation in the 500 block of School Street SE on the grounds of the Andrews United Methodist Church.  The owner of the cat was not found.

At that point, the Thurston County Sheriff's Office said it had assigned a major crimes detective to work with the various, previously assigned investigators from other agencies "to solve this disturbing serial crime spree."

"TCSO is extremely concerned that such a predator/s is lurking and committing such vile crimes within our community," the sheriff's office said in a news release. "TCSO will expend every available resource to solve these serial crimes and bring the perpetrator to justice." 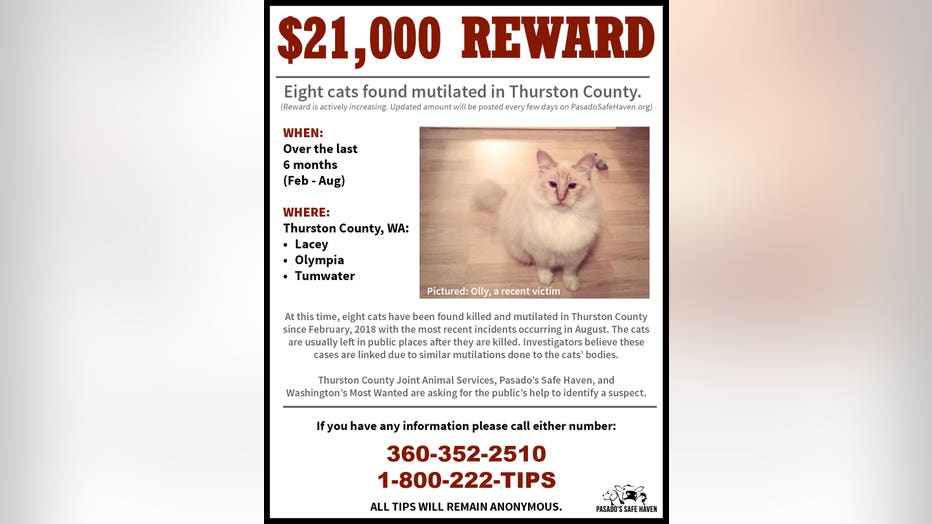