Sheep cool down inside Oregon apartment

Three sheep cooled off inside an air-conditioned apartment at an animal sanctuary in Lake Oswego, Oregon, on June 27, as the Pacific Northwest suffered days of record high temperatures.

LAKE OSWEGO, Ore. - One Oregon farmer decided to bring her sheep inside her air-conditioned apartment on June 27 to give them some reprieve from the historic heat wave that scorched the Pacific Northwest.

Kristen Tyler, founder of ReWild Farm Sanctuary in Lake Oswego, Oregon, recorded video of herself relaxing on her couch with her three sheep gathered together behind her.

The footage showed the sheep — one black and two white — standing atop hay as the sound of what is presumably the air conditioner whirs in the background.

"Since they have wool coats, there is no real way to cool them down," Tyler said. Temperatures reached 114 degrees that day, according to Tyler. 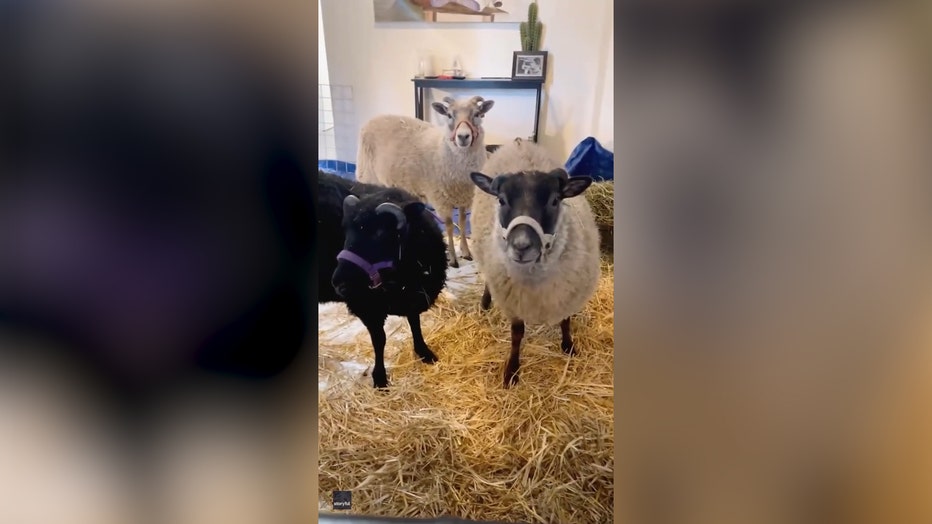 RELATED: 'Look out for the elderly': Loved ones speak out after Seattle woman dies from heat exposure

As forecasters warned of a record-breaking heat wave in the Pacific Northwest and western Canada last weekend, officials set up cooling centers, distributed water to the homeless and took other steps to mitigate the excessive heat. Still, hundreds of people are believed to have died from Friday to Tuesday.

The death toll in Oregon alone reached at least 70, with the number in Multnomah County, which encompasses Portland, at 50.

Weather experts say the number of heat waves are only likely to rise in the Pacific Northwest, a region normally known for cool, rainy weather, with a few hot, sunny days mixed in, and where many people don't have air conditioning.

This week's heat wave was caused by what meteorologists described as a dome of high pressure over the Northwest and worsened by human-caused climate change, which is making such extreme weather events more likely and more intense.

RELATED: What makes this heat wave so unusual?

Seattle, Portland and many other cities broke all-time heat records, with temperatures in some places reaching above 115 degrees Fahrenheit.