WETUMPKA, Ala. - Tornadoes damaged numerous homes, destroyed a fire station, briefly trapped people in a grocery store, and ripped the roof off an apartment complex in Mississippi, while two people died as a tree crunched their mobile home in Alabama, authorities said Wednesday.

The National Weather Service had warned that strong twisters capable of carving up communities over long distances were possible as the storm front moved eastward from Texas. They were fueled by record-high temperatures and threatened a stretch of the United States where more than 25 million people live.

A total of 73 tornado warnings and 120 severe thunderstorm warnings were issued from Tuesday afternoon to Wednesday morning, said Matthew Elliott, a meteorologist at the Storm Prediction Center in Norman, Oklahoma.

Significant tornado damage was evident in the Flatwood community north of Montgomery, Alabama, where two people were killed as a tree struck their home, said Christina Thornton, director of the Montgomery County Emergency Management Agency. 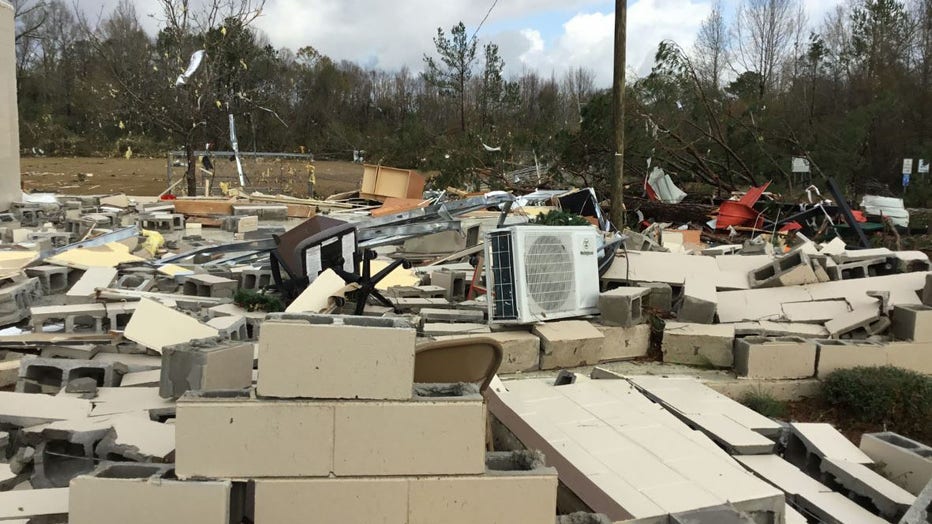 An EF-1 tornado with winds of 110 mph caused damage in and around the Flatwood Community north of Montgomery, Alabama. (Credit: National Weather Service)

Montgomery County Sherriff Derrick Cunningham said a community center in Flatwood, on the same road where the fatalities occurred, was destroyed, and that search and rescue teams were going door to door Wednesday to account for all residents.

The National Weather Service Office in Birmingham classified the Flatwood storm as an EF-2 tornado, with winds estimated at 115 mph (185 kph).

Isaiah Sankey, who represents Flatwood as vice chairman of the Montgomery County Commission, expressed grief for the lives lost. He vowed that installing storm shelters would be a priority.

"When we do rebuild, we will have storm shelters," Sankey said. 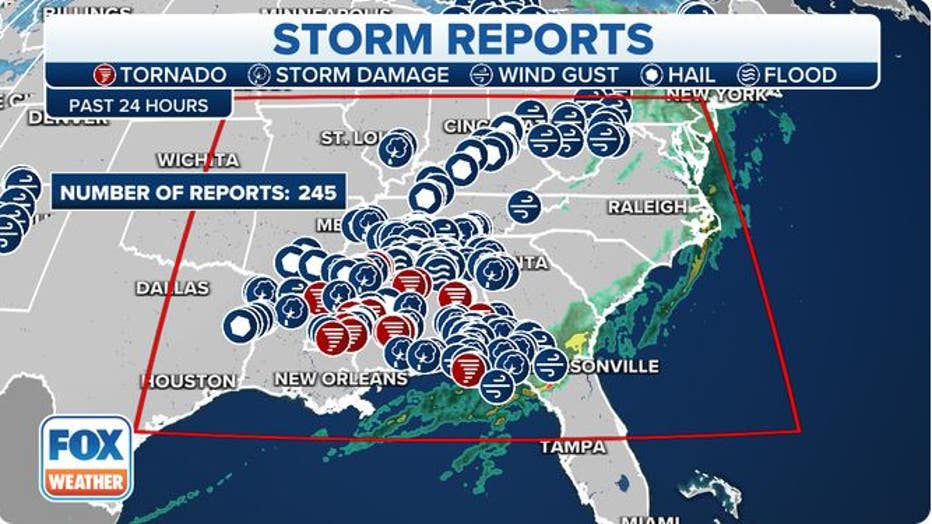 All reports of severe weather, including damaging winds, hail and tornadoes, in the 24 hours ending at 12 p.m. EST on Nov. 30 are plotted on the map. (FOX Weather)

Elsewhere, in the west Alabama town of Eutaw, large sections of the roof were missing from an apartment complex, displacing 15 families in the middle of the night, and power lines and trees were "all over the road," Eutaw Police Chief Tommy Johnson told WBRC-TV.

A suspected tornado also damaged numerous homes during the night in Hale County, Alabama, where the emergency director said more than a third of the people live in highly vulnerable mobile homes.

"I have seen some really nice mobile homes tied down, but they just don’t stand a chance against a tornado," Hale County Emergency Management Director Russell Weeden told WBRC. 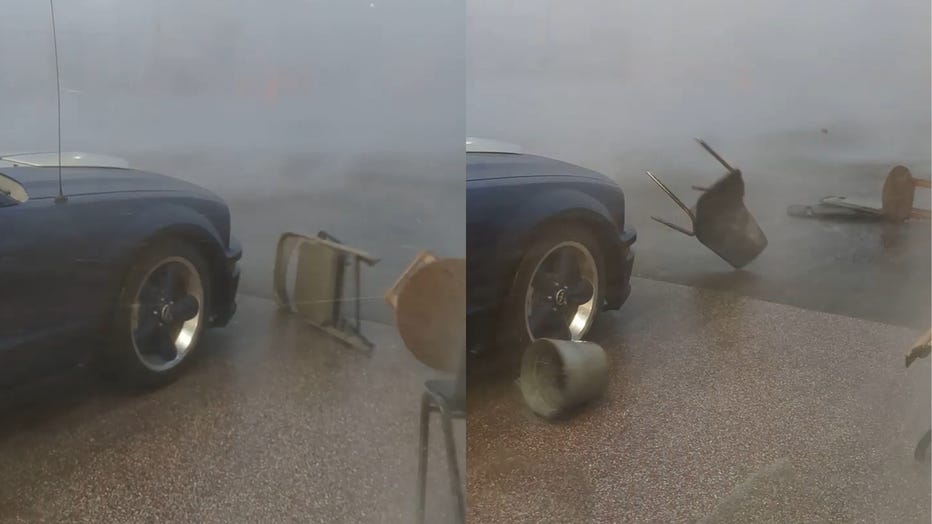 Screengrabs from a video show chairs being swept away by powerful winds in Muscle Shoals, Alabama, as the National Weather Service (NWS) issued a severe thunderstorm warning in the region on Nov. 29, 2022. Credit: Tanya Baker via Storyful

The weather service confirmed that tornadoes also hit the ground in Mississippi. Images of the damage from Caledonia showed a grocery store damaged, a fire station shredded and a house toppled, but Lowndes County Emergency Management Agency Director Cindy Lawrence told WTVA-TV that everyone escaped injury.

Hail stones crashed against the windows of City Hall in the small town of Tchula, Mississippi, where sirens blared as the mayor and others took cover. "It was hitting against the window, and you could tell that it was nice-sized balls of it," Mayor Ann Polk said.

High winds downed power lines, and flooding was a hazard as more than 5 inches (13 centimeters) of rain fell within hours in some places. More than 50,000 customers in Mississippi and Alabama were without electricity at one point Wednesday, according to poweroutage.us, which tracks utility outages.

Forecasters had been warning of the potential for a tornado outbreak for several days ahead of the storm. Elliott, who coordinates the warnings, said it took a lot of work to get the word out as people celebrated the holidays, and it seemed that people were taking the threat seriously. 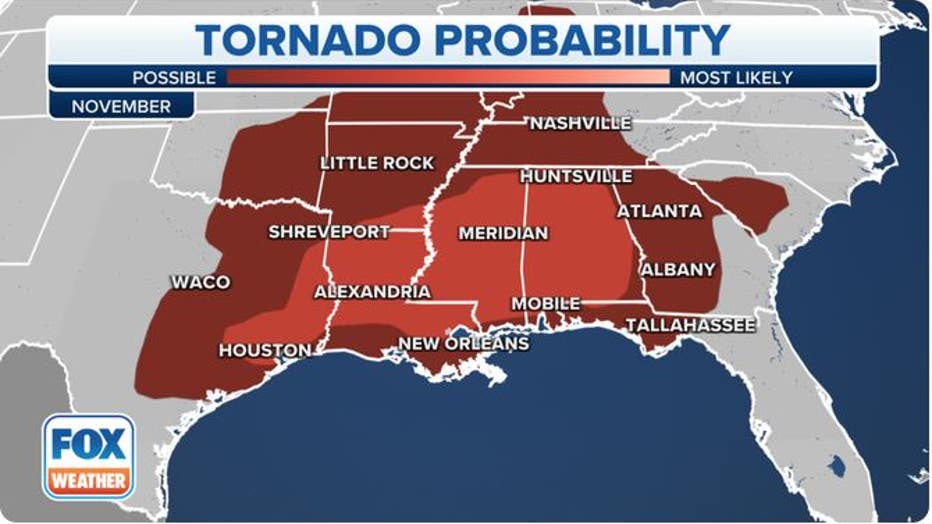 Forecasters had been warning of a possible tornado outbreak for days. Elliott, who coordinates the warnings, said it took a lot of work to get the word out, and people seemed to take the threat seriously. "It’s a very vulnerable part of the country for tornadoes -- especially tornadoes after dark," Elliott said.

Record high temperatures in Texas and Louisiana intensified the storm front before it moved into Mississippi and Alabama, forecasters said Wednesday.

Shreveport, Louisiana, heated up to 81 degrees (27.2 Celsius) on Tuesday; and Tyler, Texas, hit 82 degrees (27.8 Celsius), according to the National Weather Service in Shreveport. Both those marks broke the old record of 80, set in 1949, the weather service said.