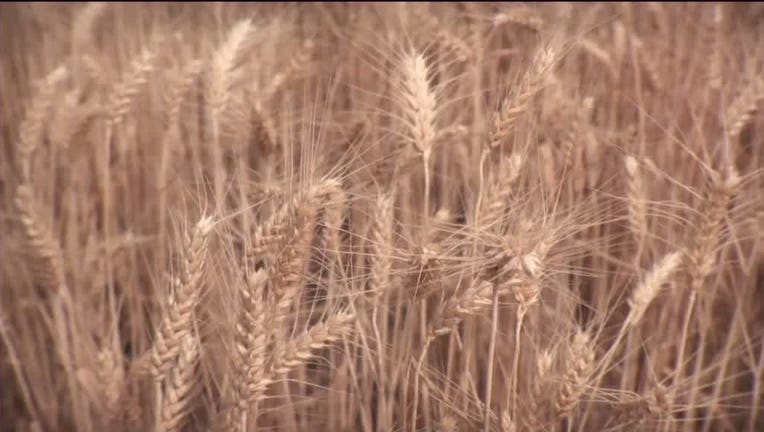 ROCKFORD, Wash. - The wheat harvest on Marci Green’s farm doesn’t usually begin until late August, but a severe drought stunted this year’s crop and her crews finished harvesting last week because she didn’t want what had grown so far to shrivel and die in the heat.

It’s the same story across the wheat country of eastern Washington state, a vast expanse of seemingly endless stretches of flatlands with rolling hills along its edges that produces the nation’s fourth largest wheat crop. It’s been devastated by a drought the National Weather Service has classified as "exceptional" and the worst since 1977.

"This is definitely the worst crop year we have had since we started farming 35 years ago," said Green, whose family is the sixth generation on the same farming land just south of the city of Spokane.

She estimated her farm’s wheat crop this year at half of normal, and of poor quality.

Green grows soft white winter wheat, a variety that is prized in Asian countries because it is excellent for making pastries, cakes, cookies and noodles.

At least Green will have some wheat to sell. Some Washington wheat farms produced almost none because of the drought.

"We’re seeing complete crop failure in some areas," said Michelle Hennings, executive director of the Washington Association of Wheat Growers in the small community of Ritzville, in the heart of the state’s wheat growing region.

Only about 10 percent of Washington’s wheat crop comes from farms with irrigation. The rest of the farms rely on rain, which has been rare in what is shaping up as one of the hottest summers in the state’s history.

The current estimate for the crop is 117 million bushels, down from last year’s 165 million, and there is a good chance the crop will be smaller than 117 million, said Glen Squires, director of the Washington Grain Commission, which represents farmers. A bushel is about 60 pounds (27 kilograms).

Oregon and Idaho also produce soft white winter wheat, and their crops have also been hurt by drought, Squires said.

The National Weather Service in Spokane said the state’s wheat region has received only about half its normal rain this year, and that the zone is in what the agency calls an "exceptional drought," the worst category.

"The lack of significant spring and early summer precipitation has led to record dryness across much of the Inland Northwest," the agency said. "The record breaking heat wave in late June made conditions even worse as multiple stations recorded their hottest temperature on record."

About 90% of Washington’s soft white winter wheat is exported from Portland, Oregon, to countries like the Philippines, South Korea, China and Japan, Squires said.

The wheat is fetching about $9 a bushel, which is higher than last year, but that is only for farmers who have wheat to sell, Squires said.

Washington has about 3,500 wheat farmers, who last year exported $663 million worth of wheat. With yields expected at 40% to 60% of normal, revenue will drop significantly, Squires said.

Many of the state’s farmers have crop insurance that covers up to 80% of losses, but some do not, Squires said.

Officials believe it’s inevitable that some wheat farmers will be bankrupted by the drought because "there is always a thinning" of them following severe droughts, Squires said.

Green’s farm has crop insurance which will help pay bills so the operation can survive another year, she said.

The state’s wheat farmers face another problem: Next year’s crop must be planted in September, but there is no moisture in the ground to help the seeds take hold.

"We need a lot of rain," Squires said. "But nothing says a change in the weather is coming."

But farmers using those varieties will still likely have to wait beyond the September planting season to sow their seeds to plant if the region doesn’t get a good soaking soon. And delaying planting might mean that the wheat grows too short in the fall to survive the winter.

During the winter and amid the region’s snowfall, the planted wheat stops growing and goes into a kind of hibernation. If the wheat isn’t tall or fully developed enough, it can result in a phenomenon called winter kill, Squires said.

He said there is only one solution: "We need moisture."