GRAVETTE, Ark. (KNWA) — The school photo of a service dog in Gravette, Arkansas is capturing hearts in the community.

“I love having her around,” he said. 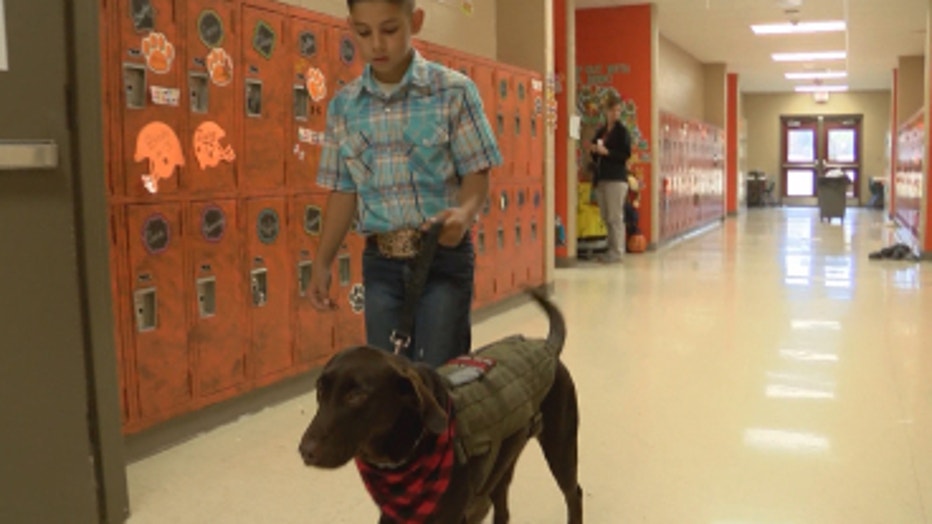 “We found out the medications weren’t working, and we kind of exhausted all our medications and was told it was probably going to get worse,” says Jessica Burchette, Treyton’s mother.

With the help of the Gravette community, over $15,000 was raised in one night to purchase the service dog.

“Every class donated baskets for a silent auction,” Burchette said.

Tosha is by Treyton’s side at all times, attending school with him on a daily basis.

“She’s the best student,” Treyton said.
During a seizure episode, Tosha can get the attention of an adult.
“If he is actively seizing, he crawls under his head to protect him, but she can sense when he’s not acting right,” Burchette said.

Tosha takes picture day just as serious as her job.

After Principal Dr. Mandy Barrett shared the photo on the school’s Facebook page, it was a hit.

“I think we spent the entire afternoon laughing about how poised she was,” she said.

When asked about having a service dog in an elementary school, she said there have been no issues.

“It’s new, it’s something different and truly an honor to be able to help a classmate,” Barrett said. “That’s what educators are here for. We’re here to make a life for these children, regardless of any medical diagnosis, of any need these kids have.”

But if you ask Treyton, he says, “I just like having her around because I feel like I’m normal…I’m a normal kid.”

This dog is much more than a best friend to him.

“The level of confidence that Treyton has gained since having Tosha is astronomical,” his mother says.

November is National Epilepsy Awareness Month. On November 14, Treyton’s birthday, students and staff at Upper Elementary will be wearing purple to spread awareness.