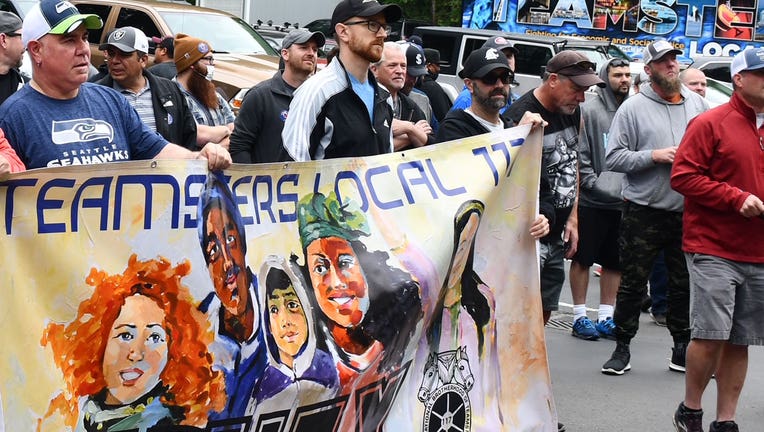 TUKWILA, Wash. - Customers of Republic Recycle and Yard Waste Services could see service disruptions as early as June following a unanimous vote by Teamster union members to authorize a strike.

The central issue in both the Republic and Waste Management negotiations has been the significant disparity in overall compensation between the garbage haulers and the recycle and yard waste drivers. According to Teamsters, Republic Services has rejected the drivers’ call for equity.

"Republic Services is putting dozens of communities across our region at risk of possible service disruptions to recycle and yard waste pick up," said John Scearcy, Secretary-Treasurer of Teamsters Local 117. "While Waste Management worked constructively with the union to rectify longstanding inequities impacting its employees, Republic Services continues to devalue its essential drivers who have been working on the frontlines throughout this pandemic."

The drivers are under contract through the end of the month, so no strike would take place before that.

"We’ll be negotiating with the company on Monday and Tuesday in an effort to reach an agreement. If we are unable to reach an agreement, a strike could be called any time after our members’ contract expires on May 31. We expect that all 130 of our members, who are yard waste and recycle drivers at Republic Services, would strike. The garbage haulers at Republic, who are represented by Teamsters Local 174, would have the right to honor and not work behind our picket lines. Service disruptions could impact dozens of communities across our region," A union representative told Q13 News.

Republic Services says it is still in negotiations for a contract for union employees in the Seattle area.

"Republic respects the rights of our employees to engage in the collective bargaining process, and we continue to negotiate in good faith to achieve fair and competitive labor contracts," Republic said in a statement to Q13 News.

According to the union, work in the solid waste industry ranks as the 5th most dangerous job in the country.

"Between 70-90 sanitation workers die on the job annually. Despite the dangers of the job, Republic Services has been slow to protect its workers during the pandemic. The International Brotherhood of Teamsters has received widespread reports of a lack of PPE that Republic workers desperately need, like puncture-proof gloves, face masks, protective eyewear, and face shields," the union said.

"We also have enhanced our protocols to help keep our facilities and equipment clean and safe, and to help ensure the well-being of employees," the company said.