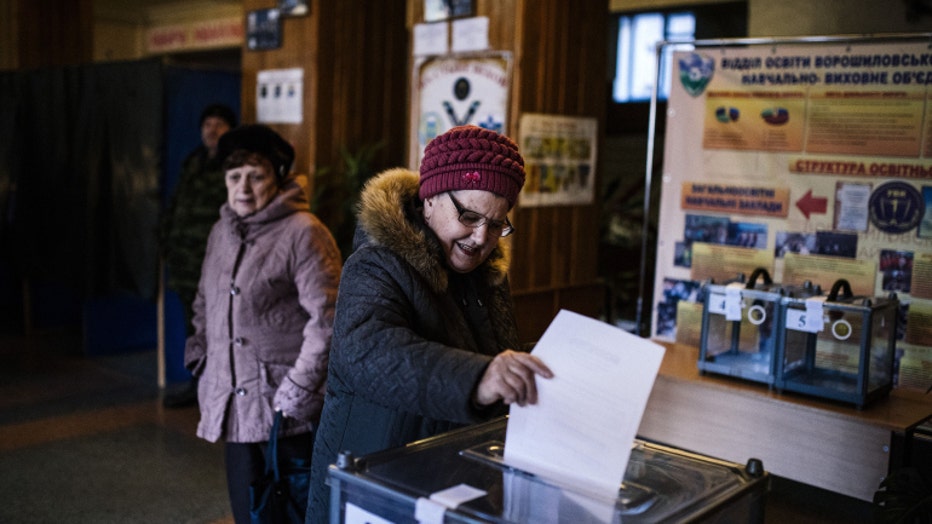 MOSCOW (CNN) -- Rebel-held areas of war-torn eastern Ukraine went ahead with elections Sunday amid encouragement from Moscow and fierce criticism from Kiev and Washington.

Russia's state-run news agency Itar-Tass is reporting officials have extended voting hours in some areas because of high voter turnout. "A decision was made that those polling stations that so far fail to cope with the flow of people will remain open until 10 p.m.," Central Election Commission head Sergei Kozyakov told Itar-Tass.

The voting has taken place against a violent backdrop. Despite a truce on paper between pro-Russian separatist groups and Ukrainian government forces, sporadic fighting on the ground continues.

Authorities in Kiev are basically ignoring the election and have said the rebel-organized voting is illegitimate.

In a statement Sunday, the Security Service of Ukraine said "it is a false election ... and a farce organized by criminals to collect data about people."

Before the vote, Ukrainian President Petro Poroshenko called the ballot "pseudo elections ... by terrorists and bandits."

Ukrainian authorities also said Sunday they are launching a criminal investigation into the separatist elections, calling it "a power grab," Agence France-Presse reported, citing the Security Service of Ukraine.

Some residents determined to vote

Some residents of the devastated region have said they were determined to participate in the vote, whether it's recognized by Kiev or not.

"Day and night we hear shots. Yes, they bomb us. Yes, we have bomb shelters and basements. But we don't want to go back there. That's why we are preparing for the elections and hope for something better," said Tatyana, a schoolteacher.

"Mostly people are afraid. The constant shooting scares people. But of course we should go and vote to reach something good in life," said Valentina.

The results are expected on Monday.

But there is no way to even verify the credibility of the balloting in the rebel-held areas. The voting has actually been under way for a week, by email and at mobile voting stations. No official observers have been used to monitor the voting.

Last weekend, the bulk of Ukraine under government control held its own parliamentary elections, which keeps pro-Western parties in power.

But citizens in Russian-annexed Crimea and the eastern areas controlled by separatists didn't participate in those elections because of the ongoing violence.

U.S. and Russia at loggerheads

Ukraine continues to be torn between West and East, and the United States has slammed the separatist vote.

"US will not recognize any election in separatist areas that doesn't follow Ukrainian law (and) is not held with consent of Ukrainian government," Samantha Power, U.S. ambassador to the United Nations, tweeted on Sunday.

She warned Russia "against using any such illegitimate vote as a pretext to insert additional troops and military equipment into Ukraine."

Russia is rejecting calls to distance itself from the rebel vote.

"We will of course recognize their results. And we expect that this election will be free and that no one will try to disrupt it from the outside," Russian Foreign Minister Sergei Lavrov said last week.


Victoria Butenko in Kiev contributed to this report