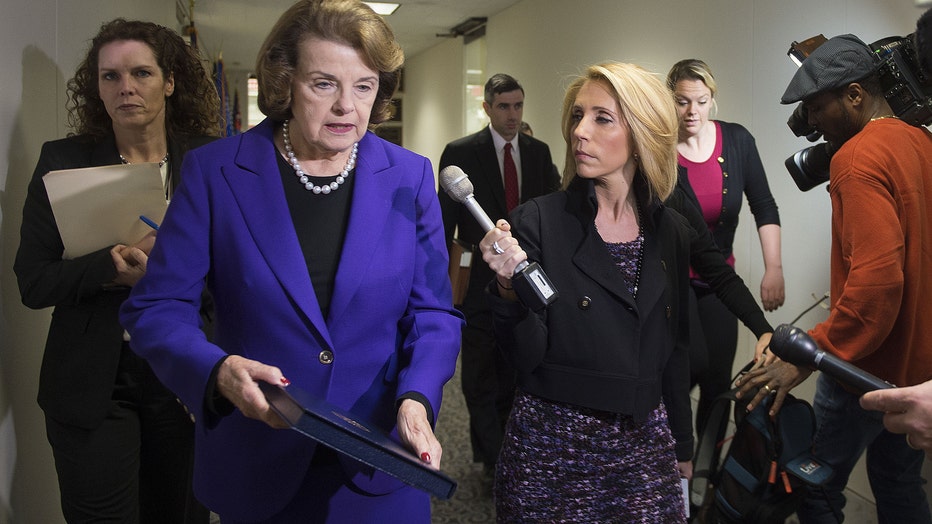 Senate Intelligence Chairwoman Dianne Feinstein (C), D-California, talks to reporters about the report on CIA interrogations of high-value terrorists a decade ago, while walking from her office on Capitol Hill in Washington, DC, December 9, 2014. Cre

WASHINGTON (CNN) -- The CIA's harsh interrogations of terrorist detainees during the Bush era didn't work, were more brutal than previously revealed and delivered no "ticking time bomb" information that prevented an attack, according to an explosive Senate report released Tuesday.


The majority report issued by the Senate Intelligence Committee is a damning condemnation of the tactics -- branded by critics as torture -- the George W. Bush administration deployed in the fear-laden days after the September 11, 2001 terrorist attacks. The techniques, according to the report, were "deeply flawed" and often resulted in "fabricated" information.

The report is reigniting the partisan divide over combating terrorism that dominated Washington a decade ago. Democrats argue the tactics conflict with American values while leading members of the Bush administration insist they were vital to preventing another attack.

The CIA immediately hit back at the report, saying in a statement that the program was "effective" and substantially helped its understanding of al Qaeda's tactical operations and goals. President Barack Obama said the report reinforced his view that the harsh interrogation methods "were not only inconsistent with our values as nation, they did not serve our broader counterterrorism efforts or our national security interests."

In its most graphic details, an executive summary of the report finds that conditions for detainees at top secret interrogation sites were much harsher than the CIA has previously admitted. It finds that high value detainees were subjected to methods like waterboarding and sleep deprivation "in near nonstop fashion for days or weeks at a time."

"In many cases, the most aggressive techniques were used immediately, in combination and non-stop," the report says. "Sleep deprivation involved keeping detainees awake for up to 180 hours, usually standing or in painful stress positions, at times with their hands shackled above their heads."

In one facility, a detainee was said to have died of hypothermia after being held "partially nude" and chained to a concrete floor, while at other times, naked prisoners were hooded and dragged up and down corridors while being slapped and punched.

Multiple CIA detainees subjected to the techniques suffered from hallucinations, paranoia, insomnia and tried to mutilate themselves, the report says.

On one occasion, high-value al Qaeda suspect Abu Zubaydah became completely unresponsive after a period of intense waterboarding. He had "bubbles rising through his open full mouth," the report says.

Meanwhile, the confessed mastermind of the September 11 attacks, Khalid Sheikh Mohammad, was subjected to a "series of near drownings."

Thousands of marines at U.S. diplomatic posts and military bases around the world are on alert amid fears the graphic details of how detainees were treated could spark a violent backlash.

Defense Secretary Chuck Hagel told CNN's Jim Scuitto in an interview on Tuesday that the administration had worked closely with the military to take contingencies ahead of the report's release.

"We want to be prepared and we are," said Hagel.

The full report is more than 6,000 pages long. But after a prolonged tussle between the CIA and the committee over how much of the material should be classified, the document being released Tuesday is 480 pages long.

There will be a separate rebuttal by Republicans on the committee.

Senior members of the Bush administration have also voiced disquiet that the report is being released and defended their actions, those of administration lawyers and CIA agents charged with the interrogations.

Former president George W. Bush told CNN's Candy Crowley last week that the United States was "fortunate to have men and women who work hard at the CIA serving on our behalf. These are patriots."

Former Vice President Dick Cheney told the New York Times that claims that the CIA was out of bounds or that the interrogation program was a rogue operations were "a bunch of hooey."

"The program was authorized. The agency did not want to proceed without authorization, and it was also reviewed legally by the Justice Department before they undertook the program," Cheney said.

Countries that cooperated with the CIA, hosting black site prisons and assisting in transferring detainees are identified only obliquely and not by name.

CIA employees, referred to by pseudonyms in the report, aren't being identified. However, the agency pushed for the pseudonyms to be redacted because other information in the report could be used to determine who the employees are.

But it is also trying to walk a fine line, by sticking to claims that valuable intelligence on al Qaeda and in the hunt for bin Laden emerged from the harsh interrogations of detainees.

For some Republicans and CIA supporters, there's still a dispute about whether techniques such as waterboarding constitute torture.

The Justice Department twice has investigated the conduct of CIA employees involved in the program and decided not to bring charges.

Shortly after taking office in 2009, President Barack Obama banned the use of enhanced interrogation techniques like waterboarding, saying they were of questionable use and did not sit well with US values.

In August, Obama admitted "we tortured some folks" but said he could understand the reasons the CIA, under fierce pressure to prevent a repeat of the September 11 attacks, resorted to such controversial techniques.

The White House says that despite warnings the report's release could spark protests, the president backs its publication.

"The President believes that, on principle, it's important to release that report so that people around the world and people where at home understand exactly what transpired," White House spokesman Josh Earnest said on Monday.

"We've declassified as much of that report as we can. We want to be sure that we can release that report and be transparent about it, and be clear what American values are."