Budget deficit to hit record $3.3T due to virus, recession

The federal budget deficit is projected to hit a record $3.3 trillion as huge government expenditures to fight the coronavirus and to prop up the economy have added more than $2 trillion to the federal ledger.

WASHINGTON - Senate Democrats scuttled a scaled-back GOP coronavirus rescue package on Thursday, saying the measure shortchanged too many pressing needs as the pandemic continues its assault on the country.

The mostly party-line vote capped weeks of wrangling over a fifth relief bill that all sides say they want but are unable to deliver. The bipartisan spirit that powered earlier aid measures has given way to election-season political combat and name-calling. The 52-47 vote fell well short of what was needed to overcome a filibuster and seems likely to end hopes for coronavirus relief before the November election.

The $500 billion measure is roughly half the size of legislation promoted by GOP leaders this summer, but was too big for most conservatives. Instead, the GOP bill was stripped back to focus on school aid, jobless benefits and help for small businesses. That maximized Republican support even as it alienated Democrats, who say such a piecemeal approach would leave out far too many vulnerable people.

The result was a predictable impasse and partisan tit for tat as the congressional session limps to its preelection close. It's becoming plain that all Congress will do before the Nov. 3 election is pass legislation to avert a government shutdown. The outcome of the election promises to have an outsize impact on what might be possible in a postelection lame-duck session, with Democrats sure to press for a better deal if Democrat Joe Biden unseats President Donald Trump. 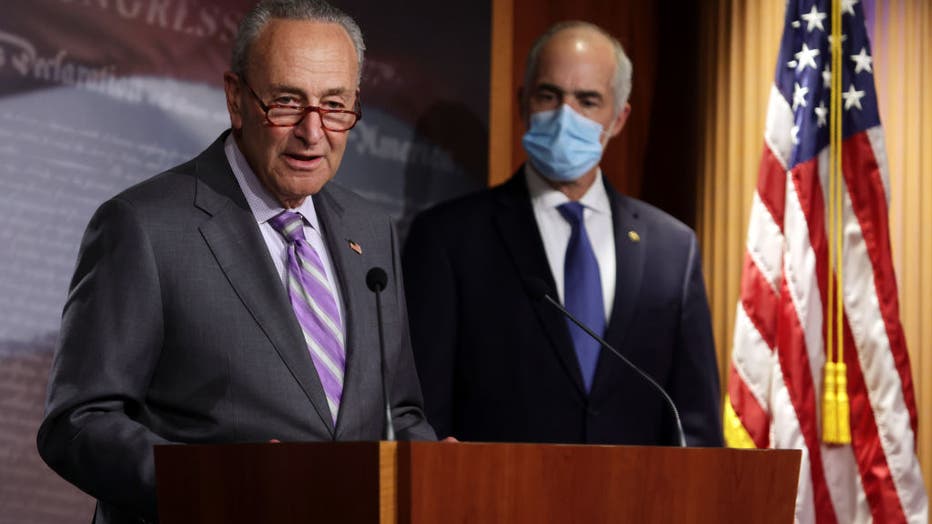 “But (Thursday's) bill is not going to happen because it is so emaciated, so filled with poison pills, so partisanly designed,” Schumer said.

McConnell crafted the measure to permit his GOP colleagues to go on record in favor of popular provisions such as another round of “paycheck protection” help for smaller businesses, help for schools to reopen and supplemental jobless benefits. He again blasted Democrats on Thursday, saying they are still pushing a liberal wish list and are willing to scuttle provisions with widespread backing to deny Trump a victory.

“Today every senator will either say they want to send families the relief we can agree to or they can send families nothing," McConnell said.

There’s no indication yet that bipartisan talks that crumbled last month will restart. Top lawmakers and aides offered glum assessments both publicly and privately.

The stalemate is politically risky for all sides heading into the fall election, which will decide not only the presidency, but also control of Congress.

While nationwide coronavirus cases appear to be at a plateau, there is still widespread economic hardship and social unease in homes, schools and businesses affected by closures. Experts warn that infections are expected to spike again if Americans fail to abide by public health guidelines for mask-wearing and social distancing, especially amid colder weather and flu season.

McConnell said Democrats have not backed off what he said were unreasonable demands. He accused Democrats of acting as though it is to their political advantage to deny Republicans and Trump a victory on the virus so close to Election Day.

Schumer said Republicans are “so out of touch." He predicted Republicans and the White House “may yet be forced to come back to the table because COVID is the major issue that’s facing the American people.”

The stalemate has left McConnell and Republicans to say that they support a short-term spending measure, called a continuing resolution, or CR, that would avert a government shutdown at month’s end and set up a postelection lame-duck session to deal with any unfinished Capitol Hill legislation, which could include coronavirus relief.

The Republican measure in Thursday's test vote would:

—enact a shield against lawsuits for businesses and others moving ahead to reopen.

—write off $10 billion in earlier debt at the U.S. Postal Service.

— set aside $31 billion for a coronavirus vaccine, $16 billion for virus testing and $15 billion to help child care providers reopen.

— devote $258 billion for a second round of paycheck protection subsidies.

It did not contain a new round of $1,200 direct payments going out under Trump’s name, and the new $300 weekly jobless benefit would expire just after Christmas, on Dec. 27. The GOP bill also lacked money for election security that lawmakers from both parties have supported.

Democrats say the GOP bill is far too small and leaves out important priorities, including hundreds of billions of dollars for state and local governments, more generous jobless benefits, and help for renters and homeowners, along with other provisions in the House Democrats’ $3.5 trillion relief bill that passed in May.

RELATED: CDC directs halt to renter evictions through end of 2020 amid coronavirus pandemic