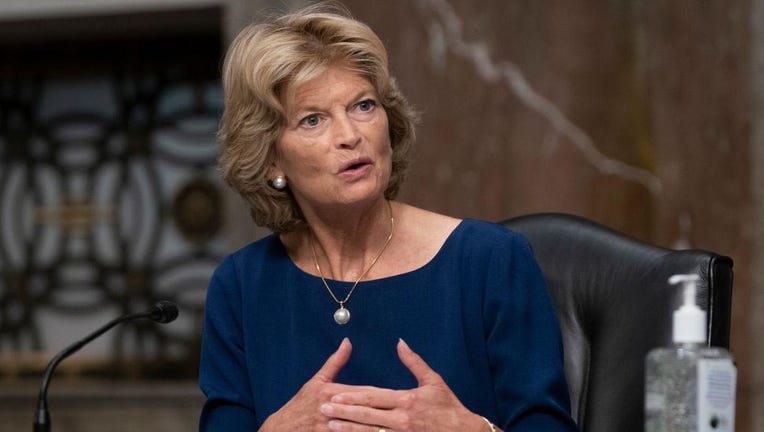 U.S. Sen. Lisa Murkowski, R-AK, asks a question at a hearing of the Senate Health, Education, Labor and Pensions Committee on Sept. 23, 2020 in Washington, D.C. (Photo by Alex Edelman-Pool/Getty Images)

WASHINGTON - Sen. Lisa Murkowski of Alaska became the first Republican member of the Senate to call for President Donald Trump’s resignation after a violent mob of his supporters stormed the Capitol, leading five people dead and dozens of officers tasked with defending the building injured.

"I want him out. He has caused enough damage," the Alaska Republican told the Anchorage Daily News.

Murkowski also questioned whether she wanted to remain a Republican. She told the newspaper that many people felt she became an independent when she lost her Republican primary in 2010 but won the general election by write-in.

She has been in the Senate since 2002, replacing her father, Frank Murkowski, who took office in 1981.

"If the Republican Party has become nothing more than the party of Trump, I sincerely question whether this is the party for me," she said.

Murkowski added that Trump "needs to get out. He needs to do the good thing, but I don’t think he’s capable of doing a good thing."

Murkowski's comments came two days after rioters breached the Capitol, upending a joint session of Congress to tally the Electoral College votes and certify President-elect Joe Biden's win. A San Diego woman and a U.S. Capitol Police officer were among those killed in the attack.

Trump is to leave office Jan. 20 when Biden is sworn in, and he has said he will not attend the inauguration — making him the first incumbent president to skip his successor's swearing-in since 1869.

In addition for calls of the president’s resignation, a number of top Democrats on Friday laid plans for a swift second impeachment of Trump — beginning Monday — with just 12 days left of his presidency.

"We must take action," House Speaker Nancy Pelosi declared on a private conference call with Democrats, according to the Associated Press.

Pelosi expressed concerns of an "unhinged" president and said she spoke to the chairman of the Joint Chiefs of Staff about preventing Trump from ordering a nuclear strike in his final days.

If Trump were to be impeached by the House and convicted by the Senate, he might also be prevented from running again for the presidency in 2024 or ever holding public office again. He would be the only president twice impeached. A person granted anonymity to discuss the private call said Pelosi also discussed other ways Trump might be forced to resign.

Biden, meanwhile, said he is focused on his job as he prepares to take office. Asked about impeachment, he said, "That’s a decision for Congress to make."

Biden says issue of Trump impeachment up to Congress

President-elect Joe Biden said the issue of a possible second impeachment of President Donald Trump is a decision left for Congress and declined to weigh in.

Conviction in the Republican Senate at this late date would seem unlikely, though in a sign of Trump's shattering of the party, many Republicans were silent on the issue.

One Trump ally, Republican Minority Leader Rep. Kevin McCarthy of California, said "impeaching the President with just 12 days left in his term will only divide our country more."

McCarthy said he has reached out to Biden and plans to speak with the Democratic president-elect about working together to "lower the temperature."