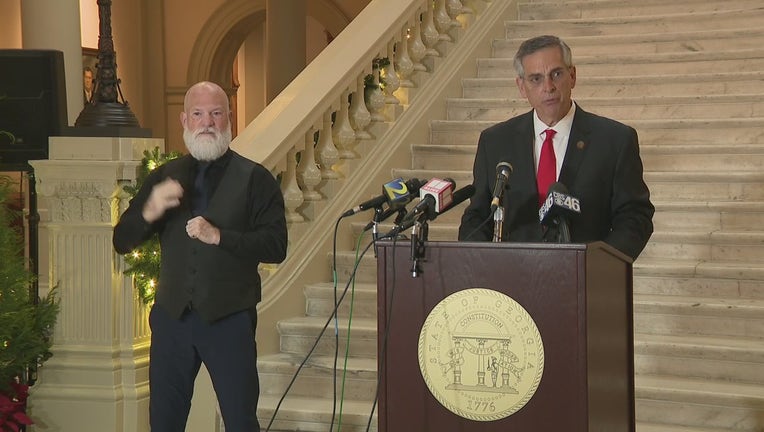 ATLANTA - The Georgia Secretary of State’s Office is investigating a Florida attorney for encouraging two million others to move to Georgia to be able to vote in the upcoming Senate runoff.

Bill Price, the attorney in question, was recorded making the remarked to a Bay County Florida Republican Party meeting on Nov. 7. He said he was moving to Georgia and moving in with his brother in order to register to vote in the runoff, the Secretary of State's Office revealed. He then encouraged others to be “his roommate in Georgia” and register.

“If we lose the Senate on Jan. 5 in Georgia, we will become Venezuela,” he told the crowd inside the county headquarters in a video posted to their Facebook page, “and I will invite each and every one of you to be my roommate in Georgia.”

In a phone conversation, Price admitted to FOX News that he had filled out the registration online but said he was doing it to expose Democrats who were trying to vote illegally.

“I wanted to see how easy it was to do it,” he said. “I’m not actually moving to Georgia. I was joking.”

Still, in the video, Price is heard encouraging attendees to use the address of his brother who lives in Georgia in order to register to vote there.

“We have to start fighting back and we have to do whatever it takes,” he says in the footage. “And if that means changing your address for the next two months, so be it.”

“We’ll make room for you at the dinner table,” he said before stating his brother’s address several times.

“An attorney should know better,” said Deidre Holden, chair of the Board of Elections in Paulding County, where Price attempted to register to vote. “This is fraud,” she said, “especially after his speech on Facebook.”

“Make no mistake, individuals who attempt to undermine the integrity of Georgia’s elections will be investigated and prosecuted to the fullest extent of the law,” said Secretary Raffensperger. “Those who move to Georgia just to vote in the Senate runoffs with no intention of staying are committing a felony that is punishable with jail time and hefty fines. They will be found, they will be investigated, and they will be punished.”

Price did not answer messages left by FOX News with his office in Panama City, Fla.

Raffensperger’s has since launched a full investigation of Price’s actions after he attempted to register to vote. His status is still pending.

State elections officials have issued warnings previously about out-of-state residents attempting to move to the state to participate in the runoff election.

The Secretary of State’s Office earlier this week announced it was also launching an investigation into four voter registration organizations that reportedly sent absentee ballot applications to people at "addresses where they have not lived since 1994."

FOX News contributed to this report