Photojournalist Scott Hopson brings us the sights and sounds as the Seawolves and their jubilant fans celebrate back to back MLR Championship wins.

When you think of Seattle sports teams, rugby likely isn't the first thing that comes to mind.  But maybe it should be.  The Seattle Seawolves just won back-to-back Major League Rugby championships in 2018 and 2019. 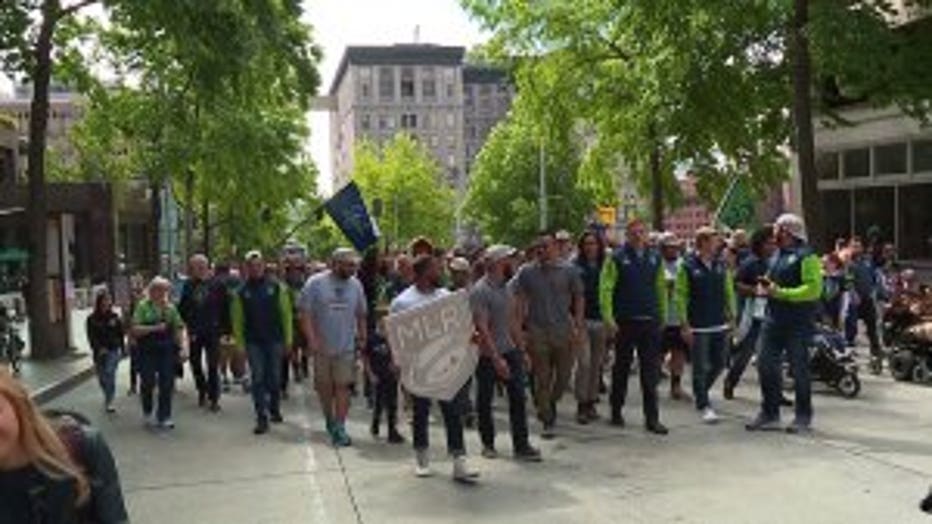 Seattle Seawolves players and fans prepare to march from City Hall to Pike Place in celebration of the team's 2019 MLR Championship win.

"We knew it was coming." said Wendy Ogden, who made the trip from Bremerton to show her support. "We just knew it. We had all the faith in the world in them."

Fans lined up outside Seattle City Hall early Friday to celebrate the team's championship win with a flag raising and then a march to Pike Place.

"This is the largest scrum I've ever witnessed." Alex Fletcher joked.  She would know.  Fletcher is president of the UW Women's Rugby Club. She and a teammate came to congratulate the pros on their new plate.  They stood shoulder to shoulder with fellow fans of all ages - from grandparents to kids in strollers.  The Seawolves say support like that is what helps drive them to victories like the literal last-minute win in this year's championship.

"There were certain points in this year where the fans pushed us - and they really did push us over the line that last play as well." scrum half Phil Mack said.  And one sentiment repeated over and over again Friday morning: this isn't just the team's championship shield - it belongs to the whole city.

"We don't do this for ourselves." said Air Force Captain Eric Duechle. "We do it for our family, and for the city.  And we're going to go for three. Going for the three-peat!"