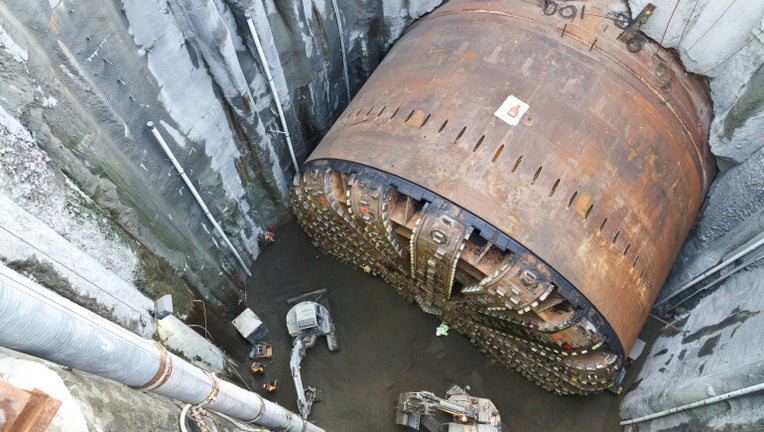 From WSDOT: In this Dec. 14, 2015 photo, crews working for Seattle Tunnel Partners fill in the pit used to access and repair Bertha, the SR 99 tunneling machine. Sand is delivered into the pit through the flexible pipe on the left, and then is spread

SEATTLE (AP) — The tunnel-boring machine called Bertha came to life after almost two years of repair work and is set to restart its journey under Seattle.

Building a tunnel was the preferred option to replace the Alaskan Way Viaduct after it was damaged in a 2001 earthquake, but it was delayed in December 2013 after the machine overheated. The front of the machine had to be pulled out of an access pit to be fixed and has since been reattached.

The contractor, Seattle Tunnel Partners, announced Tuesday Bertha successfully moved forward and installed a tunnel ring at the bottom of the 120-foot-deep pit.

Project manager Chris Dixon says the next several hundred feet of excavation will give them the information they need to make final adjustments before tunneling under the viaduct and downtown Seattle.

Dixon says after the holidays, the contractor plans to mine out of the access pit toward a maintenance stop 450-feet to the north. It's expected to reach the viaduct in March.