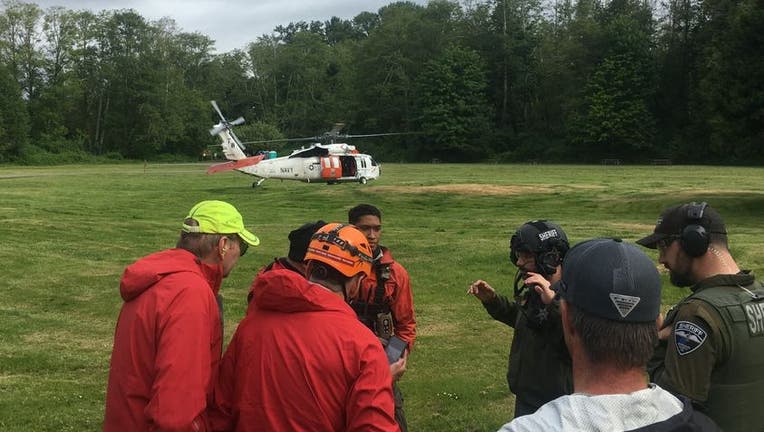 BRINNON, Wash. - A 31-year-old Seattle woman died ﻿Sunday after falling down a 40-foot crevasse on the Brothers Mountain.

Jefferson County search and rescue crews responded about 1 p.m. to reports of two hikers who had fallen on the mountain in Olympic National Forest. The people who reported the injured hikers stayed with them until rescue crews arrived.

Crews were able to get a helicopter to the scene after multiple attempts and airlift one of the hikers to the hospital. The other, a 31-year-old Seattle woman, was dead when crews reached her.

According to the Peninsula Daily News, the man she was hiking with held onto her as long as he could to try and stop her from falling deeper into the crevasse. He lost his grip after about 15 minutes.

The newspaper reports that both hikers lost their footing at about 5,700 feet. The man who was airlifted to Harborview Medical Center in Seattle has since been released from the hospital.

In Skagit County, search and rescue crews are on Day 4 of their search for 66-year-old Tom Simonseth, who never returned from a hike on the Hidden Lake Trails.

The road leading to the Hidden Lake Trailhead is closed to all unauthorized vehicles while the search continues. The trail is also closed until further notice.

Crews ask that the public refrain from assisting in search efforts because trail conditions are dangerous.

Search and rescue crews with the Skagit County Sheriff’s Office began their official search Sunday. Crews from Snohomish County joined the efforts, as well as units from the U.S. Border Patrol and U.S. Navy.