The Chief of Trauma at Harborview Medical Center says now is the time to double down on our efforts and to think about how we can address the problem of gun violence.

SEATTLE  -- There are nationwide calls to address mass shootings, but health officials are quick to point out, firearm violence happens every day.  In 2017, the CDC reports, for the first time, the number of deaths from firearm injuries exceeded that from motor vehicle crashes.

The Chief of Trauma at Harborview Medical Center says now is the time to double down on our efforts and to think about how we can address the problem of gun violence, not just for mass shootings, but for the everyday events we see in trauma centers.

“I think it’s important to recognize that mass shootings represent one percent of the firearms problem in this country. And it’s a horrible thing that we have to solve, but we have to tackle the big picture, the 40,000 people that die every year in the country from firearm violence. We can’t forget them,” says Dr. Eileen Bulger.

Dr. Bulger goes on to say that the American College of Surgeons worked with groups to develop a list of recommendations that can make an impact on firearm violence.  She says taking a public health approach to the issue, in the way car crashes and smoking were addressed, could be a solution.

“If you think about a problem like that from a comprehensive public health approach, then you can see if you study the problem, if you invest in research to study the problem and you develop interventions based on that research, then you can have a dramatic effect," Dr. Bulger said. "We have cut the deaths and disabilities from motor vehicle crashes dramatically since the 1960s. We can do the same thing with this problem if we focus on it in that way." 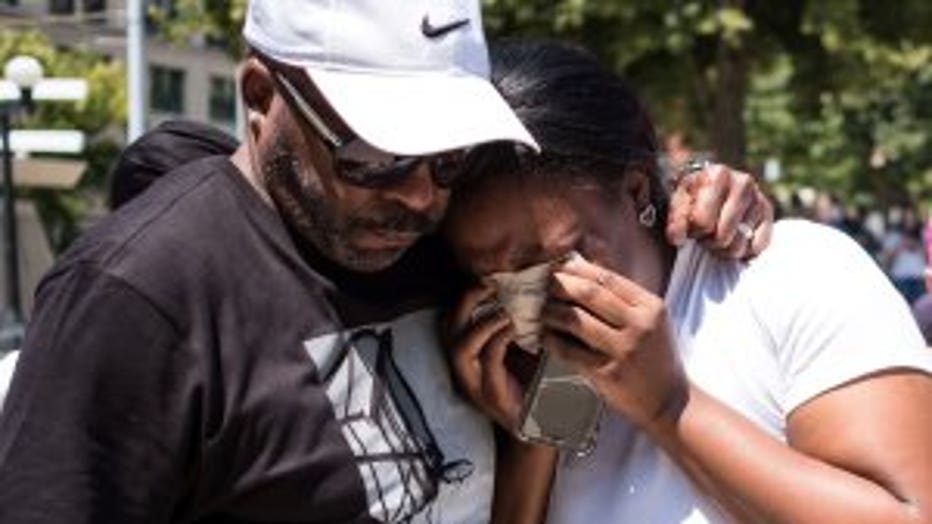 A couple mourn at a vigil held in honour of those who lost their lives during a shooting in Dayton, Ohio on August 04, 2019. - Nine people were killed in a mass shooting early Sunday in Dayton, Ohio, police said, adding that the assailant was shot de

Just three weeks ago, King County Health hosted a summit and the goal was to bring people together to have a conversation. Advocates, policymakers and just regular people from the community gathered to put a spotlight on regional efforts to prevent gun violence through a public health lens.  They talked about the importance of having better data to make better decisions and to identify risk. We also heard from the mother of a 16-year-old girl named Carmen who was killed in the Parkland shooting last year.

“I really feel like my daughter’s death could have been prevented," said April Schentrup. "There were so many things that should have happened, but didn’t. There’s a lot of warning signs for people who are violent, but if they have a firearm they are more likely to cause harm to someone else or themselves."

Dr. Bulger says there is a lot that can be done if we take an approach that’s not political and not challenging the second amendment, but rather identifying the root causes of violence and managing them.

“I think that if we take a public health approach, if we think of it the way we thought about motor vehicle crashes, or about how we’ve dealt with smoking or other public health problems, then I think we have a real opportunity to do something. I think throwing up our hands and saying 'Oh we’re never going to solve this because it’s just politics' is a mistake,” says Bulger.

She also says getting some training from programs like 'Stop the Bleed' is important for each of us, should we ever find ourselves in a situation like that, it could potentially help save lives.