SEATTLE -- For the first time in 110 years, The Seattle Times on Tuesday is publishing an editorial on the front page. It calls on Gov. Jay Inslee to veto the records law passed by the Legislature last Friday.

The Times said seven other newspapers across Washington state are running front-page editorials on Tuesday.

The Seattle Times editorial is headlined, "Gov. Inslee, stand up for the people and veto bill on legislative secrecy."

The editorial begins, "Washington state lawmakers have committed an egregious breach of the public trust. It now falls to Gov. Jay Inslee to correct the wrong born from their hubris. The governor must veto Senate Bill 6617, a brazen attempt by lawmakers to exempt themselves from the state's Public Records Act. These elected officials are evading the ruling of a judge and contradicting Attorney General Bob Ferguson, both of whom said legislators are subject to the law."

The newspaper calls on residents to email or phone the governor's office to urge him the veto the bill. 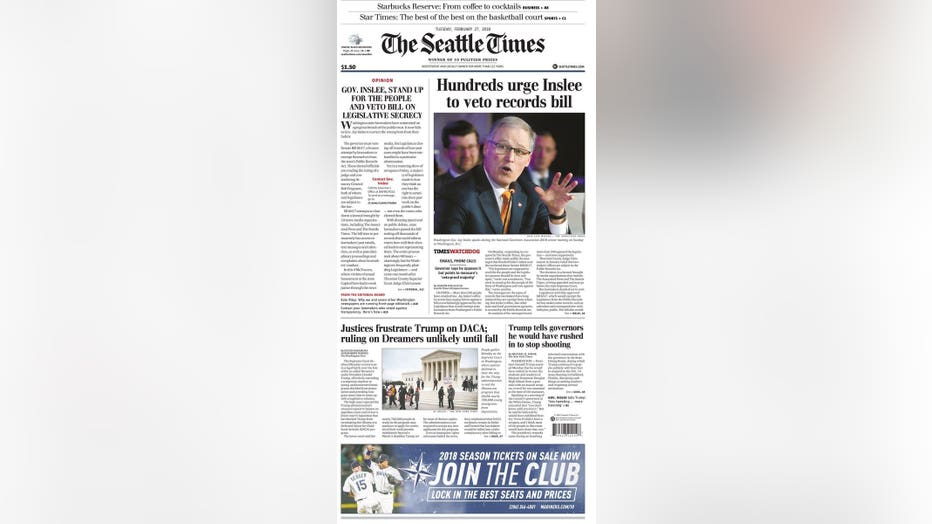 Last Friday, Washington state lawmakers overwhelmingly approved legislation that will make some of their records public in the future, but will circumvent a recent court ruling that found they were already fully subject to the state's public disclosure laws.

The measure retroactively removes the legislative branch from the state's voter-approved Public Records Act so that lawmakers are able to attempt to shield records sought by a coalition of media groups, led by The Associated Press, who prevailed in court last month. The Seattle Times was part of that lawsuit.

The bill passed the Senate on a 41-7 vote Friday, and then was quickly approved by the House 83-14. The bill heads to Inslee with a veto-proof margin.

The quick action comes just two days after the bill was introduced. Only four lawmakers spoke during the brief debates in both chambers, all saying that the measure is intended to increase transparency.

The bill, co-sponsored by Democratic Senate Majority Leader Sharon Nelson and Republican Senate Minority Leader Mark Schoesler, allows the release of some lawmaker correspondence, including those with lobbyists; information from lawmaker calendars; and final disciplinary reports beginning on July 1.

However, because of the retroactivity language, it would prohibit the release of the records being sought by the coalition of news organizations that sued last September.

The Legislature is appealing the Jan. 19 ruling of Thurston County Superior Court Judge Chris Lanese, who ruled state representatives and senators and their offices are fully subject to the same broad public disclosure requirements that cover other local and state elected officials and employees at state agencies.

"Just as important as transparency is the ability of lawmakers to effectively work on behalf of those who sent us here," he said.

Republican Sen. Mark Miloscia, who voted no, said that the rushed process and ultimate outcome "feeds into the cynicism that we see, that we can't trust politicians."

"The Legislature should be leading on transparency, not giving the impression that it's hiding stuff," he said.

Under the measure, exemptions from disclosure would include records of policy development, as well as any records that would "violate an individual's right to privacy." While final disciplinary reports against lawmakers would be subject to disclosure, emails or other documentation of allegations of things like sexual harassment or misconduct that doesn't result in an official report — which were among the records the news coalition was seeking — would not.

Any person wanting to challenge a records denial would have to seek review by the Senate Facilities and Operations Committee or the House Executive Rules Committee, whose rulings would be final. Unlike denials under the state's Public Records Act, no review by the courts would be allowed.

An attorney for the media coalition said the group's litigation would continue, and that the effort to make the law retroactive would be part of the ongoing case.

It's unclear whether Inslee — who has said he believes lawmakers should be subject to the same transparency laws other government officials are — would veto the bill, especially since there was enough legislative support to override the veto.