SEATTLE - With smoke from wildfires blanketing the Puget Sound, one local researcher says Seattle and Tacoma recorded the worst 24 hours of air quality on record Tuesday.

University of Washington professor of atmospheric sciences Cliff Mass blamed the unhealthy stretch on a “perfect storm” of meteorological conditions.

“We had easterly flow, northeasterly flow bringing smoke from British Columbia and from Eastern Washington down into Puget Sound,” he said. “And we had this strong inversion over us that capped it in and so we had these amazingly high pollution values.” 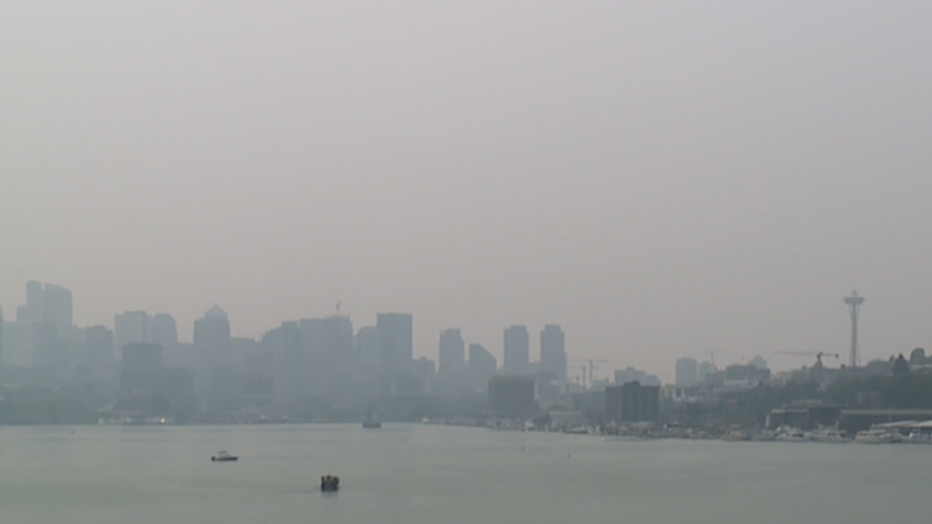 Mass said we normally see the highest concentrations of particulates in the atmosphere in the winter, so this is unusual.

“An inversion is when temperature increases with height and that is like a lid on the atmosphere,” he said. “It’s very stable, so it keeps the pollution from the wildfires down in the low levels.”

Mass said the record is based on pollution measurements from the Puget Sound Clean Air Agency, which has been taking those readings for about 18 years.

That agency, along with health departments in King, Pierce, Snohomish and Kitsap Counties, on Wednesday urged even healthy adults to stay indoors to avoid the unhealthy conditions.

A joint press release issued by the agencies said everyone should take precautions, especially children and vulnerable adults.

The agencies said air quality could improve a bit tonight, but much of the smoke will likely hang around until Thursday.

Mass agreed with that assessment.

“The computer models that actually forecast smoke suggest that it will slowly get better tomorrow, then probably a lot better on Friday,” he said.

The Puget Sound Clean Air Agency recommends people check with healthcare professionals if they have specific concerns or questions. The agency displays local conditions on its website.

Unfortunately, both Mass and the clean air agency expect the smoke to return - perhaps as early as next week.

“I’m sure that smoke will be coming back,” Mass said. “There’s just too many fires around us and eventually we’ll get the situation that brings it back in.