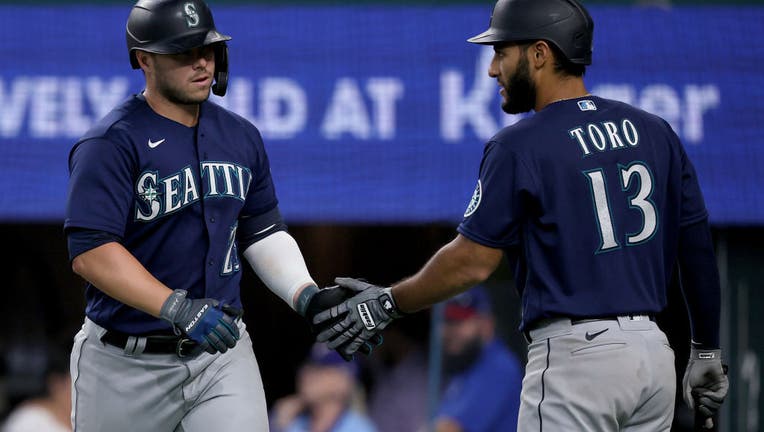 ARLINGTON, Texas - Ty France hit a two-run homer in the 11th inning and the Seattle Mariners completed a three-game series sweep with a 9-8 win over Texas on Thursday, after the Rangers forced extra innings with five runs in the ninth.

France went deep off Joe Barlow (0-1), who would have given up another homer if not for a spectacular inning-ending leaping catch by All-Star rookie outfielder Adolis Garcia, who had his glove extended over the wall in the awkward cutout fronting the Texas bullpen in right-center to rob Jake Fraley.

Joe Smith (2-1) walked a batter but benefited from an unusual double play when pitching a scoreless 10th. Paul Sewald worked the 11th for his sixth save in eight chances, though he gave up an RBI single to Brock Holt with two outs.

The big Texas ninth was capped by Jason Martin’s three-run homer with two outs off closer Diego Castillo, who suffered his fifth blown save in 20 chances. The Rangers opened the ninth with three consecutive hits off Anthony Misiewicz, who was gone after Jonah Heim’s RBI double. Castillo then struck out two, but also walked a batter on a wild pitch that scored a run before Martin pulled his fourth homer into the right field seats.

Before that big outburst, the Rangers had scored only six runs total in their previous 44 innings against Seattle, including four consecutive losses in which they scored exactly one run.

The Mariners intentionally walked Isiah Kiner-Falefa to start the 10th before Garcia, who had already homered, hit what looked like a routine double-play grounder to third baseman Kyle Seager. The ensuing double play was anything but routine. The first out was recorded, but after second baseman Abraham Toro’s high relay throw pulled France off the bag, the first baseman threw to shortstop J.P. Crawford, who tagged Yonny Hernandez after his wide turn around third.

Seattle had a 5-0 lead after two innings. Seager drove in a run with his 300th career double in the first, and Haniger hit a three-run homer in the second. The only other players with 300 career doubles as Mariners are Edgar Martinez and Ken Griffey Jr., both Hall of Famers.

Garcia’s 27th homer was a solo shot in the sixth, his fourth homer in 11 games after going deep only once the previous 20 games. He is within three of Pete Incaviglia’s Rangers rookie record of 30 homers set in 1986 and broke a tie with Mark Teixeira for the second most.

Seattle starter Chris Flexin had a two-run lead to work with before throwing his first pitch, then left after seven strong innings with a 6-2 lead. The right-hander struck out five, walked one and hit one while giving up two runs (one earned) and four hits. Spencer Howard, the 25-year-old right-hander Texas got when All-Star starter Kyle Gibson and closer Ian Kennedy were traded to Philadelphia at the deadline three weeks ago, allowed five runs and five hits in two innings.

Rangers: OF Willie Calhoun, who has missed 44 games since a bone fracture in his left forearm in June, went through a BP session Wednesday and is starting to step up other baseball activities. Manager Chris Woodward said the actual injury has healed, but Calhoun is not at full strength and won’t be rushed back.

Mariners: Head south to open a three-game weekend series in Houston, with left-hander Yusei Kikuchi (7-6, 3.82 ERA) making his fourth start against the AL West-leading Astros this season. He is 1-1 with a 3.79 ERA against Houston.