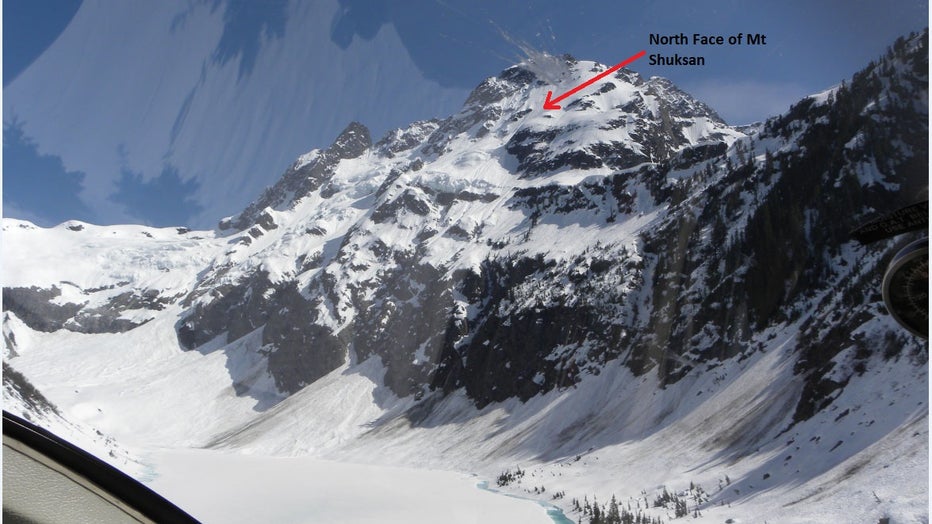 This photo taken through the windscreen of a helicopter shows the north face of Mount Shuksan in the area where the fatal snowslide occurred. (Photo by National Park Service)

MARBLEMOUNT, Wash -- A Seattle skier died Wednesday when he was swept away by an avalanche and fell an estimated 2,000 feet on Mount Shuksan in the North Cascades National Park, the National Park Service said.

The victim and a fellow Seattle skier were ascending the north face of Mount Skuksan at about 11 a.m. in order to make a skiing run when the two were hit by a snow slide, or avalanche.

One skier narrowly avoided getting hit by the wall of snow, but his partner was swept away and could not be located.

Rosemary Seifried, a spokeswoman of the National Park Service, said the survivor did an initial search of the area after the slide, but wasn’t able to find his partner and called 911.

Worried about another slide, Seifrend said, the survivor headed back down the mountain to a safer spot where he awaited rescuers. He was not injured.

At about 3:30 p.m., park rangers were able to locate the missing skier.

"Rangers were able to determine that he did not survive the fall, which is estimated at over 2,000 feet," the park service said in a news release.

Because of unstable conditions, rangers were not able to complete the recovery operation and will return Thursday morning to recover the skier's body.

The identities of the skiers were not immediately released.