SEATTLE - There was a shakeup at the state's largest school district Monday. Seattle Public Schools pushed back a start date for in-person learning, meaning some preschool, kindergarten and first grade students will stay home at least a week longer than expected.

February 22 was the deadline to reach an agreement with Seattle Education Association in order for the district to start phasing in students by March 1. Since negotiations with teacher’s union were not met, the district said the start date is pushed back to at least March 8.

The teacher’s union said it understands there is no substitute for in-person learning, but said safety is also priority. District officials said health and safety protocols, including personal protection equipment, are in place. There is a small number of students who currently receive some in-person learning.

Elisa Yzaguirre is a middle school English Language Learner and Literacy teacher in the district. She said her concern is the consistency of safety protocols at every building within the district.

"I just have to consider how big our district is and how different each of the buildings are," said Yzaguirre. "It’s complicated for me. I want to feel safe and I want my students and families to feel safe no matter which building they’re going back into. Maybe one building is doing a great job, they’ve done some updates, all of those safety issues and precautions are ready to go. And maybe that’s not the case for another building. So, my concern is that consistency."

Union members said they’re asking SPS to establish communication protocols with staff and families should there be an outbreak. The bargaining team wants the district to address equity issues so the needs for students of color or have special needs are not lost in the phased approach. Yzaguirre said the union has received feedback from teachers about vaccinations and technology for their return.

"How are the teachers going to be able to do that hybrid model in a way that is best for all students—meeting the needs for students that might be there and the ones online," said Yzaguirre.

To say remote learning has been challenging for Aparna Prasad’s son would be an understatement.

"People like him who can’t express themselves can’t really comprehend what’s going on. It’s just exponentially harder," said Prasad. "Just to see class kind of taken away has been really hard. And it has taken a toll on him."

Her 9-year-old son, Gautham, has autism and is nonverbal. Prasad said she doesn’t know how much longer she can handle him suffering without the support of his special education teachers. 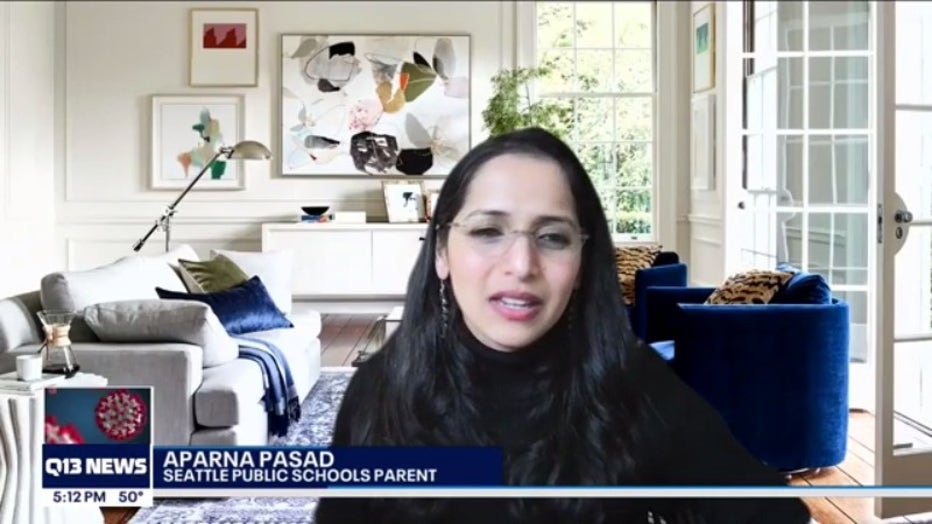 "A very small part of his Special Ed classroom is actual academic, pre-academic learning skills. There is a lot of life skills, there is a lot of social, emotional connection, and there’s just a lot of other learning that you just cannot recreate outside of that classroom," said Prasad.

The mother of two said her son has an Individualized Education Program (IEP) plan. She said she applied for in-person services with SPS in November 2020 after remote learning was not sufficient for his educational needs. Prasad said the district approved her son for in-person services in late January 2021 and was told he would receive one hour per week with an instructor.

"Essentially from the beginning of the pandemic, so March 2020 until now, my son has received two hours of in-person class or support from Seattle Public Schools," said Prasad.

The district’s website said it is, "committed to continue negotiating in good faith" with the union. Prasad said she hopes students like her son are considered in those conversations for a swift return back to school.

"I would appeal to everyone, anyone who will listen to me and moms like me to just try harder for the sake of these kids who are really depending and counting on us as a community. Let’s not fail them," said Prasad.

There is a special board meeting scheduled Thursday, February 25, at 4 P.M.  Officials will talk about the next steps on a reopening plan. The district’s website said officials will also discuss OSPIs required Washington School's 2020-21 Reopening Progress Report Template. The current bargaining update is available to read online.