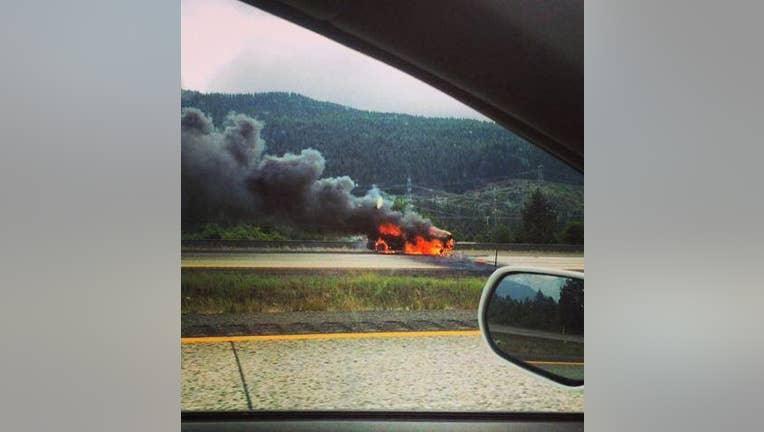 Seattle police Capt. David Emerick's pickup truck catches fire and then explodes while he and his wife were driving on I-90 toward Eastern Washington. (Photo courtesy of DJ Campbell)

SEATTLE -- What do you do when you are a Seattle police captain and you learn that the young man who probably saved you and your wife’s life is a Navy veteran and enrolled in commercial dive school? You try to recruit him to join the police department.

On June 12, David Emerick and his wife, Sally, were driving on I-90 to Eastern Washington when their 2011 Chevy pickup truck caught fire. They didn't realize it at first, as the flames started underneath.

DJ Campbell, 24, was in front of the Emericks and heading to see his father in Goldendale.

”Just coming over Snoqualmie Pass. I looked in the rear-view mirror and this truck behind me, the whole belly of this pickup was engulfed in flames," said Campbell.

He turned on his flashers and started weaving on the road.

“Your actions of moving back and forth and turning your flashers on showed me that something was wrong,” said Emerick.

When he tried to stop the truck, he discovered his brakes were out.  He was able to use the emergency brake to slow it down but then the couple saw that their electric door locks didn’t work.  They escaped through the window.

Campbell was right there, helping to steer the truck out of the roadway, even using a fire extinguisher to try to put out the flames.

Was he worried about his safety?

“I had a split-second there when I was laying on the bottom of the truck, spraying it with a fire extinguisher, that maybe this isn't the best place to be right now,” said Campbell.

Emerick shouted to him that everyone was safe and the truck was insured so he should get clear.

To show their gratitude, the Emericks gave Campbell a $1,000 check to replace the cell phone he lost when he was trying to move the truck out of the roadway and commended him for his heroic actions.

Emerick told Campbell, “After the fire was put out, you`re offering my wife your shoes and your offering to drive us back from Easton back to our home in the Seattle area. I was totally impressed because that`s not something people normally do every day and I really appreciate, partner, so here`s your check. It was my pleasure and now it's my turn to recruit (you) for the Seattle Police Department  because you are just the kind of people we are recruiting for our agency."

Emerick says they are looking for dozens of new officers, so if you are interested in applying or know someone like Campbell, go to http://www.seattle.gov/police/jobs/