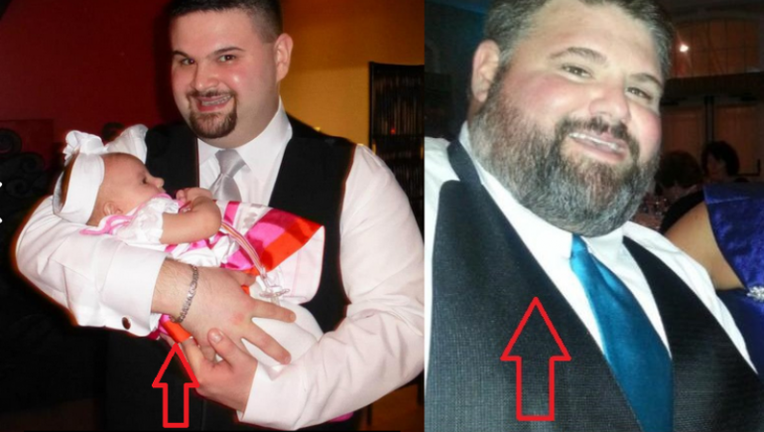 SEATTLE -- In a couple of weeks, Joey DiJulio is flying across the country for a bachelor party.

Not exactly. Joey doesn't really know who's attending the booze-filled evening. In fact, he's never even met the groom.

No, it's not the plot of a new Vince Vaughn movie, or even the remake of the old Tom Hanks movie. Joey is flying from Seattle to Philadelphia to attend the bachelor party of Jeff Minetti, a man he's never met, has no connection to and only spoken with twice via email.

How it came about

On Feb. 11, Joey was emailed from an address he didn't recognize. The email thread began:

Has anyone else noticed now that Jeff has been rocking the beard for a while - he looks like a middle aged Pavarotti? At times, he also has ventured into a bit of hipster phase. In addition to publicly questioning his fashion choices, his bachelor party will be a good time for us to celebrate him leading up to his wedding.

After the initial confusion, Joey realized that he was mistakenly invited to the bachelor party of a man he'd never met. But rather than immediately opt out of the email thread, Joey, tapping into his inner voyuer, decided to harmlessly monitor the emails without responding to them. They seemed like cool guys, Joey thought, Looking to put on a good time for their friend, Jeff.

"I call Joey DiJulio as my shuffle board partner."

So Joey watched as the emails went back and forth on where to take Jeff for his last night out as a single man. Joey kept quiet to the group, but he told his wife about the entertaining chain, and began posting updates on his Facebook.

It wasn't long before Joey's own friends joked that maybe he should go to Jeff's party.

"I was riding it out," Joey said. "I kind of joked that it would be hilarious if I went and crashed it."

A few weeks went by, and Jeff's brother sent out another message to the email chain, in which Joey was again included. Jeff's brother asked everyone who had not responded to the chain to RSVP if they were coming to the bachelor party or not.

Joey knew it was time to fess up. He emailed the group saying he had been included in the chain by mistake. He wished all the guys a good time, and to drink some beers for him:

So, I have no idea who any of you guys are, but I have been enjoying being a fly on the wall hearing about the plans for this bachelor party over the last few months.

I'm assuming my E-Mail address was added to the list by mistake (perhaps a typo of someone else?).

I live out in Seattle, WA and although for a moment I thought it might be funny to just show up and be that guy nobody knows but everyone wonders "who is that guy?", buying a plane ticket for a cross-country flight just to crash a bachelor's party might be a bit over the top (although it would be epic!).

Nonetheless, I do hope you guys have a great time and I'd like to take a moment to wish the best of luck in life to the groom!

It wasn't long before emails from Jeff's friends, those really invited to the party, peppered Joey's inbox.

I say everyone forks up an extra $20 and we get Joey a plane ticket to Philly!

just facebooked Joey DiJulio in WA, and if this is you - you actually look like you could be related to groom. MIND BLOWN

I call Joey DiJulio as my shuffle board partner.

Jeff, the groom, even replied:

I'm overnighting you a wedding invite. You show up at the bachelor party and ill make you my best man. You can give the toast even

As the positive replies came in, the idea that started as a joke again came to Joey's mind. What if he actually attend the bachelor party? They were cool guys, who were much like his own friends. You only live once, right?

Should he really go?

Hey man, I know we've never met. But what if I actually came to your party? Would that be too weird, or...

Jeff's answer was clear. You need to come out here.

On Monday, Joey decided to start a GoFundMe page, called "Bachelor Party 4 Guy I've Never met" to help finance a nearly last-minute trip to Philadelphia. He set up a goal of $1,264 for flights and hotel. He surpassed the goal in less than 24 hours. He  then upped the goal to $10,000, with hopes of giving the rest to Jeff so he and his future wife could have a picture-perfect honeymoon to Italy.

"I want to turn this fun story into something that's meaningful for them," Joey said.

On March 27, Joey will fly out. Jeff will pick him up at the airport and drop him off at the hotel. The next day, they'll get to celebrating, something Jeff and his friends are looking forward to.

"I got about 17 beers coming my way," Joey joked. "After I told the email group I was coming, everyone was pretty excited."

When asked if he thought it could get weird to party with people he's never met, Joey shook it off. He watched the guys in the email chain interact. The way they talked and goofed around with each other, they reminded him of his own friends.

"It's kind of funny the parallels (the group) shows," he said. "It's like on the total other side of the country, they are like my group of friends. They seem like awesome guys."

As media attention about Joey's story ramps up, he's made one thing clear: This is Jeff's day. Joey is going as a quirky, fun element. A piece to make the bachelor's day even more memorable.

Remember when that guy you never met flew out to your bachelor party, people will ask Jeff years later.

How could anyone forget?