An overlapping surgery is when a surgeon may be running multiple operating rooms at the same time.

As a point of clarification, spokespersons for UW Medicine, Harborview, Virginia Mason and Swedish all said they do not allow concurrent surgeries, but do allow overlapping surgeries.

Concurrent surgery is when the critical component of two procedures for which the primary attending surgeon is responsible are occurring at the same time. The American College of Surgeons does not endorse concurrent surgeries.

In overlapping surgeries, the critical components of two procedures are not occurring simultaneously, allowing the primary surgeon to be in the operating room during the critical portions of each procedure. 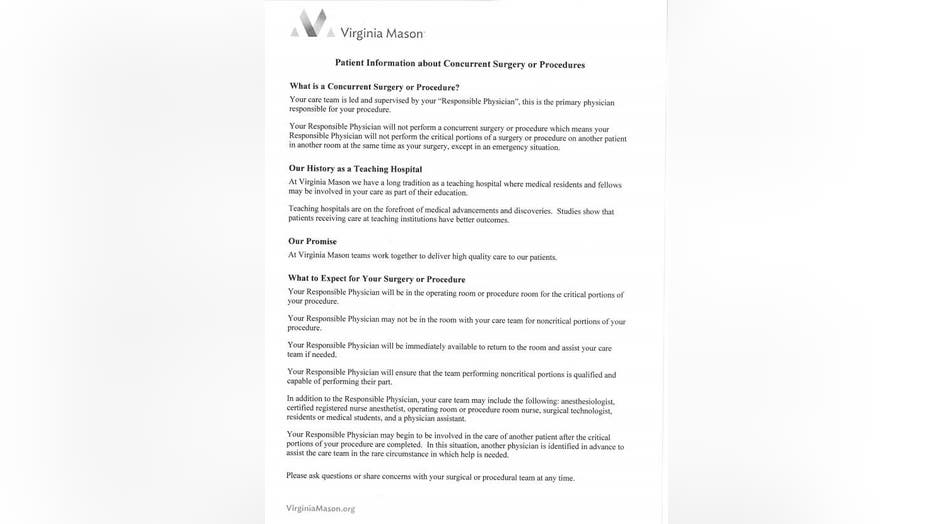 How often are there overlapping surgeries?

UW Medicine said overlapping surgeries are only scheduled in a minority of cases at its center.

Why do hospitals allow overlapping surgeries?

"They help us manage busy operating rooms by allowing us to use resources more efficiently and reduce wait times for elective surgeries. At trauma centers and in emergency situations, they are often necessary when multiple patients need surgeries at the same time," said Susan Gregg, spokesperson for UW Medicine.

Why are they letting patients know now?

"We recognize that patients need to know our policies in advance to make informed decisions about their surgical care. Over the past year, we have updated our surgery protocols to implement the ACS guideines and to stay current with national standards and best practices," said Gregg.

Gregg added the new process includes transparency of the surgeon's surgical plan. She said the explicit consent form informing patient's of the possibility of overlapping surgeries was formally put in place at both Harborview and UW Medical Center in April 2017. 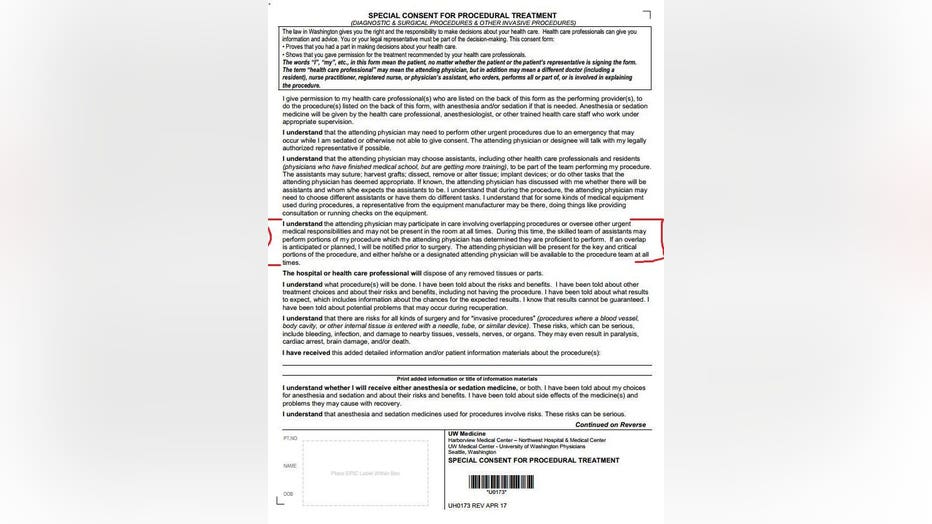 Form given out to patients at UW Medical Center before surgeries

"At UW Medicine, we are committed to ensuring the highest quality of care, safety and transparency in support of our patients," said Gregg.

Virginia Mason said development of the handout began about 18 months ago by its surgery team, after the American College of Surgeons made it a point to improve communication about overlapping surgery. The development included several rounds of content review by patients and their families.

A study from the Mayo clinic compared the outcomes of thousands of such overlapping surgeries with non-overlapping operations at its Rochester campus and found no difference in the rates of postoperative complications or deaths within a month after surgery between the two groups.