Seattle distributes thousands of vaccines to vulnerable members of the community

SEATTLE - The City of Seattle is distributing thousands of vaccines to vulnerable members of the community who may not be able to get the shot on their own.

Studies show that across the country there has not been equity when it comes to who is getting the vaccine.

So far, the city has vaccinated more than 3000 people through mobile vaccine clinics ran by the fire department.

"We do a pop-up event, like this, where we’re working with community partners to be able to serve their community. We’re doing one of those a week and then we’re going into affordable senior housing facilities," said Sarah Smith with the Seattle Fire Department.

The department has about 1000 vaccines they can distribute a week. They are focusing their efforts on folks most at risk. 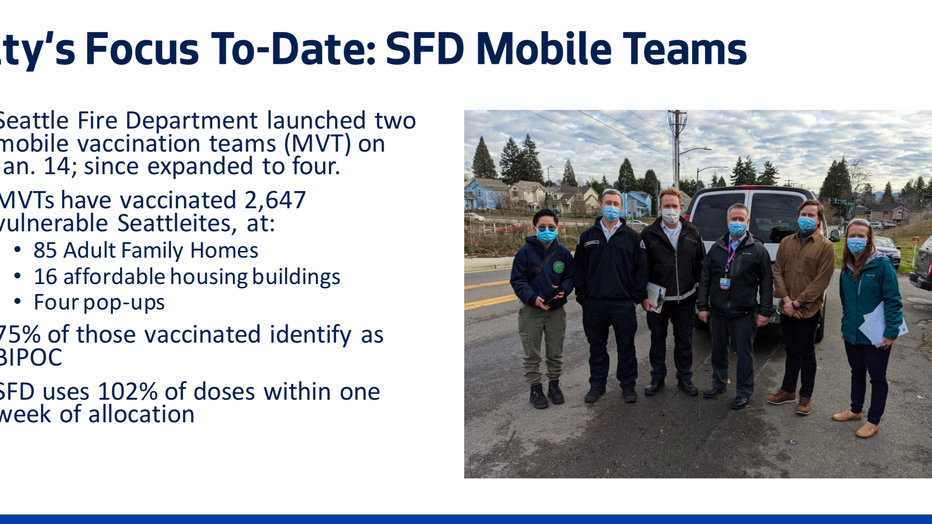 The city reports 75 percent of the vaccines distributed have gone to folks who identify as people of color.

"She says she feels safe now that she got vaccinated," said Marta Deneke.

Deneke spent the afternoon at the Ethiopian Community in Seattle building, on Rainier Avenue South, with her grandmother who was scheduled to get the vaccine.

"She said it didn’t hurt. I remember when we were signing her up, she was kind of scared cause she saw on the news how people were getting vaccinated, but she said it was not bad," said Deneke.

Now, Deneke said her family has a little more piece of mind when leaving the house.

"I’m so proud of this event today because a lot of these individuals would have such a hard time be able to navigate you know online technology to find an appointment when there aren’t that many especially when it’s not in their language as well," said Smith.

The Seattle Fire Department held two separate events on Friday; the other clinic was with the Seattle Housing Authority. The department is holding another event on Saturday.