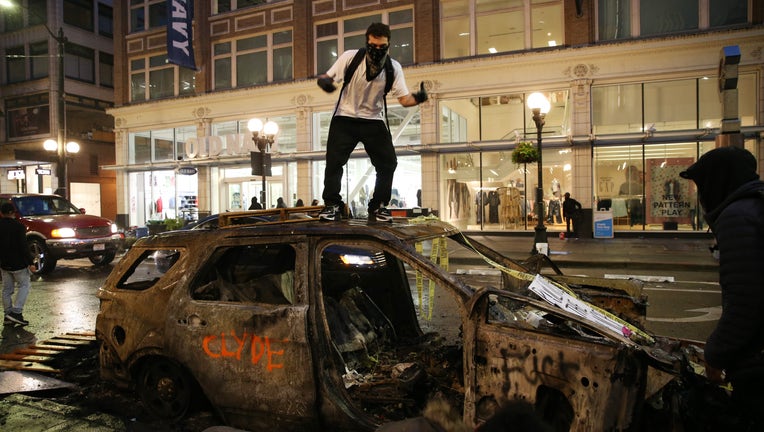 SEATTLE, WA - MAY 30: Protesters riot in the streets following a peaceful rally expressing outrage over the death of George Floyd on May 30, 2020 in Seattle. (Photo by Karen Ducey/Getty Images)

SEATTLE - Heading into November, the political playbooks for both major parties are clear: Democrats will work hard to tie even moderate Republican candidates to Trumpism. Republicans will accuse Democrats of building the nation in Seattle’s image.

Conjuring memories of lawlessness in the occupied protest zone known as CHOP, President Trump has repeatedly drawn Seattle into the national political dialogue in recent months.

During what was supposed to be a coronavirus briefing Tuesday, Trump once again drew a dire picture of life under Democratic leadership.

“What you’re seeing in Portland, Seattle, New York, Chicago is really the Democrat roadmap for America,” he said. “If the left gains power, no city, town, no suburb in America will be safe.”

“Kamala Harris is a radical liberal who would raise taxes, take away guns & health insurance, and explode the size and power of the federal gov’t,” Cheney tweeted. “She wants to recreate America in the image of what’s happening on the streets of Portland & Seattle. We won’t give her the chance.”

Both the president and the US attorney general made comments about Seattle Police Chief Carmen Best Tuesday.

Local political races are no different.

In an interview on “The Divide,” Washington State Republican Party Chair Caleb Heimlich warned that a third term for Gov. Jay Inslee would spread the politics of Seattle across the Cascades.

As the Seattle City Council readied a vote to cut from the police department’s budget, state House Minority Leader J.T. Wilcox, R-Yelm, suggested it was just a matter of time before such efforts made their way to the capitol.

“Politicians who sign up for ideological slogans create life and death consequences for real people and what they implement in Seattle almost always comes to the State Legislature,” he wrote on Twitter. “This is what the 2020 election is about in WA.”

The left’s 2020 strategy is just as predictable.

Democrats will urge America to reject the “toxic populism” of President Trump, working hard to label even moderate Republicans as the president’s henchmen.

In Washington state, where the president’s approval rating is abysmal, the comparison is meant to sour moderate voters on Republican candidates.

Democratic Party Chair Tina Podlodowski was quick to draw Trump comparisons in an interview on the “The Divide” following the August 4 primary.

“I kind of feel sad for the Washington state GOP. They’ve truly become the party of Trump and it’s not surprising that they chose the best imitator of Trump,” she said, referencing Loren Culp, the small-town police chief tapped to take on Inslee in November.

Culp is an unabashed Trump supporter, which makes the inference less surprising. But Podlodowski didn’t stop there.

“Their party is now Trump’s party from the top of the ticket all the way down the ballot.”

Without prompting, Podlodowski brought up Minority Leader Wilcox, who is running for re-election to Legislative District 2, calling him a “Trump Republican.”

Pressed to explain why she called Wilcox – considered one of the more moderate and bipartisan Republicans in Olympia – a “Trump Republican,” Podlodowski brought up state Rep. Matt Shea, the Spokane Valley Republican who opted not to seek reelection after a House-commissioned report accused him of domestic terrorism.

Wilcox kicked Shea out of the Republican caucus, but did not pursue a vote to censure or remove him from office because, in Podlodowski’s opinion, “his caucus is full of people like Matt Shea.”

While there’s something to be said for motivating your base, the strategy of likening Republicans to Trump is really only effective if right-leaning voters consider it disparaging. And given the choice of Culp to move on to the general election, combined with the relatively poor performance of moderate Republicans on the ballot for governor in the August primary, the pool of voters put off by Trump comparisons is growing smaller.

Similarly, the Republican strategy of striking fear into the hearts of voters worried about Seattle-style leadership seeping into the suburbs only speaks to voters who already feel that way.

Both the Democratic and Republican 2020 strategies assume there are still voters who haven’t made up their minds on Trump or Seattle – increasingly unlikely in today’s polarized political climate.

But if campaigning off fear isn’t effective, what’s left?

God forbid candidates have to start campaigning on their own qualifications.