SEATTLE -- There’s a hashtag trending: #CloseTheCamps.  It’s part of a larger movement across the country for protests from people demanding an end to migrant camps along the southern border.

It was standing room only in the office of Congresswoman Pramila Jayapal on Tuesday.

“If you try to put my kids’ lives in danger then I’m going to do whatever the hell I can to save their lives,” said Jayapal.

Strong words after images of what many are calling terrible, inhumane conditions at migrant detention centers across the country.

“This is not who we are. I am so sorry that happened to you on our watch,” said one protester. 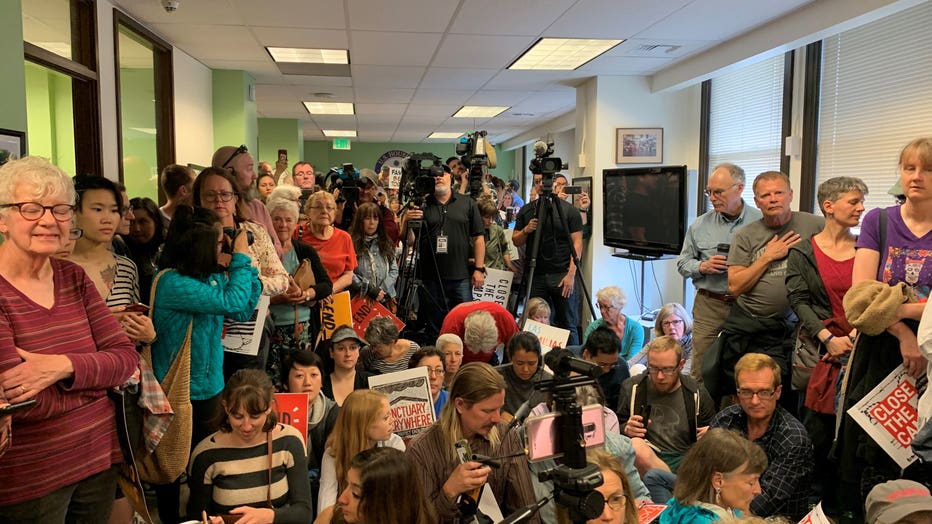 Speakers at Tuesday’s rally shared their first-hand experiences at the border talking to detainees.   Congresswoman Jayapal went to the border and inside detention centers last year.  She voted against more funding to border patrol.  Critics argued she’s getting in the way of more aide to migrants in need.

“Eighty-eight percent of these children held in these camps at the border have relatives in the US. So money is not the issue. I don’t believe giving money to border patrol is going to fix these issues,” said Jayapal.

“There have been deaths happening in these camps,” said DACA recipient and Venezuelan immigrant Graciela Nunez Vargas.

Vargas got in front of the crowd and pleaded for help.

Jayapal says the way to help is to give aid to those Central American countries in crisis. She also thinks the US should extend a path to permanent status to those migrants just like the US offered to European immigrants from the Soviet Union.

“You give a specific type of entry visa with permanent status to a particular region that is very troubled,” said Jayapal.

Rep. Jayapal says the judiciary committee will hold another hearing on family separation at the end of July, followed by a hearing on her bill to ban for-profit detention centers.