More than a month after US and South Korean officials publicly declared North Korea was ready to set off a nuclear bomb and almost two weeks since analysts said North Korea's only nuclear test site, Punggye-ri, was "primed and ready," no detonation has happened.

Michael Hayden, the former head of the CIA, along with other experts and analysts, has predicted that North Korea will probably be able to hit Seattle with a nuclear weapon aboard an intercontinental ballistic missile.

Richard Ellings, the President of the National Bureau of Asian Research, along with others, firmly agrees that North Korea doesn't have the capability for its missiles to reach Seattle yet, and likely won't in the immediate future.

Could tensions turn into war in North Korea?

Interestingly, as first reported by The Seattle Times, Washington state law actually prohibits officials from creating a response plan specifically for a nuclear attack. Former state representative Dick Nelson sponsored the bill back in the 1980s in an effort to keep the federal government from coercing the state into planing for nuclear war.

“We’re prevented from coming up or preparing a specific plan to address a nuclear attack,” Karina Shagren, spokesperson for the state’s Military Department, told the Times.

What about the missiles?

Ellings says the missiles North Korea has right now can reach any part of Japan and South Korea. But it’s the intercontinental missiles the country is testing that are a concern for the West Coast of the U.S.

“There are missiles that are under development … that will certainly be able to hit the West Coast and especially Seattle, which is an ultimate target,” Ellings said.

The KN-08 is a three-stage, road-mobile ballistic missile with an intercontinental range. This image from the CSIS Missile Defense Project shows the missile's possible range. You can see the orange line, the missile's outer limit, cuts across Washington state. 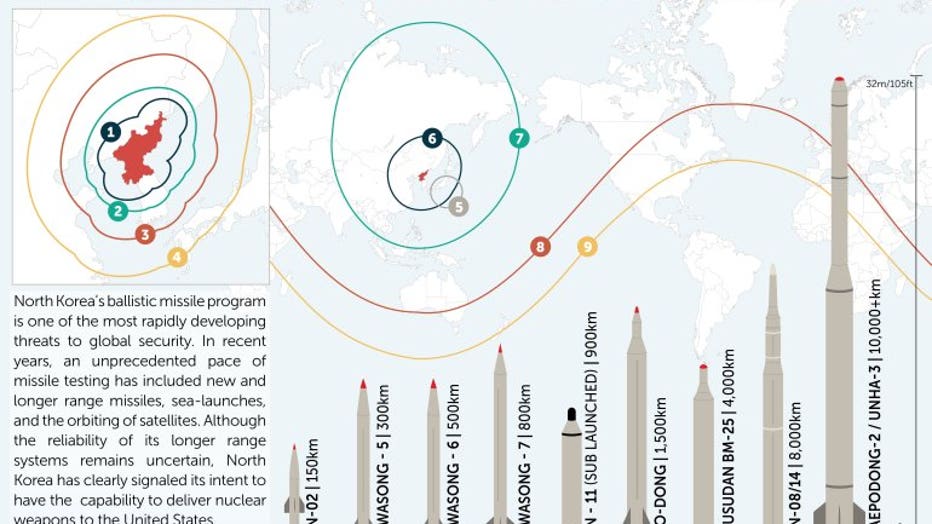 The chart below shows the number of North Korean missile launches has steadily increased since 1984.

Pressure from China and the United States could be a factor, though experts caution it's hard to tell, as North Korea often reacts to international pressure and punitive measures with defiance.

China, North Korea's most important backer and economic lifeline, appears to be getting fed up with the destabilizing behavior from its neighbor. If Beijing were to hit Pyongyang with stringent measures like stopping oil exports, the North Korean economy could flatline, experts say.

On the US side, President Trump and his administration say that "all options are on the table," including military action.

It's also moving military assets to the region -- including the USS Carl Vinson Navy strike group, though there was some confusion about the timetable, and one of its most powerful submarines -- in what analysts say is a show of force.

If North Korea believes Trump is serious about putting a military option on the table, that looming threat could push Kim to the negotiating table as it did his grandfather, former US Secretary of Defense William J. Perry told CNN's Christiane Amanpour.

In 1994, Kim Il Sung, the then-President of North Korea, "believed that the United States was prepared to take military action, and that played a big role, I think, in his calculus," he said.

"Today, I think it's probably true that the present North Korean President believes it's possible the United States is prepared to take military action," Perry said. "Paradoxically, the dangerous situation we're in right now has created the environment in which diplomacy actually might be successful."

NEXT: Local group hopes to de-escalate Middle East tensions by forming a sister city with Iran

H/T The Seattle Times | CNN contributed to this article