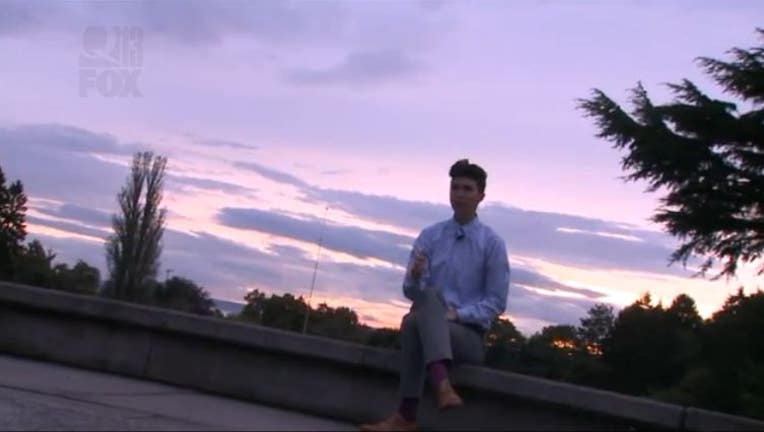 SEATTLE -- A local woman is hoping to help the world think outside the box when it comes to the after-life. She says Seattle is the perfect place to start – and she's not alone.

Grace Seidel feels most alive when she’s in her garden.

“If I could give back a little piece of myself for everything the planet gave me, I would be honored to do that. It feels more humble,” she said.

That’s why she would like to become part of the soil she cherishes in life when she dies.

“The idea of having a more natural burial and bringing my body back from once it came sounds really appealing to me,” she said.

Thanks to Katrina Spade, Grace may get her dying wish.

“We are made up of nitrogen calcium and phosphorus and when we are coupled with high carbon material like wood chips and sawdust we turn into compost; we make excellent compost.”

A Seattle–based designer with a master’s degree in architecture. Katrina began pondering her own mortality during a decomposition class.

“Why not have more options? Why do we just have cremation and burial? Why couldn’t we have six or seven options and shouldn’t they all be environmentally friendly and meaningful?”she asked.

Turned off by the environmental consequences that are caused by traditional burial and cremation, Katrina conceived the “Urban Death Project” -- a multi-tiered building where a collective pile of bodies can compost over time and ultimately be used as fertilizer.

“I am seeing one in every neighborhood, in every city in the world,” Katrina said.

She now has plans to build the very first Urban Death Project, right here in Seattle.

“It’s a place where people are innovative, a little bit alternative and not afraid to be a bit different from the rest of the world,” she said.

The concept is simple. But it is spiritual, too. Family members would carry the body, wrapped in linen, of their loved one to the core of the building, placing the body into a vessel containing wood chips and sawdust.

“The vessel is covered and its aerated mechanically because oxygen is an important part of this process,” she said.

Over the course of two weeks, she said, the temperature in the vessel rises to 140 degrees, destroying any pathogens and turning the body to compost, which is then finished and cured over an additional two weeks.

“And after that, it’s ready to be used to grow new life,” she said.

“The family can come back after one month and take some of that compost and use it for their gardens or grow a special memorial or grow on their land anything they wanted.”

Katrina is also working to create partnerships with city parks where she hopes the compost will be used to grow new landscapes.

“It’s about folding the dead back into the community that they lived in and they loved,” she said.

Grace is a fan of the idea. “Why not be the first place to try something like the Urban Death Project? Why not be innovative and try to think outside the box,” she said, laughing. “No pun intended.

“Now you’re part of that tree or a part of that pea patch or part of the world around you. You don’t just float away as dust in the air or rest in a box forever, you continue to live.

“You get to be part of the earth again. I think it’s a really nice way to go,” Grace said.

Katrina hopes to raise $150 thousand over the next year to get through the design process and build her first prototype. As for permitting and licensing, she’s working with a company in Bellingham to explore her options.

The King County Health Department tells us right now this would be considered an unlawful disposal of human remains. For the project to work in Washington state, there would to be a change in state law.

For more information go to urbandeathproject.org