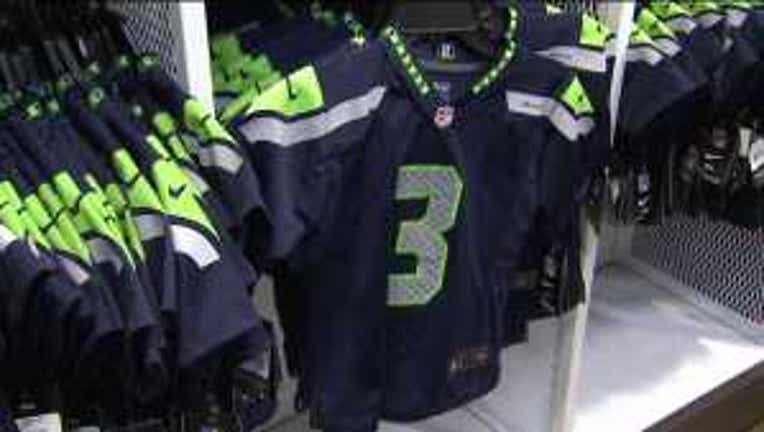 SEATTLE -- Seahawks merchandise of all sizes, shapes and colors is flying off the shelf, local business owners said Monday.

A lot of the gear is completely sold out, including some items at the Seattle Seahawks pro shop at CenturyLink Field, leaving many scrambling in to gear up for the Seahawks and Atlanta Falcons game Sunday.

"We really can't get stuff fast enough," Scott Heinemann, the assistant manager of the Seattle Team Shop, said Monday. "With the Seahawks playing the way they are, we've been really busy, people coming in the door every minute or two."

"We get the Wilson in, and in a couple days they're gone," Heinemann said.

Other shops in the area have stocking troubles, too. Dick's Sporting Goods was sold out of Russell Wilson jerseys Monday, and Marshawn Lynch and Sidney Rice jerseys were going fast. Byron Monahan, a Seahawks fan for more than 30 years, said he needed to update his family's gear at the shop, but couldn't find the exact sizes they were looking for.

"We wanted Lynch in women's medium, but they were sold out," Monahan said.

The pro shop anticipates a shipment of new merchandise in soon, Heinemann said. But he's sure that will go quick, too.