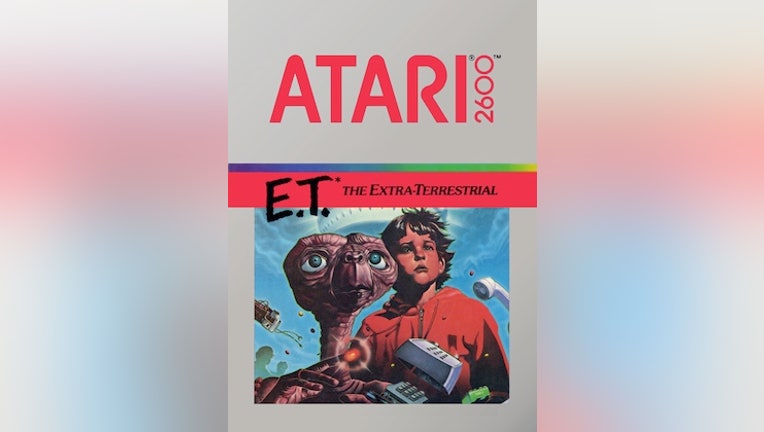 When electronics pioneer Atari rushed a game based on the 1982 Hollywood blockbuster to market for its then-dominant home consoles, it was a flop, compounded by the fact that the infant industry was hitting its first slump at the time.

So Atari literally buried the project, dumping truckloads of unsold games in a desert landfill in New Mexico. And amid a decade of entertainment-industry disasters bookended by the movie "Heaven's Gate" and Milli Vanilli, the "E.T." game quickly faded into urban legend.

No, really. And over the weekend, with a couple of hundred onlookers watching, excavators led by a documentary film crew began to unearth stacks of 30-year-old Atari cartridges from a landfill outside Alamogordo.

"Urban legend CONFIRMED," Larry Hryb, one of the creators of Microsoft's Xbox gaming platform, reported via Twitter from the dig site. Microsoft's Xbox Entertainment Studios is one of the backers of the planned documentary, tentatively titled "Atari: Game Over." Hryb also tweeted a photo of the first cartridge to be dug out.

One of those on hand was Howard Scott Warshaw, the game's designer. When excavators started to retrieve the first of what may be hundreds of thousands of copies of his misbegotten baby, "Everybody went nuts," Warshaw said.

"I've been carrying this thing, the theoretically worst video game of all time, for 30 years now," he said. "It was a game that was done in five weeks. It was a very brief development. I did the best that I could, and that's OK."

But seeing the cartridges emerge from the desert dust was a rush for Warshaw, who's now a Silicon Valley psychotherapist.

"Something that I did 32 years ago is still creating joy and excitement for people," he said. "That's a tremendously satisfying thing for me now."

Atari, which still designs games but no longer makes its own platforms, did not respond to a request for comment Sunday. In 1983, struggling under the weight of a failed product and a grinding national recession, the company dumped 14 truckloads of merchandise from a plant in El Paso, Texas, at the Alamogordo landfill, the New York Times reported at the time.

None of the cartridges unearthed over the weekend was playable, Warshaw said. But he said there may be as many as 750,000 of them in the landfill, with many successful titles mixed in with the "E.T." games.

"It was the end of the first product life cycle, and nobody really knew what they were doing," Warshaw said. Now, manufacturers are designing their next systems even as their new ones start shipping to stores.

"It was a very wacky company, but that's one of the things that made it amazing place to work," said Warshaw, who's come to embrace the game's infamy.

"I don't really believe it's one of the worst games ever, but I really like it when people identify it that way," Warshaw told CNN. And because he also designed of one of Atari's best-rated games, "Yars' Revenge," he said, "I have the greatest range of any game designer in history."