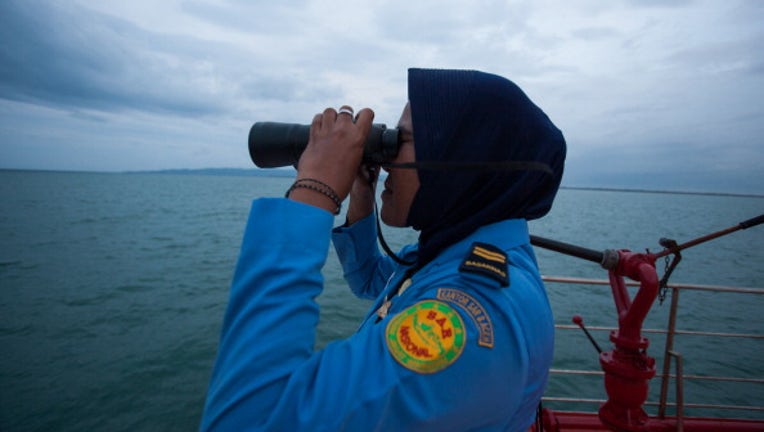 A member of Indonesia's National Search and Rescue looks over horizon during a search in the Andaman Sea area around northern tip of Indonesia's Sumatra Island for the missing Malaysian Airlines Flight MH370 on March 17, 2014. (Photo: Chaideer Mahyud

BEIJING — The search for missing Malaysia Airlines Flight 370 has expanded to cover an impossibly vast swath of Asia extending from Kazakhstan to Australia, with Malaysia appealing for as many airplanes and ships as the world can provide.

The countries where the Boeing 777 and the 239 people aboard could have gone, based on a signal picked up by a satellite, stretch north and west from the plane's last known location and include Kazakhstan, Uzbekistan, Pakistan, Bangladesh, India, China, Myanmar, Laos, Vietnam and Thailand. Another arc stretches south and west between Indonesia and Australia and well into the Indian Ocean.

"We are looking at large tracts of land … as well as deep and remote oceans," Malaysia's acting transportation minister, Hishammuddin Hussein, said Sunday at a news conference in Kuala Lumpur, the capital.

Earlier search efforts focused on the flight path between Kuala Lumpur and Beijing, over the relatively shallow Gulf of Thailand, but investigators now think it is more likely the plane headed over the Indian Ocean, with an average depth of 13,000 feet.

Family members are holding out hope that the flight was hijacked and landed in some obscure location where the passengers are being held for ransom.

"My gut feeling is that it landed. I still feel his spirit. I don't feel he is dead," said Sarah Bajc, a 48-year-old American teacher living in Beijing whose partner, Philip Wood, a 50-year-old IBM executive, was a passenger on the flight.

Malaysian officials said they are not yet classifying the incident as a hijacking and are considering a suicide mission by one of the passengers or crew. The pilot and copilot are high on the list of potential suspects, because of the expertise required to divert the plane. Both the Aircraft Communications Addressing and Reporting System, or ACARS, and transponder were disabled shortly after takeoff.

The final, reassuring words from the cockpit — "All right, good night" — were spoken to air traffic controllers after the system had already been disabled, and whoever was speaking from the cockpit did not mention any trouble aboard.

Despite speculation about Islamic terrorism, neither pilot had ties to militant groups. Malaysian officials said Sunday that the two had not requested to fly together on Flight 370.

The officials also said they had re-investigated two Iranian men on the flight who were traveling on stolen passports and were sticking with their original determination: that the two were trying to sneak into Europe as economic migrants and had no terrorist links.

The flight departed Kuala Lumpur for Beijing at 12:41 a.m. March 8 and disappeared from civilian radar within 50 minutes. However, Inmarsat satellites picked up tracking information suggesting it remained in flight until at least 8:11 a.m. The satellite was only able to report the distances of the plane, not its exact position, so the search is following the two long arcs — one extending north toward Kazakhstan and the other southwest over the Indian Ocean.

Aviation geeks using airport data from X-Plane, a flight simulator website, have identified more than 600 runways within range of the nearly 3,000 miles that the plane could have traveled from Kuala Lumpur.

The flight carried 227 passengers, 159 of them Chinese citizens.

"There's still hope for my daughter and her husband to be alive," the parents of one young woman told the Beijing News.

The problem with the hijacking theory is that no group has come forward to take credit for the airplane's disappearance or to make demands.

"That makes it very difficult for us to verify if it is a hijacking or a terrorist act," Hishammuddin said.