NORTH BEND, Wash. -- A 56-year-old man went up Denny Creek trail in the Alpine Lakes Wilderness area and was expected home Sunday afternoon. Aumaraswami Rao, who goes by 'Kumar,' hasn't been seen since.

"Please be on the lookout for our dad."

His family spent all day Monday searching, and they are still very optimistic he will be found safe.

“His family misses him very dearly."

Alaka Rao and her brother are here searching for their father alongside 30 King County Search and Rescue crew members.

“If you are hiking in the Alpine Lakes Wilderness in the North Bend area over the next few days… please be on the lookout for our dad, his name is Kumar.”

“His intention wasn’t to be out here for many days." 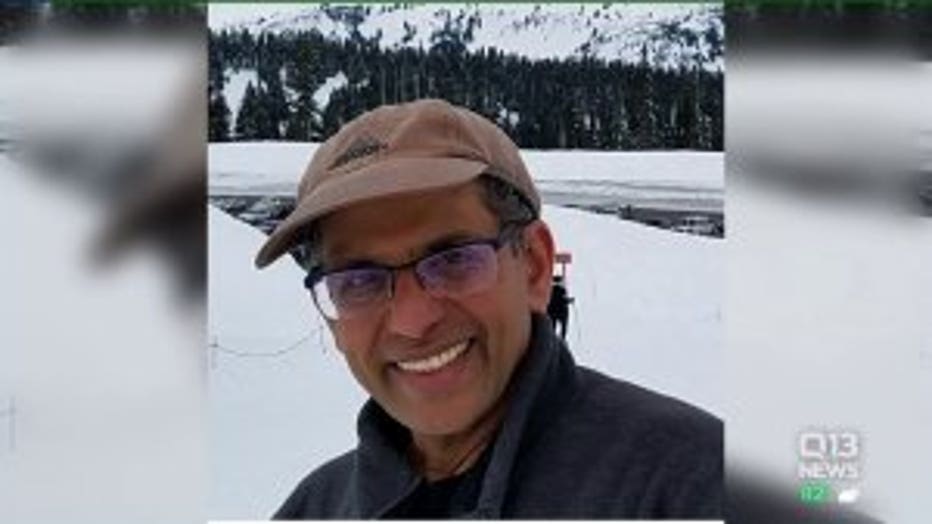 Kumar left around 6 in the morning Sunday and was expected to be home around noon—when he wasn’t, his family reported him missing.

“He was wearing a skull cap, blue clothing, a backpack and possibly carrying a camera and tripod.”

Sixty searchers were out Sunday along the path Kumar could have taken.

“His intention wasn’t to be out here for many days, he had planned on being back fairly quickly," said Sgt. Ryan Abbott with the King County Sheriff's Office.

“The area that they are searching is larger than the city of Seattle."

While Denny Creek Trail is only about 3.8 miles, the area where they are looking is much larger because rescue crews believe he could have gone off the trail and gotten lost.

“The area that they are searching is larger than the city of Seattle, so they have a very large area to search. I know that if anybody is gonna find somebody, it’s gonna be our search and rescue crew. They’re amazing.”
The search team members Q13 News talked to said they don't really know how much hiking experience Kumar had, and say that he didn't seem overly prepared for a worst-case scenario. They will have crews and dogs searching again Tuesday morning.