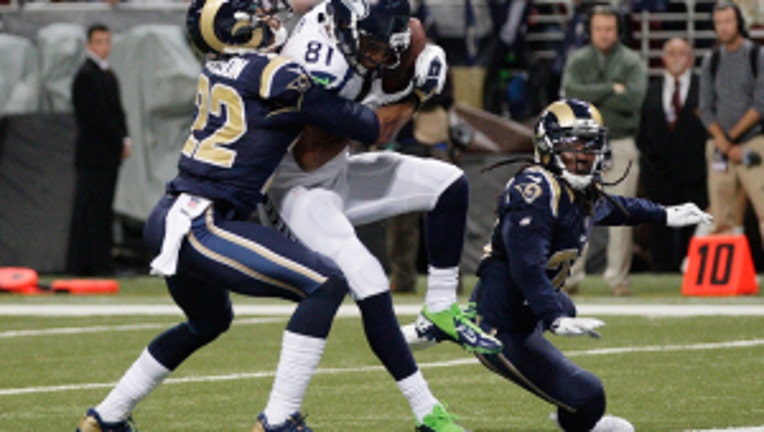 ST. LOUIS -- It wasn't supposed to be this close.

The St. Louis Rams came within one yard of beating the division rival Seattle Seahawks on Monday Night Football, only to come up short and lose 14-9.

In a game that saw sloppy play on both sides, as well as long drives failing to end in a touchdown for Rams' backup quarterback Kellen Clemens, it came down to a last-minute goal-line stand for the the Hawks defense to determine the outcome of the game.

The Rams had the ball 1st and 6 at Seattle's 6 yard line with a little less than a minute to play in the game. A couple of incomplete passes and a 5-yard run from Rams Daryl Richardson brought the ball to Seattle's 1-yard line on 3rd down.

That's when a defense, beleaguered by the run and a game time possession that heavily favored the Rams, stepped up, stopping Richardson on the 1-yard line for no gain on third down. A 4th down pass from Clemens drifted over the head of Brian Quick with no time left on the clock to cement a Seahawks victory, giving the team a 7-1 record on the season.

After the game, cornerback Richard Sherman spoke on the defensive struggle that was the Hawks' seventh win.

"Championship teams need this," Sherman said. "They need to face adversity. We were able to make big plays when we need them."

Despite the ending stand, the Hawks seemed to have little business winning the game. The team only had seven first downs to the Rams' 23. The Hawks only had 40 plays to the Rams' 71 and only managed 135 yards to the Rams' 339. The Hawks also had 10 penalties for a total of 83 yards.

One of the Hawks' few good moments other than the ending stand was two interceptions thrown to the defense by backup quarterback Clemens, who was in for Sam Bradford, who is out for the season with a leg injury. Another nice play came on an 80-yard touchdown bomb from Russell Wilson to Golden Tate for the longest touchdown of Wilson's career.

Sidney Rice left the game with a knee injury. His prognosis was unknown late Monday night.

The Hawks will look to improve their rushing defense, offensive line and overall play before the Tampa Buccaneers come into town Sunday, Nov. 3.

Live Updates from the Game

-- Rams are on the Hawks 20 with two minutes left to go. Jon Gruden says the Hawks are "on the ropes." What do you think?

--Kellen Clemens is throwing rockets here in the 4th quarter. Rams are in Seahawks territory. 3:20 left to go in the game with the Hawks up 5.

-- Chris Long has another sack on Russell Wilson. What is that, like seven now? Sometimes it's hard to watch these sacks. Hawks lead with 5:50 left in the game.

-- 50-yard field goal attempt is no good for the Rams. Seahawks get the ball back with good field position with 8:28 left in the game. They're up 14-9.

-- Rams are driving again. On a penalty note: We've seen a total of 15 penalties for more than 130 yards.

4th Quarter-- Big sack time! Rams will have to settle for a field goal here. Hawks are on top 14-9 with 12:51 left in the fourth quarter.

-- Enough penalties for you? The refs should keep the flags away.

-- So who knows what's going on with this challenge? Looks like its St. Louis ball with a 3rd and 16 on the Hawks 46.

-- Browner called for hitting a defenseless receiver. Rams have the ball on the Hawks 40.

-- Hawks have 0 yards with 0 first downs on their past four possessions.

-- Rams can't get the first down, but Richard Sherman is injured on the play. Lets hope he's all right. Aaron Levine is yelling he's up and jogging off.

-- Bobby Wagner called for a penalty. Seahawks have only 42 yards. Lets see if the Hawks can get moving. This is a division game, Hawks.

-- Hawks again being pushed by the Rams run offense. First down at the Rams 25 and they are driving.

-- Seahawks are forced to punt from their own endzone. Rams will get the ball at about the Seahawks 46.

-- Seahawks sacked again! Wilson has been sacked on four of his last five pass attempts. It's 3rd and long from their own 2-yard-line.

-- The Rams are with a 3 and out. Rams are third in the league in dropped passes.

-- Another sack for Russell Wilson. That's the fifth one of the game. The Hawks will have to punt.

Seahawks lead the Rams 7-3 at the end of the first half.

-- Russell Wilson is sacked again. The Rams have four sacks in the game. Wilson is getting banged up.

-- Here come the Hawks and a 2-minute drill. They're at the Rams 46. Golden Tate can't hold on to the first ball.

-- Sidney Rice's knee was a cause for concern earlier this year. Lets hope he's OK.

-- Hawks get the ball back and look to build off that momentum. Maybe build up Marshawn Lynch, who only has 5 yards running in the game. Sidney Rice in the locker room with an injury. He has a knee injury.

-- The Rams will get the ball at their own 21. Seahawks looked OK on the last drive, were really boosted by the Legion of Boom and a timely interception.

-- Touchdown Seahawks! Wilson to Golden Tate on a 2-yard TD pass puts the Hawks up 7-3 with 5:37 left to go in the first half. #GoHawks #SEAvsSTL

-- Back to back bootlegs? Where is the Beast Mode? Wilson is taking a lot of hits here.

-- Multiple fouls on the Rams. Seahawks get the automatic first down.

-- Hawks have a first and goal on their own 9. This is looking more like it.

-- Another Seahawks interception! Richard Sherman has four interceptions on the year. A pretty nice return to the Rams 26.

-- Stacy goes up the middle and into the Seattle territory for a 13-yard gain. It seems like every rush for the Rams is long.

-- The Rams are looking good running the ball, with another first down from Richardson with 9:23 left to go in the first half. Seahawks haven't been able to get much, besides the interception.

-- The Hawks defense has done pretty good so far, only allowing 80 yards. But it's time of possession that could ultimately hurt the team, as the Hawks defense seems to be on the field for a long time.

-- Another 3rd down from the Hawks. Have yet to convert a 3rd down. And they can't do anything here, either. Seahawks are again forced to punt.

2nd Quarter -- The cheer on the Rams field is coming because the St. Louis Cardinals just scored in the World Series. It's a big night for St. Louis Sports fans.

-- Interception Seahawks! Bruce Irvin with his first interception of the year and the Hawks get the ball on their own 24.

-- At what point does the anxiety build, Hawks fans. First Quarter? Second? The Rams are definitely holding their own against the Hawks early on.

-- Rams get the ball at their own 36 and start with a hard run. Hawks aren't able to get much going here early.

-- Seahawks looking at 3rd and long deep in their own territory. Only 1 total yard so far from the Hawks. Just one first down so far.

-- Rams are doing a good job stopping the pass. A nice Marshawn Lynch run is negated by a flag. 2nd down and long with 4:03 left in the first quarter.

-- A long pass downfield for Kellen Clemens. The young quarterback is showing some skill early on.

-- Boom! What a hit from Brandon Browner for a loss off 3 yards to T. Austin.

-- Hate to see Sam Bradford out on the sidelines. He's a great young quarterback, and the Hawks would like to face the Rams full-tilt.

-- Wilson sacked at Sea for a 9 yard loss. The Hawks are going to punt from their own 10. Hate to see Wilson stay in the pocket like that. Rams have the ball on Seattle's 46-yard-line.

-- The play is immediately called back for an illegal hands to the face against the Hawks. So it's 1st and 17 with the ball on the Hawks own 7.

-- Seahawks catch a break with an illegal hands to the face penalty. Get the ball out and immediately complete a pass for a first down.

-- Hawks stuffed on their first run attempt. Have the ball DEEEEPPP In their own territory on 2nd down.

-- Rams are forced to punt. Seahawks get the ball deep in their own territory. Here comes Russell Wilson.

-- Gruden is calling the "Legion of Boom Viscious and Earl Thomas an MVP candidate.

-- First down from Keven Clemens on a 7-yard pass. First firstdown of the game.