NEW YORK --  After covering the Seahawks/Giants game at MetLife Stadium, my flight back from New York is delayed, which has given me some time to ponder some of the nuances of this trip, and this magical Seahawks season. 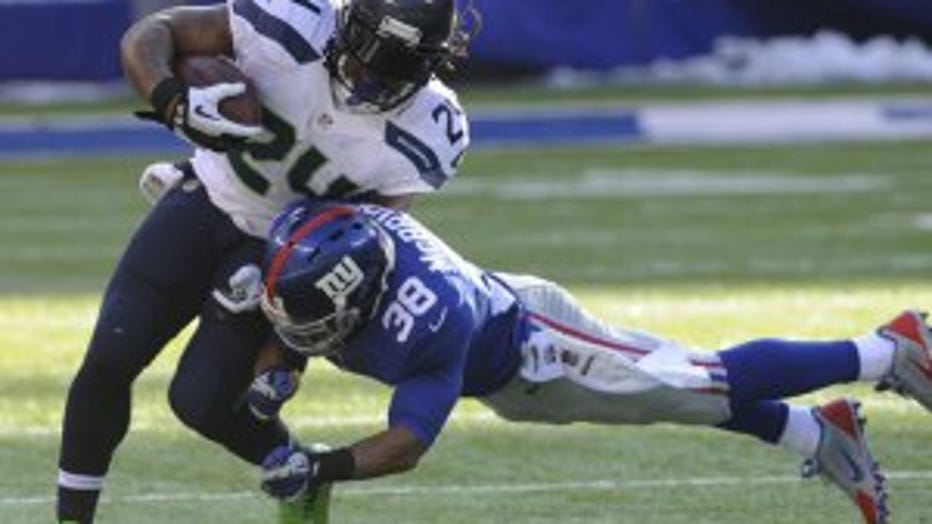 I guess I should begin at the beginning. I am a true 12. My dad and I had Seahawks season tickets from the very beginning — the first game the franchise ever played inside the Kingdome in 1976. I bleed Seahawks blue.  As some of you are probably aware, I have a very difficult time keeping my personal feelings out of my sports reporting — especially when I’m dealing with teams I am fanatically passionate about: (Seahawks, Sonics, Mariners, Sounders Huskies, Cougars). Maybe that’s why I love covering the Seahawks fans on the road.  I’m one, too.  I love trying to capture the passion of fervor of the The 12th Man. We are the best fan base in football. Period.

As Seattle sports fans, we have all been bludgeoned by unrealized expectations and heart-wrenching defeat so many times that you can’t blame us for being a little jaded about this Seahawks season. It’s so over-the-top spectacular, so undeniably satisfying to watch our Hawks become the most talented, exciting, deep and captivating team in the NFL. They have met every goal they have set for themselves, and seem to be on pace to achieve their ultimate stated goal at the beginning of the season: achieving home field advantage in the playoffs; not only that, the top seed in the NFC, a first round playoff bye, and home field advantage through the playoffs.  There’s a feeling the Hawks can’t be beaten at home (They haven’t lost a home game since December 2011), and the last time the Hawks held that top seed in the playoffs, in 2005, they did advance to the Super Bowl.  All the Hawks have to do is win one of their final two games, both of them at home, and the road to the Super Bowl runs through Seattle. The table couldn’t be set any more perfectly for the Hawks.

It’s almost too perfect.  Longtime Seattle fans know this feeling.  We have been disappointed too many times.  But we tell ourselves: “Is this what championship seasons feel like?” We don’t really know. It’s been so long.  We keep waiting for the rug to pulled out from  under us once again.  It feels like Our Year. But what does Our Year really feel like? I guess we will know for sure in a little more than a month when we board a flight for another trip to New York.

And speaking of New York as a host city for the first-ever cold weather Super Bowl, it is likely going to be a VERY cold weather Super Bowl. The Seahawks got an inkling of what the competing teams could be in for on Feb. 2 at MetLife Stadium this past weekend. The Hawks probably have a slight advantage over most other contenders in that they were able to get acclimated to the travel itinerary, the team hotel, the stadium, the turf, and the weather conditions.  Even though six inches of snow fell in the New York area on Saturday, the rain scoured it out by Sunday morning, and we were greeted by clear and cold conditions. Temperatures topped out at around 34 degrees.  It will almost certainly be colder in early February. New Yorkers I spoke with call that time of year the “real New York winter.” You can expect temperatures in the 20s with a high likelihood of snow.

The Hawks truly are the toast of New York today, after putting a 23-0 thumping on the Giants. New York fans seem to appreciate and respect  the way this team plays the game. Most Giant fans that I spoke with were impressed with the Hawks, and expect to see them back here in  February. They were also impressed with the showing of the 12th Man. Just eyeballing it, I’d say there were more than 8,000 Seahawks fans in the stands yesterday.  I heard a couple of young Giants fans on the way out, chanting “Sea-HAWKS!” “Sea-HAWKS!”  The 12th Man battle cry is pretty catchy.

New York is one of my favorite cities in the world.  I love everything about the city. There’s no place that can match the energy of Manhattan. Right now, the city is decked out in holiday lights, adding even more shine to a glittering gem of Americana.  I can’t even imagine how much more amped the city will be the Super Bowl in town, and several blocks of Midtown Manhattan closed to traffic to accommodate “Super Bowl Boulevard”, an football-themed, interactive experience for fans, right in the heart of Times Square.  It’s going to be nuts.

But that is then. As Russell Wilson says, there’s a long way to go.

Like a lot of Hawk fans, I’m trying to temper my enthusiasm.  The team has the right approach, calling each game “a championship opportunity.” Next Sunday’s game will be exactly that.  A win over Arizona will give the Hawks the NFC West title, and the top playoff seed in the NFC.

While I was in New York, I was doing a lot of reporting on what Hawk fans might expect if they come to New York for the big game in February.  These are stories that we put “in the can”, to air later, in the event the Seahawks do end up in that game.  Notice how I still avoid using the “S” word in relation to the Hawks?  I can’t help it.  I really don’t want to jinx anything.

Oh, and by the way, I am proud to say that I am officially NOT a jinx.  The Seahawks had lost the previous two games that I traveled to cover, and some friends accused me of being bad luck.  I hope this win puts that silliness to rest.  Heck, if that was the case, I would recuse myself from covering the uh, game in February at MetLIfe Stadium.