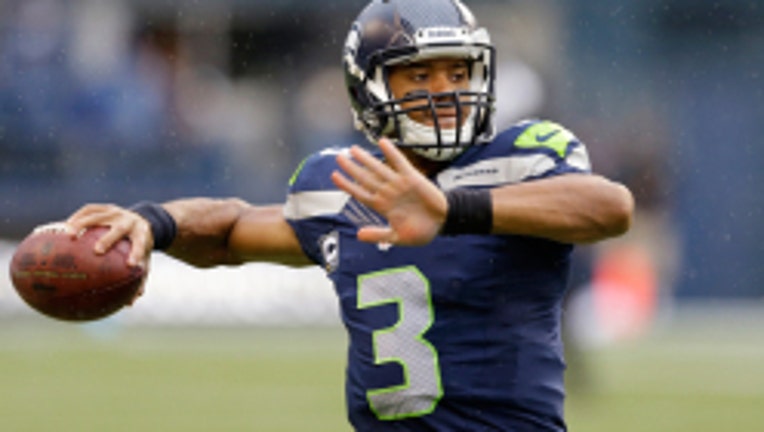 SEATTLE -- If Hawks fans have one thing to complain about in the Seahawks' win over the Jacksonville Jaguars Sunday, it's that the outcome seemed decided from the start.

The Hawks' lived up to their expectations and even surpassed Vegas' 19-point spread, with the hometown favorites taking down the Jacksonville Jaguars 45-17 to improve to 3-0 on the season. The win marked the 10th consecutive victory at CenturyLink Field for the Hawks.

The scoring started early, with Russell Wilson connecting to Zach Miller to cap a 7-play, 71 yard drive with 8:09 left in the first quarter. And the scoring just continued through the entire game, with Wilson connecting for four touchdowns and one interception before backup quarterback Tarvaris Jackson replaced the second-year starter in the third quarter.

But even Jackson didn't let up, going 7-for-8 and 129 yards passing, including a 35-yard touchdown pass to Doug Baldwin in the third quarter.

The Hawks picked apart the Jaguars on all angles, gaining 479 yards of total offense,  including 69 yards on seventeen carries for Marshawn Lynch. The defense also held strong, keeping the Jags to 265 yards and not allowing a touchdown until a 2-yard run by running back Maurice Jones-Drew with 6:25 left to go in the third quarter. The Hawks led in total yards, quarterback rating, time of possession and red-zone scores. They also intercepted struggling back-up quarterback Chad Henne twice and recovered two fumbles. The team even held themselves to just four penalties for 45 yards, elevating the constant thorn-in-the-side of penalty losses.

The Hawks will have a bit more of a challenge next Sunday as they head down to Houston to face the 2-1 Texans. Game time is 10 a.m. on Q13 FOX.

Updates from the game

-- Kam Chancellor gets a an interception.  Returns it 32 yards to close to the 50-yard-line. Hawks lead the league in takeaways.

4th Quarter -- Jags have scored 10 points in the third quarter. That's nearly what they've scored all season prior to this game.

-- Touchdown Seahawks. Doug Baldwin comes up with a great catch to put the Hawks up 38-10 with 1:28 to go in the third quarter.

-- Christine Michael is in the game along with Tavaris Jackson. Starting to see some backups come in.

-- Red Bryant has a back problem and his return is questionable. Jags have the ball on their own 23-yard-line.

-- Jaguars are on the board with only their second touchdown this season. Hawks lead 31-7 with 6:20 left to go in the third quarter.

-- Ball is tipped up and intercepted. Jags have the ball on the Hawks 10-yard-line.

-- Russell WIlson has four TDs. The last time he did that was 2012 against the 49ers. Wilson is still in, and the CBS announcers are talking about sitting him.

-- Seattle gets the ball after a Jacksonville turnover. They lead today's turnover ratio 2-1 and are on the Jags' 29.

Third Quarter -- Jacksonville has a third and four, completes the pass for a six-yard gain.

Hawks lead the Jags 24-0 at the end of the first half.

-- Seattle goes up 24-0 at the end of the second quarter. Everything is looking roses for the Hawks. The drive was 79 yards in five plays. Will we start to see the starters come out?

-- Bobby Wagner tips the ball, gets an interception. Golden Tate gets a completion and comes down to the Jags 47-yard line. 29 seconds left to go in the first half.

-- Hawks defense is really looking dominant here late in the second quarter. Henne has to take a timeout to asses their options with 1:22 left to go in the first half.

-- Wilson stripped of the ball by the rookie strong safety. Jacksonville recovers the ball and has it on the Seahwks' 45.

-- Jermaine Kearse is out with an ankle injury. His return is questionable. The Hawks have the ball on their own 15.

-- Henne rushes for a first down. It's their second consecutive first down on this drive. Jones-Drew is starting to pick up steam.

-- Jags get the firstdown on a run. It's their first first down of the game, and the first time they've been past their own 30. It's the little things that they're looking for now.

-- There have been 124 fasle starts at CenturyLink Field, the most in the NFL since 2005. Marshawn Lynch takes the ball to the 1-yard-line. Third and goal.

-- The Hawks have kept the Jags to -4 yards of total offense into the second quarter. Not bad. Tate takes the ball to Jacksonville territory.

2nd Quarter -- Another touchdown to Zach Miller from Russell Wilson. Hawks lead 14-0  with 14:26 left to go in the 2nd Quarter.

--The Hawks are moving the ball well near the end of the first.  Golden Tate catches a 3-and-10 pass from Wilson for a gain of about 20 yards. Put the Hawks at first and goal.

-- Another three and out for Jacksonville. They punt deep from their own end-zone. Golden Tate gets the ball around midfield.

-- Wilson goes down on a three-man rush. First sack of the game from the Jaguars.

-- Lynch again gets a strong gain. Could we see an 100-yard game from him? Also, the touchdown drive was only seven plays in 71-yards. Pretty quick if you ask me.

-- Henne comes up way short on a third and long incomplete pass. Jacksonville has to punt on their second straight third and out.

-- Touchhhhhdowwwn Seahawks. Quick play-action play for a Russell Wilson TD pass to Zach Miller. Hawks go up 7-0 with 8:04 left in the 1st quarter.

-- Pete Carroll threw the challenge flag, contesting that Marshawn Lynch didn't get across the goal line. We'll see what happens.

-- Marshawn Lynch gets a 25 yard gain. Followed up by a 15-yard pass to Luke Wilson to put the team at first and goal. Offense starting to come alive on this second drive.

-- Golden Tate gets a quick reception for a 20 yard gain. So much for the defensive struggle and the rain, huh?

-- Jacksonville goes three-and-out to start. Could see a defensive struggle today with all the rain.

-- The drive stalls on a third down dropped pass. Ryan punts about 47 yards and the good coverage puts the ball at the 25 for the Jags first drive.

-- Again, this is the largest spread in franchise history. Does that shake or help your confidence?

-- Kickoff! Jermaine Kearse brings the ball out the 18-yard-line.