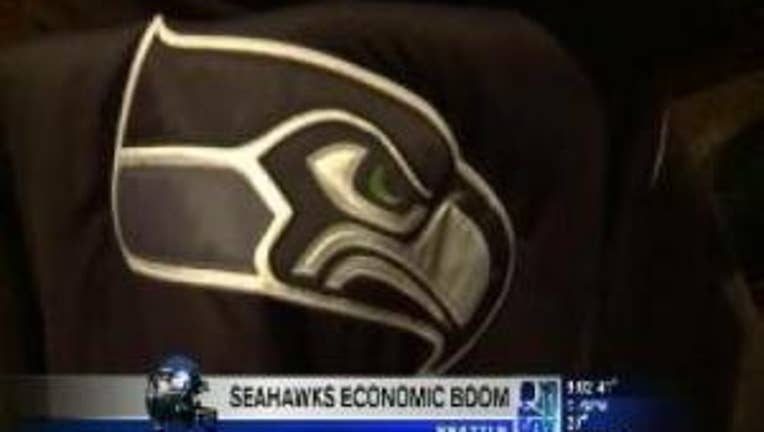 SEATTLE -- As the NFL season comes to an end, the hype surrounding the Seahawks is at an all-time high. When the Seahawks win, fans spend money.

And that provides a boon for the local economy. Kevin McCluskey, the manger of the Sports Den in Seattle said that with the Hawks winning, fans can't get enough gear.

"It drives it tremendously," McCluskey said. "Everybody likes a winner.”

Everything is flying off the shelves, McCluskey said.

Vicki Orser has been a Seahawks fan for life, but even she can't resist spending more.

"Just because I can't stay away, it's like an allergy," Orser said. "I'm just addicted to it. Original season ticket holder and my money all goes in here somehow.”

The Elysian Brewery is just a Russell Wilson throw from Century Link Field. This last Sunday, when the Hawks knocked out the Niners, it was one of the busiest days on record.

Bret Ritchlin is an employee at Elysian.

"There's sort of a vibe when they are crushing another team," Ritchlin said. "People don't want to let that go. You see an increase in business. They stay out later and later. They drink more and more. They just don't want that feeling to go away.”

That feeling keeps a guy like Bill Geddie coming back for more. He travels five hours from Victoria, B.C. to see the Seahawks.

"You know it's an electrifying type deal every week,” Geddie said.  “You come and it's a lot more exciting when the team is doing well.”