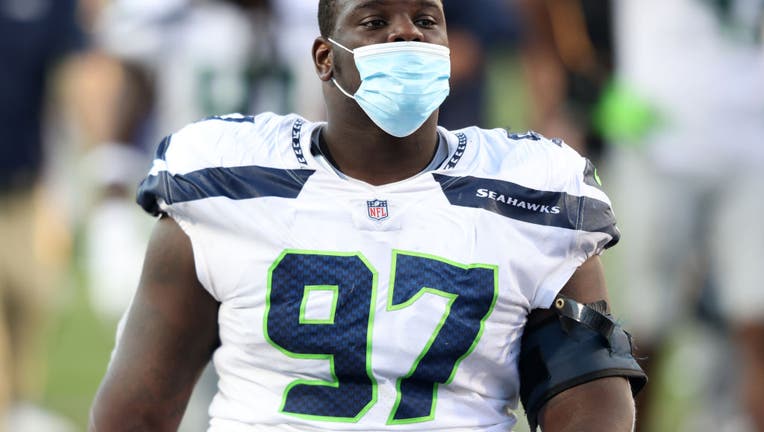 ORCHARD PARK, NY - NOVEMBER 08: Poona Ford #97 of the Seattle Seahawks after a game against the Buffalo Bills at Bills Stadium on November 8, 2020 in Orchard Park, New York. (Photo by Timothy T Ludwig/Getty Images)

RENTON, Wash. - The Seattle Seahawks have signed defensive tackle Poona Ford to a two-year contract, locking up one of the key pieces of their defense.

Ford’s deal was announced Wednesday after the start of the new league year. He was a restricted free agent and the NFL’s official transactions showed the Seahawks placed a second-round tender on the burly defensive tackle. But the two-year contract will take the place of the tender and keep Ford from reaching free agency for one more season.

"It's a great feeling," Ford said after signing his contract, according to Seahawks.com. "Ever since I got here, Seattle always felt like a home away from home for me, so I'm glad to still be here."

Ford, 25, was another gem uncovered by Seattle. He signed with the Seahawks as an undrafted free agent in 2018 despite having been the Big 12 defensive lineman of the year his final season at Texas. Ford started just one game as a rookie in 2018, but proved to be a valuable option to help stop the run.

He became a starter in 2019 and has started 30 of 31 games played the past two seasons, while also expanding his role to being more of an interior pass rusher. Ford had 32 total tackles in 2019 and last season had 40 tackles and two sacks.

The Seahawks did not tender contracts to five other restricted free agents, highlighted by linebacker Shaquem Griffin. Also not tendered were running back Patrick Carr, guard Jordan Simmons and defensive backs Linden Stephens and Jayson Stanley.

The Seahawks moved quickly to address a need in the defensive backfield. They are expected to sign former San Francisco cornerback Ahkello Witherspoon, according to a person with knowledge of the deal.

The person spoke to The Associated Press on Tuesday on the condition of anonymity because the deal has not been finalized and cannot be announced by the team until after the new league year begins on Wednesday.

The addition of Witherspoon was a critical move for the Seahawks after starting cornerback Shaquill Griffin agreed to a three-year deal with the Jacksonville Jaguars earlier Tuesday.

Witherspoon is a likely candidate to take over the starting spot left open by Griffin’s departure, with D.J. Reed and Tre Flowers expected to compete for the other starting cornerback job. Seattle still will need additional depth at the position with Quinton Dunbar possibly departing in free agency.

The deal with Witherspoon is the only move by the Seahawks so far, continuing with their traditional approach of being mostly quiet in the first waves of free agency.

The Niners picked Witherspoon in the third round of the 2017 draft and he showed good flashes as a rookie while starting nine games on a team that struggled defensively.

He had an inconsistent second season when he allowed seven TD passes in coverage, according to game-tracking data from SportsInfo Solutions, but still began the 2019 season as the starter.

Witherspoon hurt his foot early that season and struggled when he returned, allowing seven more TD passes, according to SIS. He was eventually benched for Emmanuel Moseley before San Francisco’s playoff run that reached the Super Bowl before losing to Kansas City.

Witherspoon played better in 2020 when healthy but the Niners didn’t make a strong run to keep him after agreeing to deals with cornerbacks Jason Verrett and Moseley.

Witherspoon has four interceptions and 24 passes defended in 47 career games.