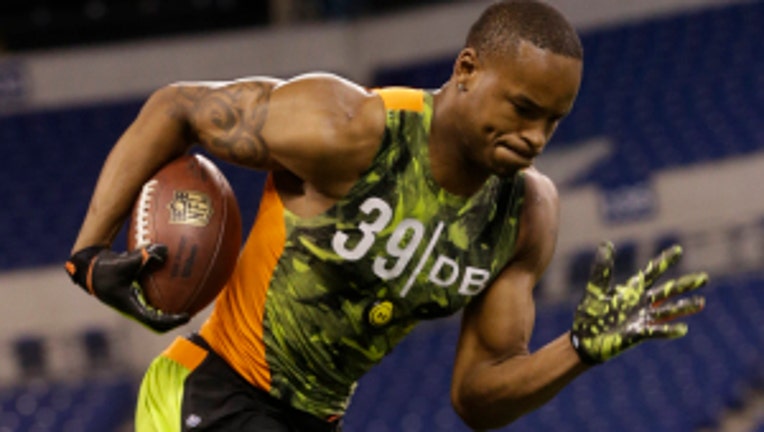 LSU cornerback Tharold Simon was drafted in the fifth round by the Seahawks. (Photo courtesy of seahawks.com)

RENTON -- In case you haven’t noticed, Pete Carroll likes his cornerbacks tall, long and physical. And the Seahawks’ coach thinks he has found another one in Tharold Simon, a 6-foot-2, 202-pounder who was selected in the fifth round of the NFL Draft.

“He did a good job,” Carroll said during his minicamp wrap-up Q&A with the media. “He fits the profile of the big guys that we like. He’s long. He’s an aggressive kid. He has good savvy, can anticipate routes and things.

“By the time we get him to (training) camp, I would think he can compete with our guys. He looked kind of in the fashion of guys that we like.”

On Sunday, Simon was working on the right side with the No. 1 defense – the spot where 6-4, 221-pound Brandon Browner has been the starter the past two seasons. Saturday, Simon got some snaps on the left side – where 6-3, 195-pound Richard Sherman developed into an All-Pro corner last season after moving into the starting lineup midway through his rookie season in 2011.


The incumbent backups are Walter Thurmond, Jeremy Lane, and Byron Maxwell – each a draft choice since Carroll arrived in 2010, as well as second-year pro DeShawn Shead.


O’Hara Fluellen, a cornerback from Lincoln, was one of the 37 players at this camp on the tryout basis. On Sunday, he made several nice plays – tipping away a pass intended for draft-choice wide receiver Chris Harper along the sideline; jumping in front of the receiver to intercept a pass thrown by tryout QB Jake Mullin; and deflecting another pass to draft-choice tight end Luke Willson.

Asked if there were any surprises among the tryout contingent, Carroll singled out Justin Veltung, a wide receiver from the University of Idaho and Puyallup High School; and Benson Mayowa, a defensive end from Idaho.

“There were a number of guys that showed some stuff. We’ve got some big decisions to make to try and figure out how we’re going to round out the roster here with five or six guys.”

Which of the tryout players is signed remains to be seen.

“It’s unfortunate, because this is a very difficult team to make and fewer of these guys will get the opportunity to do that,” Carroll said. “But those who do will have earned it and if they can make it through the rigors of camp and early preseason, it will be really exciting.

“Some of these guys won’t play football again. This might have been their last day on a football field. So we tried to show them that we really did appreciate and respect the heck out of what they did for us.”

The veterans return on Monday to begin the final week in Phase 2 of their offseason program, and the lines during drills will be longer because the team’s 11 draft choices and seven of the eight rookie free agents signed after the draft also will be on hand.

“We’re already picturing how (the rookies) are going to fit in,” Carroll said. “The way to do it really is that we’re going to try and champion the strengths that they have – put them in situations where they can be successful early; not ask them to do a lot of things that are unfamiliar to them. With the thought of trying to build their confidence and a sense that they belong and can fit it. Then we’ll expand.”