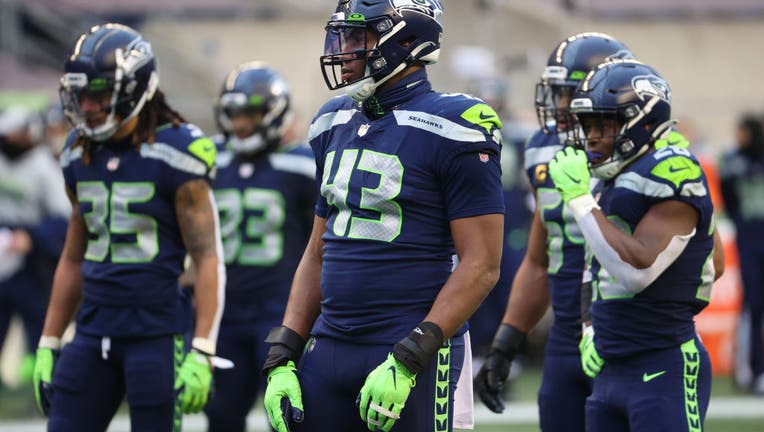 SEATTLE - As Russell Wilson and the Seattle Seahawks walked to the line of scrimmage to run out the remaining two minutes of clock, boos rained down on the team from the 15,758 fans in attendance at Lumen Field.

After all, it was the first time fans have been able to watch the Seahawks perform in any fashion inside Lumen Field since the end of the 2019 regular season. All nine of Seattle’s home games last season came without fans in attendance.

So even some well-natured boos were a welcome occurrence for the Seahawks.

"It was fun for our guys to have that whole setting," Carroll added.

The practice saw Wilson unofficially complete 13 of 20 passes for 196 yards, running back Chris Carson score the only offensive touchdown, and defensive tackle Poona Ford scoop up a fumble for a 15-yard defensive score in a 22-3 win over the Blue team. It was the team’s rehearsal before their first preseason game of the year next Saturday on the road against the Las Vegas Raiders.

"That was a really good day," Carroll said. "That was what we wanted to get done. We wanted to get over here, get the feeling of what it’s like to be at Lumen Field. … The guys did a really nice job of using their imagination to make this a good event that will make some sense for us as we come back in a couple weeks. We accomplished a lot."

The team was rather short-handed at a couple positions. Tackles Jamarco Jones (back spasms), Cedric Ogbuehi (biceps strain) and Tommy Champion (groin) all were hurt in Saturday’s practice and held out. With starting left tackle Duane Brown and safety Jamal Adams both not practicing as part of contract disputes, the team was testing its depth to get the practice completed.

Carroll said that Brown is "making a statement" about his contract, which is set to pay him $10 million in base salary in the final year of his deal.

"He’s making a statement about what he feels he needs to have happen," Carroll said. "He’s not going to play in preseason. He wasn’t going to. It’s not going to make a difference right now."

Wilson uncharacteristically expressed displeasure this offseason at "getting hit too much." He made clear his hope the Seahawks can resolve Brown’s situation.

"Not having Duane Brown out there is a pretty significant deal. ... We’ve got to figure that out because we need Duane Brown," Wilson said.

Wilson and the Seahawks’ offense is working to get up to speed with new offensive coordinator Shane Waldron. Wilson said Waldron’s offense allows him to have more plays to change to at the line of scrimmage than he’s had previously and the trust to change it up based on what he sees on the field. Wilson is bullish on what the team can accomplish offensively this season with Waldron calling plays.