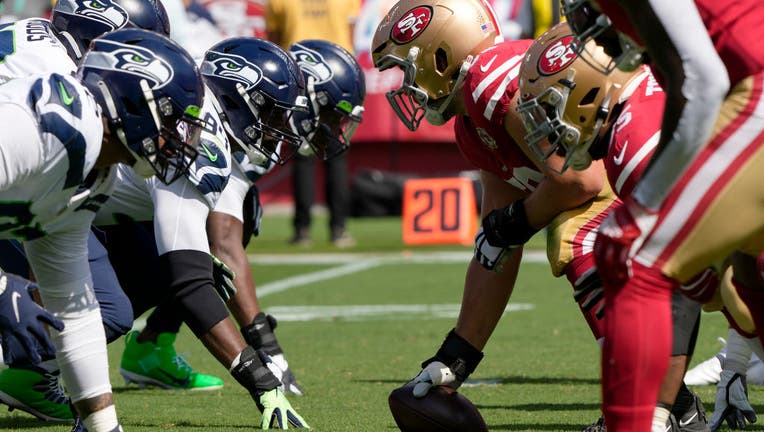 SANTA CLARA, CALIFORNIA - OCTOBER 03: Seattle Seahawks defense lines up against the San Francisco 49ers offense during the first quarter of their game at Levi's Stadium on October 03, 2021 in Santa Clara, California. (Photo by Thearon W. Henderson/Ge

RENTON, Wash. - In one afternoon, the Seattle Seahawks avoided their first three-game losing streak in a decade by beating a division foe on the road and yet still didn’t prove much in the process.

There are many questions still circulating around the Seahawks despite Sunday’s 28-21 win over San Francisco.

Russell Wilson was great and accounted for three touchdowns. But his offense was awful for the first two quarters failing to pick up a first down on the opening five drives of the game.

Seattle’s defense gave up 457 total yards and was the beneficiary of San Francisco losing starting QB Jimmy Garoppolo at halftime to a calf injury and playing without starting kicker Robbie Gould.

There was a lot of good fortune that fell in Seattle’s favor. And while there were certainly positives for the Seahawks, the context of how they got to 2-2 still leaves plenty unanswered with a short week and a visit from the Los Angeles Rams on Thursday night.

"We don’t lose three games in a row here," Seattle left tackle Duane Brown said. "Once you get into division play, the magnitude of those games and everything that goes into that. Coming on the road in this kind of environment with a real good team over there, we knew the challenges that waited for us."

Wilson had one of his most efficient days and continues to be exceptional at taking care of the ball. He threw for only 149 yards, but accounted for three of Seattle’s four TDs with a pair of touchdown passes and a 16-yard TD run. Seattle coach Pete Carroll was pleased with the adjustments Wilson made at the line of scrimmage, especially after the Seahawks were stuck in neutral for most of the first half.

Wilson is one of two quarterbacks in the league with at least 100 pass attempts this season that has not thrown an interception. Denver’s Teddy Bridgewater is the other.

"I was really proud of that outing and thought it was one of his one of his classics," Carroll said. "To me, it’s one of the real special ones."

Since an impressive showing in the season opener, Seattle’s pass rush has been very inconsistent in the three weeks since. The Seahawks managed just two sacks against the 49ers, after having only one the week earlier versus Minnesota. One of the two sacks Sunday came on a blitz from linebacker Jordyn Brooks.

Seattle’s defensive front must start getting the kind of pressure it did in Week 1, when the Seahawks had three sacks and 10 QB hits all coming from the defensive line or edge rushers.

And the Seahawks may be thin this week with Carlos Dunlap (toe) and Darrell Taylor (ankle) getting injured against the 49ers. Benson Mayowa (neck) was inactive against San Francisco.

Ryan Neal proved last year he could be a valuable asset in the secondary filling in for Jamal Adams when he was out with injury. But Neal had barely seen the field with the exception of special teams until Sunday. In hindsight, that seems like a mistake by the Seahawks. Neal was excellent in his 26 defensive snaps, recording five tackles and a pass breakup. Playing Neal more would seem to allow Adams more freedom to be a disruptor.

Who knows if 2018 first-round pick Rashaad Penny will ever end up having a role for the Seahawks? Penny was placed on injured reserve Saturday, knocking him out for at least three more weeks due to a calf injury suffered in the season opener. Combined with an impressive afternoon by Alex Collins as the backup to Chris Carson, it seems unlikely Penny will have much of a role when he’s eligible to return from the IR.

While the defensive line is a concern due to the injuries suffered by Dunlap and Taylor, the Seahawks may have TE Gerald Everett back. Everett tested positive for COVID-19 last Wednesday but returned a negative test on Monday, Carroll said. Since Everett is vaccinated, if he returns another negative test Tuesday he could be cleared to play against his former team.

223 — Seattle was outgained 457-234 by San Francisco in total offense, but the Seahawks avoided major penalties and had zero turnovers. It was just the 12th time in the past 10 seasons a team was outgained by at least that margin and still won.

There is very little turnaround time with Thursday’s showdown at home against the Rams. It’s the first meeting since last January’s NFC wild-card playoff game won by Los Angeles 30-20. The Rams have won three of the past five in Seattle.