To watch the story click: Story on Seahawks lifting Green Beret to return to battlefield

SEATTLE -- Green Beret Ryan Hendrickson says in his darkest days, the Seahawks were there for him.

For the 41-year-old member of the U.S. Army Special Forces, his deep connection with his favorite team began half a world away, in Afghanistan in 2010, when Hendrickson stepped on an improvised explosive device.

“The explosion and the flash happened," Hendrickson said. "I remember I was on the ground. I was trying to stand up but I couldn’t. I kept falling over. As the dust slowly started to clear, I was like, 'what is going on here?'”

The blast severed his right leg. It would take doctors 27 surgeries to reattach it. During Hendrickson's time in the hospital, the Seahawks learned about Hendrickson's love of their team. 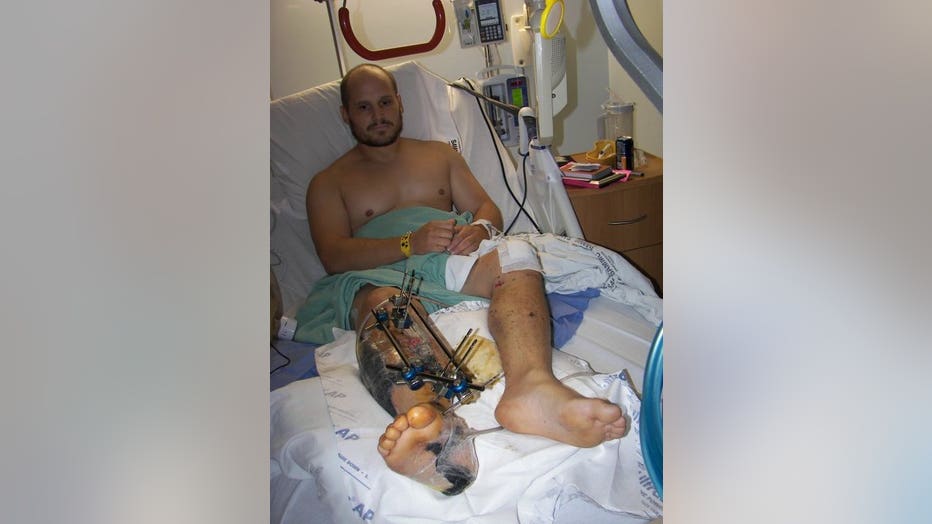 “I get invited to come to Seattle. To meet with Pete Carroll. To see the team,” he recalls with a smile. “Matt Hasselbeck, Marshawn Lynch, Richard Sherman, just everybody it was awesome.”

Hendrickson, in a wheelchair with his injured leg extended, spent the day connecting with those coaches and players.

He said, “To take the time to care about a soldier and actually care. They don’t have to care, but they did. Pete Carroll didn’t have to, but he did. Psychologically it’s a boost.” 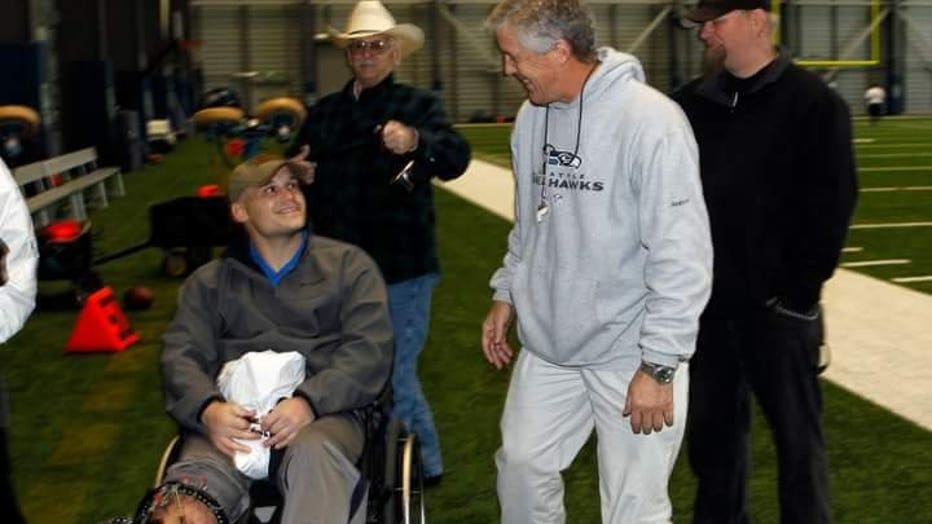 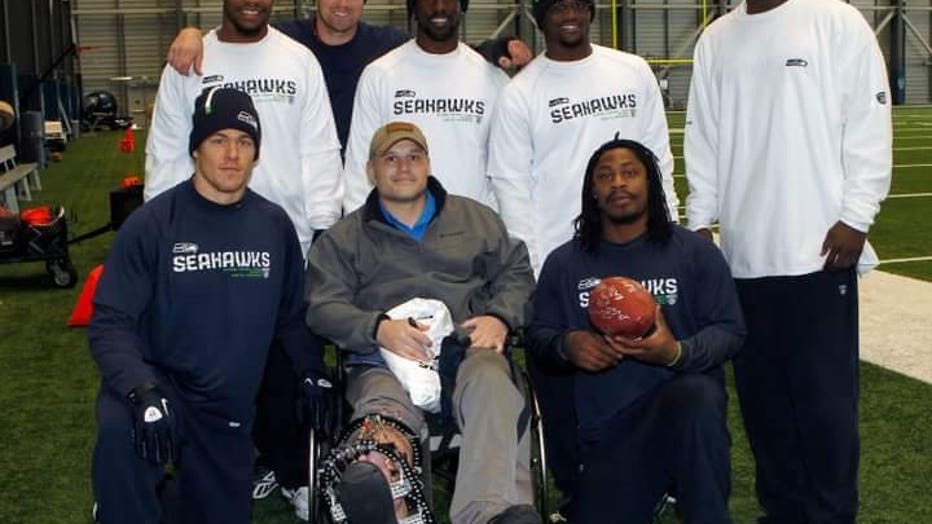 During that visit, the team gave Ryan a gift -- a Seahawks flag. It would serve as motivation, as he defied the odds during rehab. Fourteen months after the blast that nearly killed him, Hendrickson rejoined his unit in Afghanistan.

Why did he want to go back?

“The Taliban couldn’t beat me. I had to get back into the fight for myself,” he said.

Inside his body armor, he carried that Seahawks flag given to him by the team.

Every time it was safe during his five additional deployments to Afghanistan, in 2012, 2016, 2017, 2018, and 2019, Hendrickson would proudly fly the flag. Even his comrades who aren’t Seahawks fans learned, it was best to just go along. 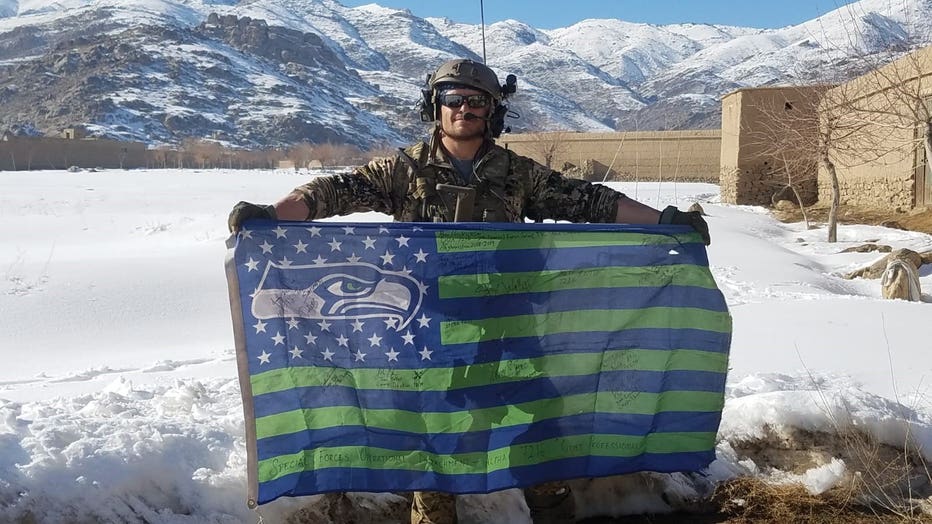 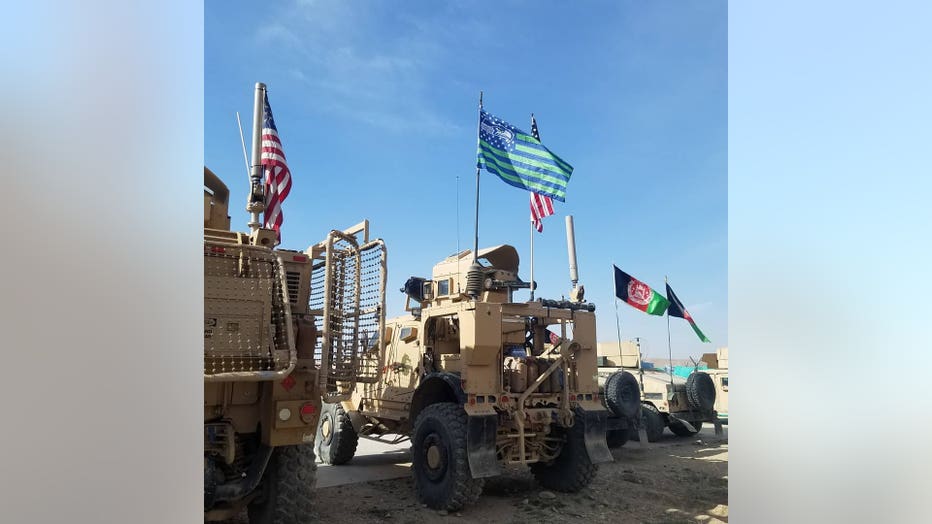 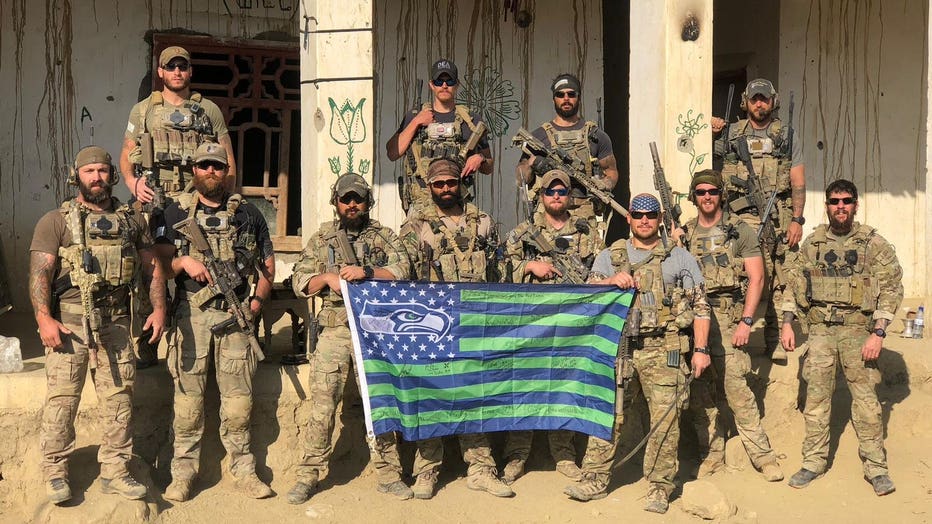 “The Seahawks were there," he said.  "At the most critical point in my military career. I stepped on an IED and I wanted to carry that flag with me every trip that I went on. Wherever my body armor went with me, that flag went with me.”

With his deployments complete, Hendrickson came back to Seattle this season.

Holding up the flag, he told the team, “You can see, it’s just been war-torn and beat up, but I still got it.”

This time it was his turn to provide the motivation and bring the flag that’s been through war back home. He handed the flag to Carroll, who hugged him as the team cheered.

“There’s some bullet holes in it and what not," Hendrickson said about the flag. "I kind of told them. I don’t think the Taliban are really fans of the Seahawks.” 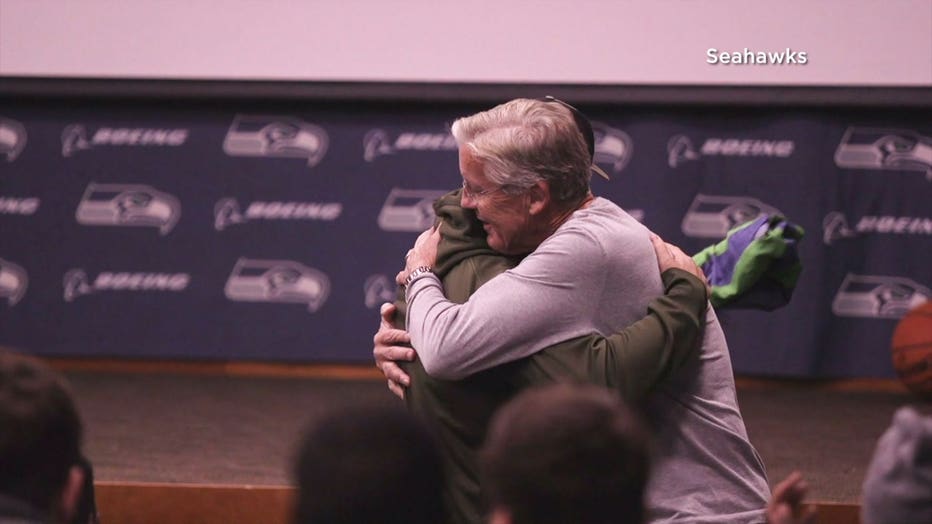 They say the best gifts are the ones that show gratitude. The Seahawks appreciation was on full display, running Ryan’s flag out of the tunnel. 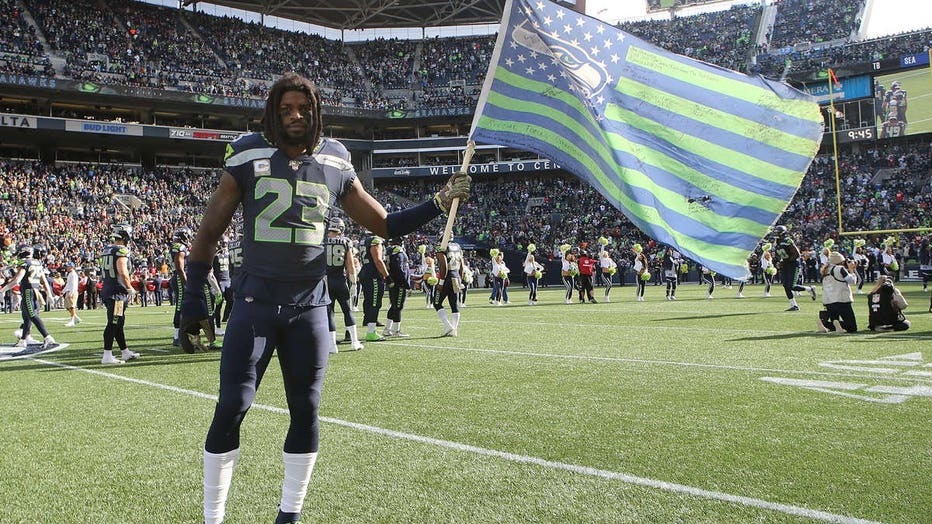 Then, it was Ryan’s turn to raise the 12 flag, getting the honors of the ritual high above Centurylink Field before kickoff.

In the moments after he brought tens of thousands of fans to their feet, he said, “From being a Seahawks fan as a kid, and everything they did for me when I got blown up in 2010, everything they do for veterans, then I get a chance to do that. Awesome. Awesome man.”

Flags are symbols connecting us to something bigger than ourselves. A soldier and the Seahawks learned just how significant that connection could be. 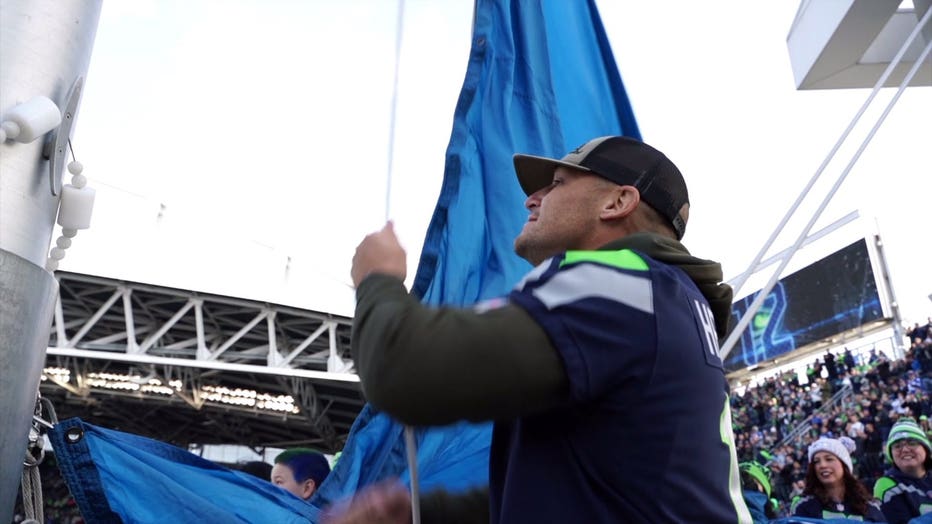