SEATTLE -- The countdown is on for Wednesday's huge Seahawks parade, but right now there are still a lot of fans trying to get back to Seattle from their Super Bowl weekend. 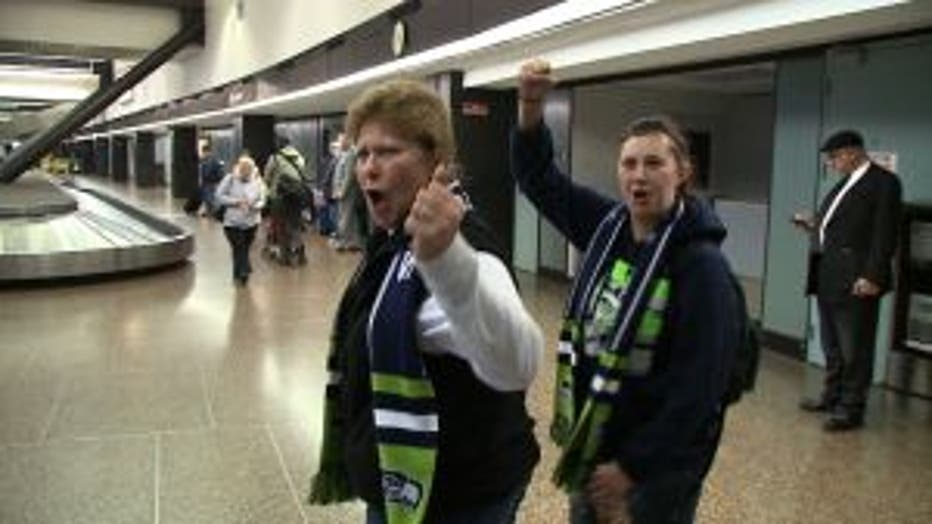 Seahawks fans have been bounced from airport to airport all over the country – just trying to get out of New York’s nasty snowstorm.

“I landed in L.A. about 2:15 this morning,” said Stewart Hill who finally got to Seattle on Tuesday. “I slept on a bench at LAX and finally caught a flight to Seattle this morning.”

Most 12s were in good spirits even though some have spent the past two days just trying to get home.

Mike McGraw was stuck in Philadelphia and only landed in Seattle Tuesday morning.

“They didn’t have pilots for the plane. So we got stuck six hours,” said McGraw.

The nasty snowstorm struck right after Superbowl 48 when most fans were trying to get out of the Northeast.

Even the Seahawks’ charter flight was delayed – they didn’t land in Seattle until Monday evening.

On Tuesday, a slow but steady stream of Seahawks fans are finally touching down – and hopefully their baggage made the trip, too.

Most say the delays are a small price to pay for a Superbowl victory.

Those fans are the lucky ones – they’re already back in town. There are still more flights coming in from New York filled with sleepy fans just trying to get here in time for Wednesay's Seahawks homecoming parade.