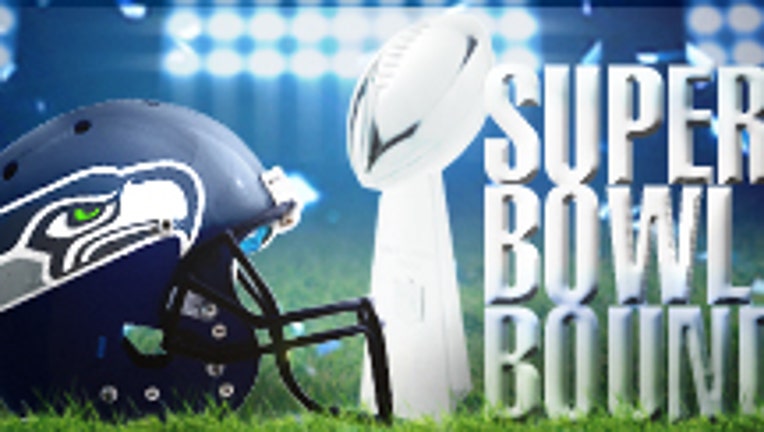 SEATTLE - There are a lot of 12s out there. Some fans are realizing there might not be enough Super Bowl tickets for all of them.

Theron Morgan has a lot of Seahawks memorabilia. He’s been a season ticket holder since the beginning.

“We kept saying they're going to go to the Super Bowl one of these days,” he says. “It was just a matter of time.”

Morgan is thrilled that time is here. But he’s not sure he’s sure he’ll be able to go when the team heads east in a couple weeks. There’s so much interest in Super Bowl tickets, the team had to put all season ticket holders in a lottery for the chance to buy them. Being a legacy ticket holder doesn’t help Morgan.

“Why wouldn't those first people who really supported this team all along, why shouldn't they be there?” he wonders.

Getting the tickets is the problem for some fans. For others, it’s being able to afford the trip to use them.

“All 68,000 who were there last night would love to go to New York and represent their team,” says John Lloyd. “But there’s a lot of expense that goes into that besides tickets.”

Lloyd isn’t sure whether he’s going to go to the game, or give one of his fellow fans the opportunity. Arthur Clemens has no such doubt.

“I was so happy,” he says. “I was already booked up to go and had everything but the ticket. This makes it complete.”

There’s no special treatment when it comes to the Super Bowl. Tim Kennedy’s friends think he deserves tickets, because he was one of the fans who helped name the team when they first came to town.

“Seahawk was a name that sounded kind of cool,” he said. “It was a type of bird we had around here.”

Back then, he says it felt like he had a personal connection to the team. But now he says they belong to the whole city and a whole lot more fans around the country. So he understands he won’t always be able to cheer them on in person.

“I would love to go to the Super Bowl, but we'll all be there in spirit.”